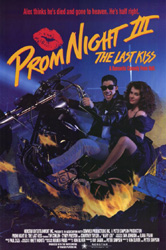 Synopsis: Thirty years ago prom queen Mary Lou Maloney died in a fire at Hamilton High. But this hot tomato just won’t stay dead. She’s come back… for some fun. She falls in love with a handsome hunk, Alex, and suddenly the boy is earning straight A’s and scoring for the football team, as well as with the lovestruck Mary Lou.

But Mary Lou’s magic turns to murder when anyone gets in her way. As the body count grows, Alex is no longer sure he can handle this vicious vixen. But there is no escape, as Alex learns when he dares to resist Mary Lou’s hot lips.

“School sure changed since I was a kid”

‘Prom Night III: the Last Kiss’ is more or less the sequel to a film that is not really a sequel to its predecessor. To criticize this effort by saying that “they don’t make ’em like they used to” is a moot point, because they never really tried. That’s like comparing Diet Crystal Pepsi with its original. I mean, really, what’s the point?

This third entry in the so-called canucksploitation movie series, returns Mary Lou Maloney, the villainous prom queen from ‘Hello Mary Lou: Prom Night II‘, to Hamilton High, where she promptly begins an obsession with one of the students, Alex, and interferes with his life in an attempt to keep him all for herself. Obviously, people die.

Alex, an average boy of average ability and average ambition, is struggling to make it through high school and to keep his relationship afloat: he and his sweet, amiable girlfriend, are constantly at odds. But now he has to contend with Mary Lou, who has not only cast a spell on him, but is making him bury the bodies in her stead.

What will he do? How can he stop Mary Lou? And how can he get her out of his mind?

I had never wanted to see ‘Prom Night III’. I already had mixed feelings about ‘Prom Night II’ and, when I saw the poster for it in the local newspaper listings, decided that it looked too corny for my taste. But, a couple of years ago, my gf gave me the boxed set for my birthday. It was clear then that I would end up seeing it, despite myself.

‘Prom Night III’ feels more like a low-budget teen comedy than a B-movie horror picture: it’s like a bad episode of ‘90210’ with supernatural horror elements thrown in. In some ways, it made me think of a poor man’s ‘Buffy the Vampire Slayer‘. However, having never watched the beloved TV show, I daren’t say this too loudly, lest I get staked.

It begins with what I suppose is meant to be Hell – which just looks like your average grimy underground club, and with a bunch of chained girls dancing to a lame choreography. Some girl, who it will turn out to be Mary Lou (it’s a different actress, so who’s to know this at first?) takes out a file or some such object and breaks out of her chains.

And escapes to Hamilton High. Unfollowed.

It doesn’t take a genius to see that there are countless problems with this intro. Firstly, the last time we saw Mary Lou, she had possessed Billy and they were driving off with Vicky and Craig. Then there’s the fact that we are poorly situated, that Mary Lou suddenly escapes so easily, goes back to whence she came, and no one bothers to track her down.

And that’s just the first 90 seconds!

But, ultimately we realize that it doesn’t matter. The filmmakers didn’t care about these details: they just wanted to have fun with a pre-established setting and villain, much like Jason Voorhees and Crystal Lake, Freddie Krueger and Elm Street or Michael Myers and Haddonfield. They wanted to take familiar elements as their playground.

And play they did.

The first opportunity came with the opening of the new school gymnasium, preceded by a rambling, hilariously inappropriate monologue by the school principal – who proceeds to cut off his finger instead of cutting the ceremonial banner. Absolutely ridiculous, but we already know that the picture is going for a certain degree of campiness.

That’s fine, and mixing horror with camp is a long-standing tradition – one that had been revived in the mid-’80s. It makes sense contextually, and I can certainly appreciate a level of it (case-in-point: ‘Army of Darkness‘, ‘Braindead‘ and ‘Elvira, Mistress of the Dark‘). But I never expected ‘Prom Night III’ to go for flat-out comedy.

There’s a scene in which Alex is called to the guidance counsellor’s office. He sits down and takes a barrage of criticism from her. But there’s a plant obstructing his view – so he spends much time trying to cock his head to see around the protruding vegetation, in a scene that reminded me of ‘Inspector Clouseau’ (except less clever).

This is when I realized that the film was going for broke and ramping up the comedy that had begun to influence the series in the previous installment. It wasn’t going for chills and gross out more so than it was going for squeals of delight from its audience. Except that, where the last one was ironic, this one is frequently merely corny.

The humour extends to the way in which the victims are dispatched:

In the casting department, there a couple of interesting choices surface in ‘Prom Night III’. There’s the fact that Mary Lou looks a lot like Sherilyn Fenn – at a time when ‘Twin Peaks’ was all the rage. And then there’s the nerd, who dance at the prom in a fashion not dissimilar to Crispin Glover’s in ‘Back to the Future‘. Coincidence? I think not.

But what’s more intriguing is that it has a couple of moments that are reminiscent of “Terminator 2′, which was made by Canadian director James Cameron only 2-3 years later: Mary Lou goes through some prison bars much like the T-1000 did (but without the snag), and Sarah turns into a powerhouse, kicking Mary Lou’s ass (in a moment reminiscent of ‘Aliens‘).

Did James Cameron see ‘Prom Night III: The Last Kiss’ and taken some inspiration from it? Could Ron Oliver be a pseudonym for Cameron? Ha! I don’t believe that one bit, but it amused me to see some parallels (truth be told there’s another scene that also made me think of ‘T2’, but I’ve forgotten what it is – and going through the DVD in fast forward didn’t help jog my memory).

The movie closes in an open-ended way, which immediately puts into question the “The Last Kiss” tag. Peculiarly, writer-director Ron Oliver (who also wrote ‘Hello Mary Lou: Prom Night II’) wouldn’t return in any capacity for the final entry in this series, ‘Prom Night IV: Deliver Us from Evil’. Instead he moved on to a very successful directing career.

I didn’t hate ‘Prom Night III: The Last Kiss’, but I’ve seen far better and it feels generic in many ways. It would have worked if it had benefited from sharper writing (the previous ones seem like genius in comparison), a better production (this is a low-budget movie… by Canadian standards!) and a more capable cast (no money obviously means no cast).

Alas, this is a make-do motion picture. One can only enjoy it for what it does okay, versus what it could have done better.