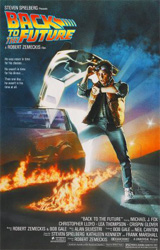 Synopsis: “You Built A Time Machine… Out Of A DeLorean?” – Marty McFly

A few films help to define my pre-teen years: ‘Airplane!’, ‘Back to the Future’, ‘Ghostbusters’, ‘Police Academy’ and ‘Splash’ are all motion pictures that I recall seeing seven times each in short succession. This was back in the day when one could spend a whole Saturday afternoon at the cinema by staying put until the next showing. My friends and I did that. Often.

Obviously, due to their ratings, I only saw ‘Airplane!’ and ‘Police Academy’ on home video. But I didn’t have a VCR, so when we rented one I would binge on the few films we’d get. Thus, I saw those two a whopping seven times each over the course of one weekend. This also happened for a few other films, but they didn’t have nearly the same impact as these ones did.

Of all of them, I think that the one that still resonates with me the most is ‘Back to the Future’.

While ‘Airplane!’ gets the most laughs, I see its flaws too clearly now, as an adult. ‘Ghostbusters’ is a brilliant film, but it doesn’t have the emotional impact of ‘BTTF’. As for the others, they’re guilty pleasures at best. But ‘Back to the Future’, it seems, is potent ad infinitum.

Not only is it a nostalgic trip in time, having so many memories attached to it now, but it remains the perfect example of cinematic alchemy: that elusive mix of elements that makes a film magical. It could easily have been spoiled by changing just one ingredient, and it’s the kind of recipe that filmmakers can never map out – it always comes together out of sheer luck and with little hope of replicating it.

What contributes tremendously is the fact that the cast has chemistry, a quality that only shows up on rare occasions. Even though not all of the actors are 100% terrific, I can’t fathom changing most of them because they appear to be elemental:

-Michael J Fox is fantastic in this and, despite his extremely popular role in ‘Family Ties’, this is his career-defining moment: he managed to play self-doubt mixed with naïve self-assurance, self-absorption with empathy; he gave us a flawed and yet heroic teenager that many could relate to in some capacity.

With all due respect to Eric Stoltz, who is a fine actor, I can’t begin to imagine him in the lead, when Fox so beautifully inhabits the character.

-Christopher Lloyd was basically born to play the role of Doc Brown; I’ve seen him in a number of roles and he’s never been better – his next closest being his secondary role in ‘One Flew Over a Cuckoo’s Nest’. While he was the second choice for Doc, it’s a good thing that John Lithgow became unavailable: Lloyd’s brand of cookiness was perfectly suited for the slightly demented scientist.

-Lea Thomson isn’t always credible as the alcoholic mom, but she is so sweet and disarming in her teenager role that you want to hand over your heart to her.

Damn… I had such a deep crush on her as a kid, it was CRAZY. So, obviously, to me, no one else can replace her. Even though I really liked her in ‘Casual Sex?’ and ‘Some Kind of Wonderful’, no role would ever be as memorable as her ‘BTTF’ one for me.

-I’ve only seen Crispin Glover in a few films, and the only starring role I’ve seen him in is here. He is so perfectly quirky, so ideal for the role; the intricate way he injects George McFly full of neuroses and yet retains a likeability that makes you root for him is absolutely brilliant.

Glover is so completely immersed in the character that no one could ever replace him either.

-Thomas F Wilson plays a good Biff. He plays him a bit stuffy, but he’s decent enough at playing the three versions of the character. And he’s easy to dislike, which is a key component of the character. Still, I suppose that he could have been traded in for another actor and it might not have made much of a difference. Maybe.

-Jennifer, as played by Claudia Wells, was fawn-like, delicate and beautiful. Very little acting skill is demonstrated here, and yet, when replaced by Elizabeth Shue for the two sequels, the character is just not the same, not as endearing. I really can’t explain that one, ’cause you can’t get more cookie-cutter than this.

I like how the filmmakers focused on character development in ‘Back to the Future’, making them integral to the plot, set up all the key elements and provided thrills along the way to maintain momentum. It’s such an amazing combination.

And yet, today, if they were to remake it (there are always rumours to that effect!) they would throw the balance by making it faster and adding more action.

…ruining it, basically. (not that they would have as cohesive as cast, but we all know that someone would still attempt a cash grab if they could.

The film, now dated 25 years, still holds up extremely well from a visual effects standpoint. I was actually surprised by the number of them that still made me go “whoah!” (case-in-point, the moment the DeLorean first hits 88 mph

). While it’s not essential to the story, which stands proudly on its own, it would have been horrible for the awe to be dropped by unsightly SFX. With very few exceptions (5-10% of them, and which were quite minor), I found everything just perfect.

Similarly, the music is not only timeless (unlike so many of its contemporaries, which are dated by cheesy synths and/or rock guitars and/or limp arrangements

), but it actually improves the film – further proving that music can be a key component of a motion picture. The rousing, exciting score to ‘BTTF’ truly gives it a lift, and the more subtle bits bring magic to the proceedings. As for the Huey Lewis tracks or the rock and roll numbers, they fit right in contextually.

It’s funny how the film’s score brings to it a sense of adventure, even though the only adventure is in time, not really in space – because, when you think about it, the characters move in a very small area in that town. And yet we get this impression that we’ve been on a bigger journey than this.

Having said that, ‘BTTF’ doesn’t miss a beat and flows exceptionally well, so this probably contributes to the overall feeling – by greasing the wheels a bit. I mean, even the way that they toyed with the effects of time-travel and how one might change the future was inspired and easily digestible – no small feat.

Frankly, I was along for the ride the whole way through, despite having seen this countless times (really, I should probably be jaded by now!

‘Back to the Future’ is a terrific blend of action, sci-fi, romance, comedy and drama. Granted, there are a few moments that defy credulity slightly (why does Doc have an experiment to set all his clocks at the same time? Why does he have an extra radiation suit for Marty? How does Marty get into a new school overnight with no questions asked, …etc), but, on the whole, it’s quite a tight piece and it defies all but the most intense scrutiny.

For me, ‘Back to the Future’ is a whole heck of a lot of fun. It’s got laughs, excitement, heart and a human touch. It’s an awesome ride and I can’t wait to go back to it. In time.

Post scriptum: after watching it, I would normally have given it an 8.75 – thinking it’s not quite a 9.0, but it’s superior to an 8.5. But then I considered the fact that I saw the darned film more often than most of the others and, thus, am probably slightly numbed at this point. So I gave it a 9.0. Which it damn right deserves.

Hmmm… then again, there’s the nostalgia factor that might be playing tricks on me. Doh!

2 responses to “Back to the Future” 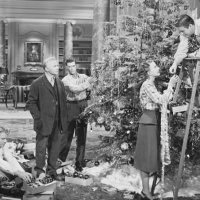 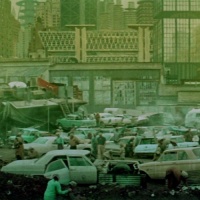