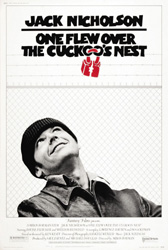 Synopsis: When free-spirited petty crook Randy P. McMurphy (Jack Nicholson) arrives at the state mental hospital, his contagious sense of disorder jolts the routine. He’s on one side of a brewing war, soft-spoken, coolly monstrous Nurse Ratched (Louise Fletcher) on the other. At stake is the fate of every patient on the ward.

eyelights: its colourful cast of characters. its phenomenal performances. its idiosyncratic touches.
eyesores: its length.

Sometimes we get trapped in a prison of our own making.

We may not always realize it, but we follow patterns, put structures in place that give us tunnel vision or block our ability to break away from the path we’re on. Sometimes we even believe that it’s inevitable, that we’re powerless to change our destiny.

Most of the time, that power lies within.

In ‘One Flew Over the Cuckoo’s Nest’, we’re introduced to a group of men who are interned in a psychiatric facility. Set in the early ’60s, it finds most of them willing subjects trying to overcome their various fears, insecurities and behavioural issues.

Unable to cope with the outside world, they’ve found refuge inside these white walls.

McMurphy is a troublemaker who’s trying to avoid incarceration by pretending to be insane; he’s been sent to the psychiatric facility for assessment. The moment he arrives, he challenges the status quo and bends the rules, inspiring the other patients.

…and straining the patience of Nurse Ratched, the ice queen in charge of their ward.

Though it’s based on the acclaimed and controversial novel by Ken Kesey, ‘One Flew Over the Cuckoo’s Nest’ isn’t so much plot-based, as it’s character-based; it’s far more interested in observing the patients’ behaviours and developing their arcs.

In the book, the story is told from Chief Bromden’s perspective, as he silently watches McMurphy make his mark. But Miloš Forman’s adaptation instead picks the interloper as our protagonist; the Chief is merely a side-character in this iteration.

McMurphy is played by Jack Nicholson, in a turn that landed him his first Academy Award (and second Golden Globe). His McMurphy is a quick-witted and mischievous character who observes everyone intently, discerning ways for him to profit from their weaknesses.

He’s a scam artist who’s only out for himself. But, as he stays with these damaged and broken men, he starts to empathize with many of them, befriending a few and eventually sacrificing his self-interest for their benefit – ultimately to his detriment.

It begins with teaching them how to play poker, then by organising basketball games in the courtyard, then by taking them out for a clandestine fishing expedition and, finally, by sneaking in some girls and booze for a Christmas party before breaking out.

McMurphy may be a threat to the order of the ward, but his rebellious nature allows the others to realize that their mental health doesn’t depend on isolation and banality – in fact, bringing a little spirit and adventure is to the benefit of most of them.

The book was published in 1962, at a time when institutionalization was being reconsidered, when it was being argued that patients could be better healed by integrating them more in society at large. The picture illustrates this notion quite effectively.

Its strongest argument is when McMurphy tries to explain to his new-found friends that they may be neurotic, but that they’re no worse off than most people: “You’re no crazier than the average asshole out walkin’ around on the streets and that’s it”.

Too true: sure, some of them have serious behavioural issues but, on the whole, they’re mostly maladjusted.

Though all of the characters are intriguing in each their own unique ways, the three that take prominence are the Chief, who McMurphy discovers is also wily, Billy, whom he pities and wants to help, and Nurse Ratched, who challenges his every move.

Chief Bromden is incarnated by Will Sampson, a large American Indian who towers silently behind everyone, not engaging anybody directly. Though not much is asked of him, Sampson gives the Chief a quiet dignity and vulnerability that render him remarkable.

Billy is played by Brad Dourif. Wide-eyed and fragile, Dourif makes the young man sympathetic even though he’s clearly troubled. His ability to stammer out Billy’s speech and to affect poses that display his overwhelming insecurity is a wonder to behold.

Louise Fletcher gave Nurse Ratched the self-assurance and emotional distance needed to make the character eerily controlling; though she never emotes in any great fashion, we can clearly see the intent and willpower in her eyes. It’s a brilliant turn.

Both she and Dourif won awards for these star-making turns.

A lot of the performances are in the editing, though: what’s amazing is how Forman cuts to various other characters in mid-action just to get a glance at them, to see their reactions. It’s a little like watching a National Geographics documentary.

Given the caliber of these character actors, we always get something meaty – even if their reaction shots are taken out of context. I mean, we’re talking about a movie that features Danny DeVito and Christopher Lloyd in some of their earliest roles.

But the two performances that really stick with me the most are when McMurphy is given electroshock therapy and when he lunges at Nurse Ratched at the end. The violence in these actions feels and looks so real that it’s a wonder how much acting there was.

The whole picture is an incredible journey. ‘One Flew Over the Cuckoo’s Nest’ is one of my all-time favourite films. Ever since I first saw it on VHS in the early ’90s, it’s remained in my top 10, if not top 5; it’s a picture that moves and entertains me.

The cast and their characters are a huge factor; the deft way that they play off of each other is something that impresses me each time that I watch this picture. The group therapy sequences alone are perfect examples of an ensemble cast at its sharpest.

For me, part of the appeal is its perspective on mental health; it reminds me how easy it is for people to slip in and out of that dark place. Resilient though we may be, we’re such fragile creatures; we can all fall down the rabbit hole, to lose ourselves.

But it’s also easy to judge others due to their idiosyncracies; what may seem insane to one person may merely be coping strategy, and what may seem sane may very well only be a facade. There’s no user’s manual to life, to being human; we mostly muddle through.

And, sometimes, the things that save us also trap us.

McMurphy was trapped by his opportunism and inability to take responsibility for his actions. The other patients were trapped by the sense of security that they felt in the ward. None of them were able to see beyond these strategies until they met each other.

In the end, as I watched the Chief disappear over the hills, all I could think was that, though McMurphy paid a heavy price, his boldness and carefree attitude inspired in his friend the courage to face the outside world, to escape his self-imposed prison.

There’d be no looking back.

He was finally free.