Synopsis: Everybody’s favorite bedtime story, “Goodnight Moon” comes to life on DVD for the very first time. Along with other beloved animated tales and lullabies, children and stars come together in a delightful exploration of the nighttime world. Children offer wise and witty reflections on a host of sleepytime topics, from the comfort of “blankies” to Native American dreamcatchers, from monsters and nightmares to the mysteries of dreamland. Susan Sarandon narrates “Goodnight Moon,” Tony Bennett sings the swing classic “Hit the Road to Dreamland,” Lauryn Hill lends a new rhythm to the rhyme “Hush, Little Baby,” the many voices of Billy Crystal bring “There’s a Nightmare in My Closet” to animated life, Natalie Cole tells the tale of Faith Ringgold’s “Tar Beach,” Aaron Neville sings “Brahms Lullaby” and Patti LaBelle performs “Twinkle, Twinkle, Little Star.”

Goodnight Moon and Other Sleepytime Tales 8.0

eyelights: the overall quality of the programme.
eyesores: the poor animation.

‘Goodnight Moon and Other Sleepytime Tales’ is a half-hour programme that was produced in 1999 for HBO. It’s essentially a collection of bedtime stories read or sung by celebrities interspersed with short bits of children talking about all things pertaining to sleeping.

The kids were all dynamic and adorable as they discussed dreaming of meeting The Beatles, romantic fantasies, not being able to control dreams, the purpose of dreams, what happens when we don’t have them, and what dreaming is like for blind people.

Naturally, they also go into nightmares and being afraid of the dark, talking about confronting fears. There’s a boy who talks about his “blankie” and a girl discusses what a lullaby is. There’s also a bunch of kids in native dress discussing what dreamcatchers are.

Even though it’s all intended for children of (at most) six years of age, I thought that it was well-presented: the discussions were brief enough to be understood with ease and the participants were relatable; I was surprised by how comfortable they all were on camera.

As I mentioned, a large chunk of the programme consists of readings of bedtime stories, including “Goodnight Moon”, read by Susan Sarandon, “Tar Beach”, with Natalie Cole and Billy Crystal doing “There’s a Nightmare in my Closet” – which was why I watched this, having just read it.

The readings are unsurprisingly good, but the animation is -to be polite- rudimentary, looking more like art from the books animated in post-production. I was unfamiliar with the others, but “There’s a Nightmare…” changed the art, swapping the rifle with a sword with a cork on it.

It’s all done to more rudimentary animation – all pertaining to sleep, naturellement (ex: animations of animals going to sleep, or a girl sleeping on a cloud and chasing a star in the sky). It’s probably the strongest part of the programme – at least for younger audiences

The finale has the kids talking about “Goodnight Moon” and saying goodnight to various characters in the story as its being reread by Sarandon. It’s a fitting end to a lovely kids’ show such as this one. I would certainly recommend it to parents who have young ones at home.

It makes for a terrific pre-bedtime programme. 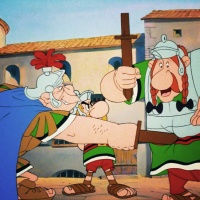