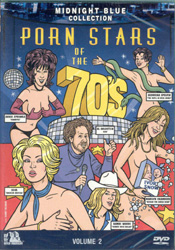 And naturally, it is tied together by a few sleazy ads from the era.

Interviews
Marilyn Chambers: Dated April 20, 1977, here she discusses all her post-porn activity (she had only made two films and was attempting to go mainstream): a play she did in Vegas for 52 weeks, how she got the key to the city from its mayor, she wrote books, …etc. Eventually, though, the interviewer asks about her sexuality. But it doesn’t faze her: she remains composed, lovely, charming and fresh.

Georgina Spelvin: With Al Goldstein, she talks about being 36 when she got started. She sounds mature and really together; she intrigued me. We also get to see her tapdance and do a routine taken from one of her movies (consisting of writhing about with a snake) at a local strip joint.

Jennifer Welles: Also with Goldstein, they discuss the fact that she was 45 at the height of her popularity. They also show clips of ‘Honey Pie’, presumably her latest effort. She’s polite and friendly, but she seems quite unimpressed at the end, for some reason. Did Goldstein say something off-putting off camera (it wouldn’t surprise me, quite frankly)?

Bambi Woods: Unrecognizable with her short brown hair, she and Steve Kraus talk about the production of ‘Debbie Does Dallas’. Funny how she only talks about that one movie, ignoring the sequel completely. At the time of this interview, she was “dancing” in a club, so we get to watch her routine for a little bit. It’s nothing to writhe (!) home about.

Seka: With Al Goldstein on March 17, 1980, she talks about how she got into the business, the various Plato’s Retreat joints, her sexuality, and her relationship with John Holmes. Amusingly, Goldstein mispronounces her name each time he says it. Eventually, we get to watch her routine at the strip club, complete with letting men kiss and grope her. Um… seriously?

Miscellaneous
Nude Disco Dancing: Marilyn Chambers and Tommy Bush do a lengthy nude disco routine in a dance studio. Seriously. Thankfully, it’s there’s a cheeky text commentary from the DVD’s producers about the ’70s and drugs to complement it; this certainly helped make the show enjoyable.

Marilyn Chambers takes a sexy bath: In black and white. Woohoo. Then, in colour, she dances naked in a living room.

Midnight Blue Goes to the Movies – A Closer Look: Marc Steven and Helen Madigan talk about the reasons why they left the business, about the downside of the job. They both talk rather candidly about the stigma, the lack of money involved, the work conditions. Wow… they must have burned some bridges with this.

Tara Alexander’s world record: A 1975 plug for Tara Alexander’s record-setting, Midnight Blue-sponsored, event in which she had sex with 88 men in one night at a Plato’s Retreat location. What’s notable about this is not only that they are trying to get the general public to apply for the gig, but she’s rubbing her pussy the whole duration of the plug. Wow… on TV?

Advertisement highlights
The adverts were the usual array of ads for grungy, unenticing-looking spas (then again, everything in the ’70s looking like cheap and grungy), films and magazines. But there was far less sleaze than in the last collection. There were, in fact, a few intriguing ones:

It was interesting to see that all of the strip joint routines were done in the same club. And, despite the fact that they were shot at different times, perhaps with a few years’ difference, it always looked the same. Clearly, Midnight Blue had connections with that club.

On a technical level, although it felt far less scuzzy than the last one did, this DVD was mired by lots of tape hiss and whine. I guess these tapes weren’t preserved in vaults, huh? Anyway, the (optional) text commentary throughout made up for the DVD’s less palatable aspects.

If the rest of the set is anything like this one, it could be enjoyable.