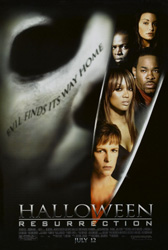 Synopsis: Original Halloween star Jamie Lee Curtis (Halloween: H2O, True Lies) is back and joined by Busta Rhymes (Shaft and Tyra Banks (Coyote Ugly) in the terrifying Halloween: Resurrection the latest in this electrifying horror film series! The reality programmers at DangerTainment (Rhymes, Banks) have selected Rudy (Sean Patrick Thomas- Save the Last Dance), Bill (Thomas Ian Nicholas- American Pie 1 & 2) and a group of thrill seeking teenagers to spend one fun filled night in the childhood home of serial killer Michael Meyers But the planned live broadcast turns deadly when their evening of excitement becomes a night of horror as Michael himself decides to crash the party!

After ‘Halloween H20‘, which appeared to complete the Laurie Strode and Michael Myers story arc (again), the studio wanted to make another movie without Michael Myers in it. Aware of the pitfalls of making such a move, given the failure of ‘Halloween III‘, the producers refused and made yet another sequel.

Following where ‘H20’ left off, ‘Halloween: Resurrection’ (which was original titled ‘Halloween: The Homecoming’) takes us three years after the former’s events to find Laurie Strode in an institution, in a catatonic state; apparently Michael had switched with a paramedic he killed so Laurie beheaded the wrong person.

But we soon discover that Laurie has been faking her condition, not taking her medication, and has been patiently waiting for Michael to come for her. Naturally, this 17-minute opening sequence leads to his return and a duel to the death between the siblings, showing the resiliency and fallibility of both.

It’s an exciting sequence but it’s not entirely satisfying, as it leaves one with many questions: Why was Laurie faking it for so long? Wouldn’t she be safer on the run than in the hospital? Why had Michael disappeared for three years, instead of going after her while he had the chance? And where was he all this time?

Oh, and why doesn’t anyone in the hospital notice his violent arrival? Seriously. The guy crashes through her locked door and chases her to the roof, but no one hears or notices anything. It’s just not credible enough for the audience to be fully immersed. And when you’re not immersed, you can’t be thrilled or scared.

And then there’s the rest of the movie.

The rest of ‘Halloween: Resurrection’ (or ‘H8’, as we’ll refer to it hereon in) is a completely different beast. It’s a horror film that happens to have Michael Myers in it, but it has very little in common with the rest of the series, being more pop culture savvy and closer in tone to horror films of the day.

This ‘Halloween’ finds a group of six college students winning a competition to be on an internet series called Dangertainment, which would have them locked in the abandoned Myers house for a night in order to explore it and reveal its mysteries. Naturally, Michael will not take kindly to this intrusion.

If anything, ‘H8’ is an attempt to comment and/or satirize our exhibitionistic and voyeuristic culture – particularly in the aftermath of (so-called) reality TV and social media. It shows some of the participants being eager for the instant fame this would bring, as their every movement is recorded via headcam.

It also finds the lead, Sara, befriended by a high schooler who goes by the moniker of Deckard. While she doesn’t know his true identity (as in real life!), he will prove a tremendous help to her later in the picture, given that he’s watching the show so he can see everything in the house and text her with clues, advice… and warnings.

From that perspective, ‘H8’ is interesting. It’s not brilliant, but I enjoyed seeing this reflection of our modern age. And if it makes the film cheesy, then I believe that it’s merely because we have built a society that doesn’t reflect well – perhaps on the inside, looking out, it seems more normal than it should.

I really enjoyed its take on the whole reality TV genre, as well, with the whole Myers house set up in advance to provide the optimal amount of chills and the organisers even interfering to scare the participants. It’s not far removed from what takes place in these shows, something that not all viewers care to admit.

What’s great about it, though, is that it not only makes the characters unaware of what’s real and what’s not, but it does the same to the audience. Given that there’s not a lot of scares left in Michael after seven films, especially in a contrived setting like this, this was a good way to slip a few scares in.

Unfortunately, ‘H8’ also comes loaded with the traditional cheap scares throughout. Thankfully, there are no cats bursting in, but there are plenty of other gimmicks used to get a jump out of the audience. Sadly, the score played into that a few times too many for my taste. I much prefer an atmospheric score.

But I nonetheless enjoyed the soundfield of ‘H8’. The score was more rooted in John Carpenter’s original (despite its many departures) than recent offerings, and the picture also boasted the best surround action of the whole series, with creaks, …etc., floating about the room right from the opening shots.

I also enjoyed the visual aspect of the picture, which had regular film for much of it, but also some of the gritty, low-resolution internet camera footage intercut to give us a bird’s eye-view of the proceedings. We are watching the film as audience and as participants, and we’re also watching the watchers.

Where ‘H8’ trips up most is with its characters, which are equally bland, leaving us withno one to root for – not even our reticent protagonist, Sara. The only star power comes from Busta Rhymes and Tyra Banks as the Dangertainment producers, both non-actors who ham their way through from start to finish.

And this leads me to Busta Rhymes, who has an amazing rap voice, but isn’t exactly an award-winning thespian. Despite that, he not only gets the first on-screen credit, but his “bad-@$$” self gets to go head-to-head with against Michael (and holds his own, I must add) with a few sweeping martial art moves.

In a ‘Halloween’ film.

Sigh… You’d almost think this was made in the ’80s. You’d half-expect ninjas to pop out.

Beyond the characters, there are a few inexplicable aspects to the film which bear mention, like the fact that Busta’s character claims that Michael’s been living under the Myers house for twenty years. And then there’s the fact that Michael stalks the house the whole time and no one ever sees him.

Just how big is this house, anyway?

Well, let’s face it: ‘Halloween: Resurrection’ was never going to be a masterpiece: it’s a gimmick film (it even had four different endings, but director Rick Rosenthal was unable to convince the studio to release them in separate cinemas). So we can simply forget about holding it up to the same kind of scrutiny.

‘Halloween: Resurrection’ is designed for cheap thrills and laughs and should only be viewed with that in mind; it’s the type of thing you switch your brain off to watch. Unsurprisingly, it was panned by critics and is shot down by many fans – but somehow still managed to make a decent profit at the box office.

Which meant another film in the franchise. But this time, it would be a complete reboot, not a sequel.

And that “resurrection” proved equally controversial.