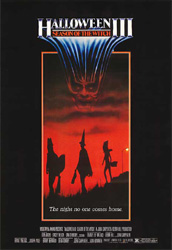 When a terrified toy salesman is mysteriously attacked and brought to the hospital, babbling and clutching the year’s most popular Halloween costume, an eerie pumpkin mask, doctor Daniel Challis is thrust into a terrifying Halloween nightmare. Working with the salesman’s daughter, Ellie, Daniel traces the mask to the Silver Shamrock Novelties company and its founder, Conal Cochran.

Halloween III: Season of the Witch 5.5

“Yes kids, you too can own one of the big Halloween three. That’s right, THREE horrific masks to chose from. They’re fun, they’re frightening, and they GLOW in the dark.”

‘Halloween III’ is the bastard child of the ‘Halloween’ franchise. It doesn’t follow ‘Halloween II‘, nor does it precede ‘ Halloween 4: The Return of Michael Myers’. Actually, I has absolutely nothing to do with the Michael Myers story and nothing to do with any of the other films in the series – aside from showing the original playing on the telly in the background, that is (first the ad, and then some short clips, complete with the iconic ‘Halloween’ theme).

As with ‘Halloween’, they also opened this film’s credits with a pumpkin – but a computer rendition of one. And you can imagine what early ’80s computer graphics were like: “horrid” doesn’t even do it justice.  This credit sequence also served as a connecting visual to a key element of ‘Halloween III’: the grating Silver Shamrock ad, which played repeatedly. Its strobing effect, combined with that annoying Commodore Vic 20-like soundbyte, made me want to get my pumpkin-carving tools and go on a bloody, pulpy rampage.

Anyway, the whole idea behind ‘Halloween III’ was to create an anthology series out of the ‘Halloween‘ franchise. Producers John Carpenter and Debra Hill were loathe to continue the story of Michael Myers and wanted to have fresh stories each time, in a ‘Tales From the Crypt’ or ‘Twilight Zone’ vein. This strategy failed miserably. While the movie made its money back, its box office success was veritably eclipsed by the previous two instalments. Furthermore, it got raked over hot coals by critics and the public alike – not just for its many inconsistencies, but for changing the channel entirely.

“What’s the matter? Don’t you have any Halloween spirit?”

I went into ‘Halloween III’ knowing full well what to expect. I had seen it at least twice before. I had even read the pocketbook adaptation when I was a teenager (before actually seeing the movie, truth be told). So I knew full well that it had its hokey bits and that it was somewhat forgettable. Or, at least, that I would like to forget it – even if I couldn’t.

‘Halloween III’ is a pretty average horror film from that era: low-budget, ill-conceived, and cheap-looking. It tries to scare its audience by showing it a string of grisly deaths, but it doesn’t spend much time on the foreplay – or even on creating a proper mood. Instead, it jumps right into the action from the onset, dry humping your leg half-heartedly. I’ve had more fun pushing away the neighbour’s frisky dog.

The only thing that creates any atmosphere at all is the score by John Carpenter and Alan Howarth. A few years ago, I bought the limited edition CD from Alan Howard himself (he answered his own business line that morning!), based on the strength of his ‘Halloween II’ score and was quite impressed with what I heard – it was much more nuanced than the first two films were. And it had some genuinely eerie moments in it. I played it a lot.

Aside from this, however, ‘Halloween III’ is mostly devoid of spookiness. The only other chill-inducing element is the small horde of henchmen who appear everywhere, defending the interests of Silver Shamrock. They always come in numbers, and often move as a collective. They also never seem to communicate amongst themselves. It’s disquieting and creepy because it feels so calculated and inhuman.

In some ways they reminded me of the pod people in ‘Invasion of the Body Snatchers’ – which is likely the inspiration, given as there is a part of the plot that revolves around the substitution of humanity by drones. Plus which both pictures are set in the fictional town of Santa Mira. And the finale of ‘Halloween III’ echoes the final frames of that 1956 sci-fi horror classic (more on that later).

Even the many murders in this films aren’t especially scary. Some of them are creepy, certainly. Some of them are gross, absolutely. But the sequences are often not set up to build any form of nervous anticipation. In fact, we often don’t know exactly what’s going to happen – we only know it’s likely going to be an unpleasant experience for the character involved. So the eventual kills end up being more shocking than anything else.

In that sense ‘Halloween III’ might press the buttons of a certain type of audience: the crushing of a head, a laser blast in the mouth (in a sequence that fails on all counts except in the nastiness department), and even the buggy results of the mask demonstration on that kid are all vicious enough to give some people nightmares. If they buy into the unrealistic effects, that is (the blown-off face, in particular, looks impressively ghastly… yet fake as anything).

But, if the picture has any major problems, it’s with the script.

It starts off smoothly enough, with an ominous tone created by a chase and the victim’s subsequent death. It was actually half-decent: there was a tenacious, stalker-like vibe to the predators that suggested no good. Then the mystery behind that death begins unfolding, slowly, while a little character development took place. It’s always good to pace yourself, ease people into it.

Then, after having to contend with corny characters like the John Candy-like goofy business tycoon on a special trip to place an order and the annoying hairdresser-type business woman who prefers placing her orders in person than by mail (but strangely enough, doesn’t consider using the phone), and the simple-minded silliness of the robots comes to the fore, everything unravels.

‘Halloween III: Season of the Witch’ ends with Dr. Challis shouting “Stop it!” into the phone repeatedly, eventually cocking his head enough that he’s shouting it at the audience. Fudge me, man. Perhaps this was meant to evoke that classic ending from the original ‘Invasion of the Body Snatchers’, but it was nothing less than abrasive.