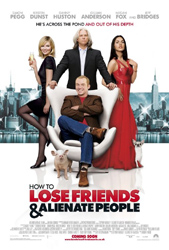 Synopsis: Simon Pegg (Hot Fuzz, Shaun of the Dead) stars as Sidney Young, a gate-crashing British journalist who loves exposing the shallowness of the celebrity world, yet desperately wants to join it. When he accepts an offer from renowned editor Clayton Harding (Jeff Bridges) to write for an ultra-chic magazine in Manhattan, Sidney finally gets to rub elbows with A-list celebrities… but always manages to rub them the wrong way. His fellow writer, Alison Olsen (Kirsten Dunst), is powerless to stop Sidney when he sets his lustful sites on beautiful starlet Sophie Maes (Megan Fox). But when Sophie’s publicist (Gillian Anderson) makes him a tempting offer, Sidney is finally poised to conquer the Big Apple… or suffer the biggest humiliation of his life.
***********************************************************************

How to Lose Friends and Alienate People 8.0

I like Simon Pegg. I liked his ‘Shaun of the Dead’, and ‘Hot Fuzz’, so any movie with him in it immediately intrigues me. Give it a name like ‘How to Lose Friends and Alienate People’ and I’m doubly curious – it makes me wonder if someone’s made a biographical film of my life and hasn’t paid me any royalties.

So I decided to give this little film a try.

And it was worth it: watching Pegg play and ambitious schlep, making his way into the world of celebrity journalism, was fun both from anti-establishment point of view and from a cynic’s perspective on the age of celebrity. It’s not entirely predictable, thankfully, and it plays a little like ‘The Secret of my Success’ – only less ‘80s , and a bit more realistic. Could be worse, really.

I should give a nod to Jeff Bridges. He is too cool. He’ll never match the level of carefree coolness that he displayed in ‘The Big Lebowski’ ever again, but he added to the film in tremendous ways. In fact, the box art should have a label along the lines of “Now with 23% more Jeff Bridges coolness!!!”

I should also give a headbutt to Meagan Fox. She is a non-actress. Sure, she’s sort of cute (albeit not enough to justify all the press!), but she displayed absolutely no talent whatsoever. Not even charm. Or charisma. Or sex appeal. Maybe she needs to be cast with robots for her to seem comparatively delightful. Ick.

Anyway, it was an enjoyable film. It didn’t leave with stars in my eyes, but it’s definitely worth a look. Or two. Maybe even a purchase.