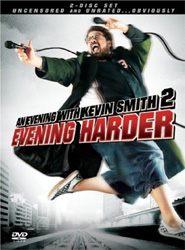 Synopsis: The Clerks guy is back, telling tall tales and basically being a big, fat, pop culture geek. Join the cult film icon and director of Zack and Miri Make a Porno as he celebrates his 37th birthday in a hilarious, profusely sweaty, take-no-prisoners performance in front of a packed hometown crowd! You’ll be gasping for air as Smith colorfully details the behind-the-scenes on Live Free or Die Hard and Clerks II, provides far too much information on the mating rituals of his dogs, and paints a painfully funny picture of the Jury Duty from Hemorrhoid Hell! A Threevening With Kevin Smith means 3x the raunch, 3x the hilarity, and 3x the charm of the film world’s favorite potty-mouthed raconteur.
***********************************************************************

Sold Out: A Threevening With Kevin Smith 7.0

I know that it’s been a long time since I posted. It’s very uncustomary, but I’ve been busy as heck an all I watched were special features and alternate versions of films I’ve already commented on here.

For one, I was wrapping up the whole sci-fi binge that I had been on for the last 6 months, and I finished off (as you may discern) the whole Kevin Smith series I had started in early-August. It was fun.

The “Evening With Kevin Smith” series is a set of spoken-word engagements that he’s been doing over the years. It’s vastly entertaining, if you’re into very crude humour and unflinching reflections about life. They are all exceptionally long (at least a whopping 3h30m each!!!), though, so it takes up a lot of time.

But it can be worth it.

Personally, I found the second volume better than the third (but not better than the first!) because of the second DVD. The first DVD was a show in Toronto and it was only okay. But the second, in London, was pretty awesome – and it totally compensated.

As for the third volume… well, it’s still entertaining – as they all are. The problem is that it’s not nearly as funny; the laughs are spread further apart due to Smith lengthy diatribes (one story can last a good 40 mins! No joke!). But it’s still interesting to hear him and the special features -90mins of out-takes- are funny as heck and are worth the effort (even after sweating out the frist 4 hours!).

So do check in for my daily spookshow. It should be a frightfully grand time.