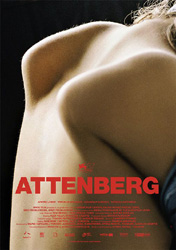 Synopsis: Greece’s Official Entry for the Academy Awards®, ATTENBERG is a wonderfully deadpan, surprisingly touching coming-of-age story. 23-year-old Marina lives in a small, factory town by the sea where she passes her time watching Sir David Attenborough’s nature programs, listening to the proto-punk songs of Suicide, goofing with her only friend Bella, and tending to her ailing father. When a visiting engineer comes to town, the two form a tentative relationship that pushes Marina into contact with the strange and complex world of adulthood. Critically acclaimed, ATTENBERG is a sincere and humorous look at life’s defining moments.

eyelights: its unusual coming-of-age story. its pace. its cinematography. its quirky bits.
eyesores: its gratuitousness.

‘Attenberg’ is a 2010 Greek drama set in a seaside industrial town about a 23-year-old young woman coping with her father’s illness. Marina’s days consist of driving him to and from medical appointments, hanging out with him and her friend Bella.

Marina doesn’t understand human attraction and sexuality; she may even be asexual. She relates to the David Attenborough wildlife videos she watches far more than to the people around her. So she asks Bella to teach her what she knows about sex.

The picture finds Marina on a dual journey of grief and self-discovery – as her father inches closer to death, she inches her way closer to sexual awareness. It’s an awkward period for her, but it’s a road that leads her to a greater internal peace.

I was quite taken with ‘Attenberg’ – more than anticipated. Though it’s a very slow-moving, tranquil film, it perfectly encapsulates Marina’s state of being – reserved and slightly offbeat. Because, if it’s anything, ‘Attenberg’ is certainly self-consciously offbeat.

Case-in-point the opener, which finds Marina reaching for Bella with her tongue, as Bella teaches her to French kiss. It’s a medium shot, the two uncomfortably distant from one another, mouths joining for awkward acrobatics in front of a white wall.

It’s such a strange way to open a movie, but it was intended to get a reaction out of the audience; clearly, no one would ever French kiss this way. And the choice of a static shot makes the moment even more in-your-face and alien. Two aliens kissing.

Then the two young aliens break to play on the grass below, pretending to be animals – which is the behaviour that Marina can best emulate. She play-acts not only with Bella, she does this with Spyros, her father, as well, acting out on their bed.

With Bella, Marina also choreographs these rather unusual walks up and down pathways in the housing projects where they live: donning traditional housewives dresses, they slowly make their way arm-in-arm while discussing various aspects of sex.

And sometimes, they dance. Or sort of dance, as they fling their limbs about in wide gestures.

The performances are all excellent, though admittedly they usually aren’t especially animated. But they make sense contextually, with Marina’s detachment being entirely appropriate given her cerebral father and Bella’s dispassionate presence.

‘Attenberg’ also captures Marina’s inner life with its visuals: the ordered, uniform structures that make up the small town are as bland as her daily existence but as strange as she feels. And yet these long static shots are as fascinating as she is.

The mechanical business of this industrial town is its only activity. It sometimes breaks the stillness, though it feels as though these moving machines are like worker ants existing on a slightly separate plane from the seemingly dehumanized town.

There is no other human presence in Marina’s life. Even when she goes to the hospital with her father, there are no other patients, no orderlies, no doctors; it’s just the two of them. The only sign of life is at Bella’s work – and it’s all in the background.

There is hope for Marina, however.

One day, as Marina waits by her car, a man calls down to her from his balcony. Intrigued, she goes up to visit him. It’s an awkward encounter but she uses this opportunity to explore her sexuality, gradually pushing her limits over a few visits.

Though it’s not love, this connection reaches Marina in a way that no other relationship outside her father’s and Bella’s had. In that sense it’s meaningful, because it opens up a gateway to another side of her humanity, one she was unaware of.

I really enjoyed ‘Attenberg’. A coming-of-age story revolving around a young adult is a rare find, so it was an unusual piece from that perspective. Add in the slightly alien feel of its characters and environment and it was certainly intriguing.