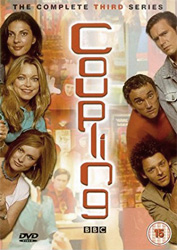 At the end of Coupling’s outrageous second season, Steve and Susan have split up; Jeff and Julia are living in a state of perpetual arousal; Jane is a man-eater in sincere search of love; Sally gets more neurotic and self-obsessed each day; and Patrick… well, what can one say of Mr. Tripod, the love beast? How can their lives possibly get crazier? Find out in the third season of this hilarious, critically acclaimed U.K. comedy sensation!

eyelights: the sharper humour. Jeff’s demented views of the world.
eyesores: its many contrivances and forced humour. Julia’s absence. the softening of Sally’s character.

Series 3 of ‘Coupling’ continues where the last one left off, having set up a separation for Steve and Susan, and a new relationship for Jeff and Julia. It’s a shorter slate than Series 2, reducing the total number of episodes from 9 (the show’s peak) to 7. It also gives Jeff even more screentime than in the past.

Episode 1: Following-up on the Series 2 finale, Steve and Susan have a row and she leaves. Then the screen splits in two with a tear, and we are shown how each is coping separately: She fantasizes that he’ll change and beg to get back with her, while he dreams that she gets a lesbian lover instead of him. Later, Sally shows Susan some books to read and give to Steve. Meanwhile, he’s playing video games with his buds, thinking of calling her; both Jeff and Patrick tell stories revolving sex and phones. Jane joins Susan and Sally, and they go to the beauty parlour. Steve, Patrick and Jeff go to the strip joint. Then the picture goes PiP and both end up at Steve’s place, but an hour apart. It’s pretty good timing, overall and I liked the gimmick. However, having just watched Series 2, I was annoyed that Steve’s hair is completely different here, given that it’s a direct follow-up. 7.75

Episode 2: At their respective workplaces, both Jeff and Jane meet a colleague in the storeroom and say “hi”. There are discussions between both groups of friends of the meaning of “hi”, how it varies contextually. Jeff is worried about telling Julia about the encounter, especially since he’s had an incident with that colleague before – an embarrassing photocopier incident. Jane also has had a past incident with her guy – and both are hilarious. Then it gets awkward as they set up dates, ending on a cliffhanger. Jeff’s become too contrived for my taste, but otherwise it’s a funny episode. 7.75

Episode 3: In a follow-up to the last episode, Jeff’s at a bar with Wilma, the colleague he had the encounter in the stockroom with. She makes her desire and intentions quite clear and he scrambles to manage the situation – with the help of his friends, who are listening through his cell phone and giving him tips via his earpiece. It could have been good, but Jeff’s really stupid here and the cellphone gimmick is moronic – as if that she wouldn’t notice. Anyway, it all turns into ‘Three’s Company’-like awkward contrivances, ending with Julia going to Jeff’s place to crash while he’s hosting. Of course. It’s cringe-worthy stuff: all of it would easily be resolved if Jeff was straightforward instead of being a douche. Richard Coyle’s performance as Jeff is good, as is Emilia Fox as Wilma, but the material sucks. 3.5

Episode 4: It’s 3AM, and Sally calls Patrick over to take care of a spider – but it’s just a dream. Later, he interrupts her in bed with a bloke well below her grade; there are tons of questions about his attraction to her and vice versa. We discover, in a piece of revisionism, that they’d met years ago at Susan’s office party – which we see it from both of their perspectives. Ultimately, they decide that it’s not meant to be and awkwardly decide to hang out less in the future to make it easier on themselves. It’s not an especially funny episode, but the dynamic is realistic enough. 7.5

Episode 5: Jeff and Julia are still passionate. Steve and Susan no longer feel any passion. Jane is dating a born again virgin. Sally and Patrick are defending their non-friendship. Then, in a panic, Jeff runs into the bar wearing a bondage headgear: Julia is tied to her bed and he can’t untie her. It’s hilarious, though utterly ridiculous, but it devolves when her parents show up and she gets him to answer the door anyway. Then it totally spirals downward from there. Too bad, because there are good laughs along the way. For some strange reason, they changed the opening and closing credits format mid-season. Weird. 6.75

Episode 6: Steve comes home to find that Susan’s redecorated the bathroom and removed the lock on the door. Then everyone discovers that Patrick has a girlfriend; naturally, Sally’s anxious about it. They’re all invited to Susan’s for dinner, but Patrick, to defuse the situation with Sally, told Jennifer, his new girlfriend, that Sally’s a lesbian. Well, it so happens that Jennifer is bi – obviously, there’ll be confusion and embarrassment. Then, later, at dinner, Steve gets into a huge spiel about the difference between men and women with regards to the use and decorating of the bathroom. You can see what they were going for here, but it doesn’t quite work. 7.0

Episode 7: Sally comes in asking the others if they’ll take a pregnancy test with her so that she be can 100% sure what a negative result is – they would be her control group (um… I thought these tests were designed to be self-explanatory). Anyway, the episode started poorly. And, naturally, Sally mixes the tests and one of them is blue. Then Susan tells them about her and Steve trying to have a baby; they even got potency tests done for Steve and we discover that Susan’s sterile. Or is she? This one is a cliffhanger episode. Meanwhile, Sally and Patrick hook up. Again, you can see what the intention was. But it doesn’t come together quite right. 7.0

Interestingly, though Series 3 is the most inconsistent (not the worst, just most inconsistent) of the lot, it was nominated for and won the award for “Best TV Comedy” at the British Comedy Awards.  It’s hard to know if it was due to the show’s growing popularity, or if the competition was weak that year, but it seems undeserved.

Though ‘Couplings’ hinged far more on Jeff than in earlier years, Richard Coyle would not return to ‘Coupling’ for Series 4 – something about not wanting to be pigeonholed by such a colourful and popular character. But, given how stupidly the character was written at times, it was probably time to say goodbye.

Jeff was great as a side-character, but not as a co-star.