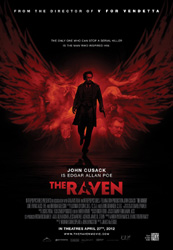 Synopsis: The only one who can stop a serial killer is the man who inspired him.

John Cusack and Luke Evans star in this blood-curdling tale of terror that’s as dark and haunting as the legendary master of the macabre who inspired it – Edgar Allan Poe. Baltimore, 1849. While investigating a horrific double murder, police detective Emmett Fields (Evans) makes a startling discovery: the killer’s methods mirror the twisted writings of Edgar Allan Poe (Cusack). Suspecting Poe at first, Fields ultimately enlists his help to stop future attacks. But in this deadly game of cat and mouse, the stakes are raised with each gruesome slaying as the pair races to catch a madman before he brings every one of Poe’s shocking stories to chilling life… and death.

eyelights: its core conceit. its visual style.
eyesores: its execution.

“I believe that God gave him a spark of genius and quenched it in misery.”

This year, for Edgar Allan Poe’s birthday, I decided to dig up all the Poe-related films that I have. I have many. So many, in fact that we’ll be doing a Poe film a week until the end of May, when we’ll move on to Vincent Price’s birthday. Since the two are somewhat interrelated, the next few months should prove an interesting journey.

The first entry in our Poe marathon is ‘The Raven’, the 2012 motion picture by the director of ‘V for Vendetta‘ and starring John Cusack as Edgar Allan Poe himself. The conceit is that the last few days of Poe’s short life are shrouded in mystery: he was found delirious, wearing another man’s clothes and ramblings about “Reynolds”.

And then died four days later.

No one knows what happened to him, but ‘The Raven’ tries to fill the gap: it invents a series of serial killings that are connected to Poe’s works and which lead the police to his door. A drunk, he can’t remember his whereabouts but, when his fiancé is kidnapped, he pairs up with the inspector to try to recover her and stop the killings.

First, there was Sherlock Holmes, Action Hero.
Then, there was Abraham Lincoln, Vampire Hunter.
Now, there is Edgar Allan Poe, Super Sleuth.

The picture, which is more entertaining than most reviews suggest, is hilarious in the way that it treats fact and fiction. I know very little about Poe, though I’ve read some of his works in high school and have all of his oeuvre on my shelf, but it’s clear that the filmmakers took some serious liberties here – at the very least with his death.

But the whole picture doesn’t hold up: If Poe’s final days are a mystery, then there’s no way that he’d been one of the lead investigators on a serial killing case that made headlines – headlines that he wrote, in this version reality. Everyone would have known that he was involved and his final days would have been documented.

The killings themselves are also ridiculous – fun, if you’re a fan of Poe, because they’re all inspired by his fiction, but they’re just not realistic. There’s no way that the killer installed a spring-loaded window in a sealed room to make his escape without anyone noticing beforehand. And there’s no way he could have built the pendulum.

Yes, that pendulum: a massive mechanism that takes up a whole basement.

There’s also no way that he could have buried Emily, Poe’s beloved, under the floorboards where he did. He couldn’t have snuck her in, couldn’t have torn the building apart and then hidden his travails without anyone noticing. It probably would have taken days to prep and execute this devilish plan. It’s simply not possible whatsoever.

And let’s get to the kidnapping, too, while we’re at it. It’s a bit unclear how that happened: one moment Emily is with Poe, and then she’s disappeared – in a crowded room filled with police officers. And how in the world was she able to escape the casket by scratching and then PUNCHING HER WAY THROUGH? Um… Emily, MMA Fighter?

Anyway, Emily doesn’t exist. In Poe’s life, there was no Emily Hamilton; in his final days Poe was with his childhood sweetheart. The closest person to this character is Sarah Helen Whitman, who Poe courted but couldn’t marry because of her mom’s interference. Here it’s the dad, and Emily isn’t a poet – though she loves Poe’s poetry.

So why watch ‘The Raven’, which takes its name from the Poe poem, but which has no relevance here? Because it’s a hoot to watch John Cusack transform Poe into a moody sleuth. Because the killings have a Grand Gignol quality to them that make of them a twisted delight. Because the picture is well-paced and zips by like a breeze.

Personally, my favourite moments are the quirkier aspects that the filmmakers introduced, like the notion that Poe would have a pet raccoon, who he talked to. Or the idea that he’d lead poetry readings with rooms full of young women from high society – but would be broke and drunk. Or that Poe would move in with the inspector.

It’s as though ‘The Raven’ was setting up a buddy-cop movie with Edgar Allan Poe as Martin Riggs and Inspector Fields as Roger Murtaugh.

But it sure would have been fun to see that.

In any event, I doubt that the makers of ‘The Raven’ put much thought into it. If anything, in this picture, Poe was just a novelty to be exploited. I mean, it’s been done before, with the Roger Corman/Vincent Price films, so it’s not a complete outrage – the precedent was set long ago. Something craftier would’ve been nice, though.

Sadly, this wasn’t popular enough to create a string of similar pictures revolving around Poe. It would have been terrific to see a Poe revival of sorts, even if the pictures weren’t at all faithful to the source material or historically accurate. Poe certainly deserves more recognition – though he’d likely want to be respected as well.

‘The Raven’ feeds on his cadaver but basically flips him the bird.

Happy birthday, Mr. Poe. Let’s hope that you’re not turning in your grave.