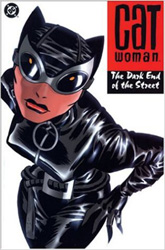 Summary: For years, Selina Kyle has prowled the skyline of Gotham City as its most famous thief, Catwoman. But when word spreads of Catwoman’s demise, Selina decides to leave the costumed world behind and continue her trade cloaked in the shadows. Unable to enjoy her newfound anonymity for too long though, Selina decides that she must return to her infamous persona. Donning a new costume and attitude, Catwoman returns to the streets and sets her sights on the serial killer that has been preying upon the streetwalkers she calls friends.

Catwoman: The Dark End of the Street, by Ed Brubaker, Darwyn Cooke and Mike Allred 7.75

In what appears to be an add-on short story culled from Detective Comics, the book begins with a four-part set featuring Slam Bradley, a hard-nosed private eye – in which, for reasons unknown, he’s hired by the Mayor to track down Catwoman, whose death is starting to come into question.

His investigations lead him on the path of Selina Kyle, a former candidate for mayor who died tragically mid-campaign. Could this new Catwoman be her sister Maggie? Our weathered detective follows a trail that leads him through the underworld, to Bruce Wayne and eventually to Selina Kyle.

But their encounter lands him in more hot water than he’d ever imagined.

It’s a short set that amounts to perhaps the equivalent of one normal comic book, but it’s rather satisfying in its own way; I rather enjoyed watching Slam put the pieces together and liked that we were privy to his train of thought all along. Ultimately, it’s to the point but doesn’t feel especially contrived.

The book proper consists of a four-part ‘Catwoman’ mini-series and begins with Selina Kyle doing some soul-searching to sort out her life, even going to a therapist that Batman has recommended. It’s a natural continuation of the Slam Bradley shorts in that her motivations remain the same.

She eventually decides to go back onto the streets and takes on the task of tracking down a serial killer who has been murdering local hookers; having apparently been a sex worker herself (or so it’s suggested), she wants to ensure that her own are protected. And so she dons a new, more modern suit.

And hits the pavement.

There’s an interesting moment of reflection that she’s possibly the only person for the job because the cops don’t consider sex workers human and even take advantage of them, while Batman has a black and white morality, so he feels that they found themselves in their predicament for a reason.

She, on the other hand, has a more gray view of the world.

Needless to say, she eventually tracks down the killer, who is a shapeshifter with no recollection of his past aside for having been a soldier and being subjected to all sorts of atrocious tests. He’s a little out of her league, but she finds a short-term solution to the problem. And then contacts Batman.

I rather enjoyed this set because there was enough character development to make it interesting and just enough action to make it exciting. Brubaker did an excellent job of balancing the two and of shoe-horning them in a very limiting four-volume format; it’s not overly ambitious nor is it remotely mundane.

There were two parts that satisfied me slightly less, and it was when Selina gets her friend Holly, a former hooker, to seduce a car salesman so that she can lead him into the office – where Catwoman was waiting. It felt gratuitous because Catwoman could simply have been waiting without Holly’s help.

So why put her at risk?

(Answer: to add a little sex to the book, obviously)

I also found the ending a bit facile, with Catwoman just jumping around while the shapeshifter chased her around. What were Brubaker’s notes to Cooke, “Fight between Catwoman and shapeshifter for X number of pages”? It just seemed like this part took over the book with no real reason to.

Then again, I guess action is expected for a finale.

The art was okay. While I’m a fan of Darwyn Cooke’s phenomenal work on the ‘Parker‘ books and ‘Justice League: The New Frontier‘, it’s not nearly as good here. Having said this, it’s a collaboration with Mike Allred, so clearly it wasn’t exactly a labour of love for Cooke in the same way that was with the other two books.

All in all, though, Brubaker and company put together a set of really solid Catwoman books. It reads really well and it helped to make a character that I find merely okay, actually interesting. As far as I’m concerned, this more multilayered approach to superhero comics should be used as a blueprint.

There’s more to superheroes than just action and epic escapades.

Although that’s good too.