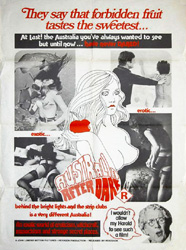 Synopsis: Five years before he turned the world on with his schoolgirl sexploitation classic FELICITY, producer/director John Lamond made his indelible debut with this mondo -style look at the depraved underbelly of a land down-under. It s an ultra-sleazy, full-frontal journey through the weird and the pathetic, the ugly, the obscene and the beautiful, featuring strippers, swingers, murderers, devil worshippers, nutty gurus, drunken aborigines, and much more.

‘Australia After Dark’ is a feature-length documentary by John Lamond (of ‘Felicity’ and ‘The ABC of Love and Sex: Australia Style‘ fame). It was purposely designed to emulate ‘Mondo Cane’, the popular exploitation travelogue, but with an Australian flavour.

Assuming that it would be easy to pastiche a bunch of semi-unrelated scenes together, Lamond decided to give it a try. He felt that all he needed to do was to shoot short segments and alternate the tone regularly so that it would entertain a diverse audience.

It was a massive hit, and it started his career.

The 88-minute picture (which was only recently released uncut for the first time in the United States) begins with a narrated introduction explaining what kind of weird, dark, unusual and beautiful things that we’ll see. It has a subtly ominous tone to it.

Featuring a tongue-in-cheek narration, here is some of what the picture has in store for its audience:

Ultimately this collection of 37 segments doesn’t deal exclusively with sex, but there’s quite a lot of it, nonetheless. Interestingly, although it’s exploitative, it’s surprisingly progressive for its time. I mean, there really wasn’t much judgment in it.

So I rather enjoyed ‘Australia After Dark’. I mean, it’s not super entertaining, but as a snapshot of a moment in time it’s rather effective. Whether or not it would be of any interest to people not already keen on Ozploitation cinema is another matter, however.