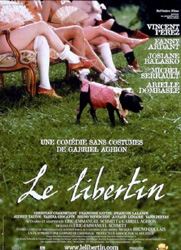 Synopsis: France, late 18th Century. The State and the Church have forbidden the publication of Diderot’s encyclopaedia. As he struggles with the “Morality” chapter of the illicit book, Diderot juggles his mistresses and his daughter’s libertarian tendencies.

eyelights: its basic premise. its setting. its dialogues. its liberal doses of sexiness.
eyesores: its anachronistic score. its broad performances. its cheap gags.

“You have perverted sin!”

‘Le Libertin’ is a sex comedy set in the French countryside, at the tail end of the 18th century. It revolves around the publication of the second edition of philosopher Denis Diderot’s “Encyclopédie”, France’s first encyclopedia. The controversial oeuvre, which had been banned by the Church and French authorities, had sent Diderot in hiding, determined to bring knowledge to the masses.

I honestly have no idea how historically accurate the film is. Frankly, I knew nothing of Diderot when I bought the DVD, some 15 years ago; I was drawn to the promise of a sexy farce and the casting of Vincent Pérez, who had been the gorgeous but dim Christian in ‘Cyrano de Bergerac‘. But I suspect that it’s not at all factual, given that it was disowned by Éric-Emmanuel Schmitt, the original play’s author.

But that’s not important. It wouldn’t be the first time that a historical figure has been reworked, if not embellished, in fiction. Anyway, ‘Le Libertin’ is hardly intended to be a docu-drama: it’s intended to be a saucy 90-minute romp and nothing more. Heck, it doesn’t even bother with proper costumes or make-up, and even introduces an anachronistic dance-inspired score instead of proper period music.

It’s no grand cinema, but it’s always held a small place in my heart. When I first saw it, I had seen nothing like it before: it was a sex farce, yes, but it was French, it was set in the 18th century, and, for its time, it pushed the envelope. So I forgave it many of its faults, including the corny gags, the weak direction and the mildly camp performances. We all have our guilty pleasures, I suppose.

Perhaps it won points with me early on, given that our first sight of our protagonist finds him under the skirts of his hostess, Baronness d’Holbach’s, cousin. I wish. It’s soon established that she frequently lets her husband’s lesbian cousin do the honours, which already adds a little piquant to the proceedings – but even more so now that Diderot competes for the title of the best cunnilinguist.

And so ‘Le Libertin’ carries on, serving up one tasty morsel after the next to spice up the proceedings, which chiefly consist of Diderot trying to write his final essay on morality – with a deadline looming, his host’s brother, the Cardinal, attempting to unearth Diderot’s printing press (which is hidden in the bowels of the large mansion’s Chapel) and the arrival of a sexy painter he longs to seduce.

But, beyond the many outside forces hindering his progress, Diderot’s essay is scuttled by his own uncertainty – for, every time he writes a piece that he’s satisfied with, his conclusions are challenged by one of the other characters, forcing him to start over from scratch. This leads his chief assistant, who has been tasked with distracting the Cardinal, to despair as they trash the fruits of their labour.

One of the things that makes this film enjoyable is its dialogues, including the ones in which Diderot and company discuss various aspects of morality, like a woman’s sexual rights and abortion. While I wouldn’t say that they are sharp, at least the exchanges are thought-provoking and layered with some wit. That is, when they aren’t making crass sex jokes – which I also found quite funny in many instances.

Naturally, my brain fogs up a little bit at the thought of watching ‘Le Libertin’ because there is healthy helping of nudity, both male and female. In fact, while there are a lot of bare breasts to be seen (including a young Audrey Tautou… yum!) the scales are balanced by a lengthy scene in which Diderot chases his wife through a fountain and the massive property… buck naked. Yes, ladies, full-frontal.

And in front of everyone! (It must have taken much courage from Vincent Pérez to get through those days of shooting!)

So, ultimately, I’m not sure how biased I am about ‘Le Libertin’. I didn’t like it quite as much as I’d had in the past, but I have seen it quite a number of times now. Would I recommend it? Yes, with reservations. Lord knows I used to enjoy it a lot at the time, and no doubt I’m not the only one. But also know that this is a sex farce and that it’s all meant in good fun; in no way expect something deeply satisfying.

Liberal doses of cheap thrills and laughs is what you’ll get.