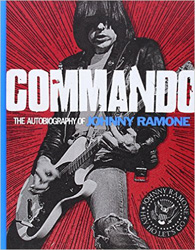 Summary: Raised in Queens, New York, Johnny Ramone founded one of the most influential rock bands of all time, but he never strayed from his blue-collar roots and attitude. He was truly imbued with the angry-young-man spirit that would characterize his persona both on and off stage. Through it all, Johnny kept the band focused and moving forward, ultimately securing their place in music history by inventing punk rock. The Ramones were inducted into the Rock and Roll Hall of Fame in 2002—two years later, Johnny died of cancer, having outlived two other founding members. Revealing, inspiring, and told on his own terms, this highly designed memoir also features Johnny’s assessment of the Ramones’ albums; a number of eccentric Top Ten lists; rare historical artifacts; and scores of personal and professional photos, many of which have never before been published.

“I was bad, every minute of the day. I was the terror of the neighborhood, like a a really bad Fonzie.”

‘Commando’ is the autobiography of Johnny Ramone, as edited by John Cafiero, director of the fly-on-the-wall documentary ‘Ramones: Raw‘. Incredibly, although it is culled from Johnny’s writings, the book was only published in 2012, some eight years after his untimely death of prostate cancer.

The book is an easy read, rendered in large lettering and in a simple but precise language – exactly what you’d expect from Johnny, the succinct control freak. Between its unvarnished heavy-duty cardboard covers are tons of archival pictures from his own collection. It looks very punk rock.

But it has style.

I rather enjoyed reading ‘Commando’.  It was not only breezy, but it was entertaining too: Right from the start, in his intro, Johnny started off by making a list of people he punched in the head or knocked about – just to illustrate how angry he was all the time. It was nearly comical, absurd as that was.

And then he cut through the ridiculousness to address just how significant a role his anger played, how it fueled him in his endeavours and how it painted an image (which he self-consciously sustained in public) for himself and the group. One gets the impression that, without it, he’d’ve gone nowhere.

He added that he’s aware that his demeanour makes people uncomfortable, even though that’s not his intention. He seems to just accept it as matter of fact. He also added that he missed the anger after he retired, saying that the prostate cancer battle made him soft – and he really disliked that.

This links to his candid admission that he was a teenage hoodlum for a couple of years after high school, getting arrested, doing drugs (including hard ones), mugging and/or assaulting people, robbery, vandalism (like spontaneously throwing stones through windows, just because the impulse took him).

He would even take disused television sets that he found on the curb, go up the top of apartment buildings and toss them down to scare passers-by. He freely admits that he was simply not a good person, but he explains (not justifies) that he was frustrated and hadn’t quite figured out what he wanted out of life.

The most dramatic part of all this is that he claims to have stopped at the age of 20 after hearing a voice telling him to shape up. Not knowing whose voice it was, he then immediately got his life completely in order – he never got drunk again (although he smoked pot regularly, apparently). Wow.

It’s quite obvious that he needed to be in control (at the very least of himself) and had a bit of an OCD streak, what with his various collections: tix stubs, baseball cards, movie posters, …etc. He even kept a journal of all the concerts and movies he went to, documenting all of that in his “black book”.

Some people need that sense of stability and structure that such hobbies and self-discipline provide; he had the best work ethic, was never late for an appointment, only called in sick when absolutely needed, …etc. In that sense, I think he and I would have understood each other quite perfectly.

I started to realized, as I read this book, just how much I relate to Johnny – even though he’s far rougher around the edges than I could ever be (for example, I am and forever will be straight-edge. I also have never been violent – although I can totally relate to his constant anger and grouchiness).

It made me think that perhaps that’s why I like the Ramones so much: I can relate to Johnny’s self-discipline and demeanour, Joey’s insecurities and neuroses and Dee Dee/CJ’s immaturity and self-destructiveness. I mean, you connect with the artists too – even if it’s subconscious.

It made it all the more fascinating to me that Johnny claims to have molded their image with the help of original drummer and producer Tommy Ramone, taking months to fine-tune it. This includes their stage presence and delivery, which they streamlined to give it a more efficient and professional look.

They also wanted to have an image that the kids could relate to and that was instantly recognizable, so they created a sort of “uniform” with the jeans, running shoes, and leather jackets – this wasn’t even the way they dressed at first. Finally, they changed their last names to Ramone for cohesion.

The changing of their names had an extra value: whenever each of them spoke to someone it would be instant publicity for the band, seeing as their names would be immediately associated to the band. In other words, the Ramones were early adopters of branding. And they did a fantastic job of it.

Although most of the book is about his life in the Ramones, there are personal touches along the way, too, including childhood memories, his politics and love of sports. He also talked about his relationship and twenty-year marriage to the love of his life, Linda – which lasted all the way to his final days.

Speaking of which, at the end, he addressed his lengthy battle with prostate cancer as candidly as possible – but without ever going into dreary details (not that he’s prone to verbosity!). In the process we learned just how private he was and the toll it was taking on him. He got a smidge emotional about it.

The book is epilogued by Lisa Marie Presley, one of his close friends, who defines him as a grouch, even though she clearly loves him dearly. It leads one to realize that, despite his hard exterior, Johnny was good to the people around him. He wasn’t easy to be around, but he was devoted, loyal and unshakeable.

As his epitaph so nicely puts it: “If a man can tell if he’s been successful in his life by having great friends, then I have been very successful.”

The book is completed by a couple of appendices, one which features Johnny’s assessment of the Ramones’ albums, each rated and discussed individually, a series of quirky top ten lists that he compiled through the years, as well as a short collection of pictures of Johnny with his celebrity friends.

In the end, ‘Commando’ is not just an autobiography, it’s a loving tribute. It’s a must-have for any fan of the Ramones.