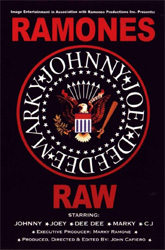 Synopsis: Hey, Ho, Let’s Go! Climb in the van, buckle your seat belt and hang out tight because you’re about to experience life on the road with the founding fathers of punk rock, the Ramones! The band that started it all stars in this all-encompassing video scrapbook containing OVER 5 HOURS OF RARE MATERIAL spanning the Ramones’ history-making career (circa 1979-1996), most of which is seen here exclusively for the first time anywhere!

eyelights: R-A-M-O-N-E-S. its bird’s eye view perspective.
eyesores: the randomness of the footage. its insubstantial quality.

‘Ramones: Raw’ is a 2004 home video release that mostly consists of home video footage by Marky Ramone with a few concert bits and some oddities interspersed in between. It goes back as far as 1980 and takes viewers all the way to the last few years of the band, including their induction to the Rock and Roll Hall of Fame.

It’s short on candid interview material with the band members, but it provides as close to a bird’s eye view of the band as fans are ever likely to get: it follows them around on tour, behind the scenes and provides a candid look at the personalities and dynamics behind the Ramones – especially later in their career.

Joey is shy, reserved, awkward – an unusual thing for a frontman. Johnny is a no-nonsense, confident, straight guy; he’s the band’s engine. Dee Dee is slightly goofy, and childish – a strange dichotomy with his addictions. Marky is the goofball, always saying corny stuff. CJ is teenager-like, akin to a clean Jason Mewes.

Johnny and Marky are always slagging each other. Amusingly, Marky keeps referring to Johnny as the sloth – which seems so out of character given how much work Johnny’s put into the band, and how the band kept touring incessantly. They also poke fun at their sex appeal, about the lack of girls that are on tour with them.

It’s amazing to see how adored they were in South America: there were crowds, mobs, everywhere. In one instance, their van was literally swarmed as they left their hotel; the band sounds panicked. The footage is backed by music from and an insert of ‘NOTLD‘, when the cemetery zombie tries to get into the car – a nice touch.

Further cementing their appeal, there is backstage footage of them with celebrities who have come to see them, including Drew Barrymore, Al Lewis, Carly Simon, Debbie Harry and even Lemmy – who wrote and recorded the tribute song “R.A.M.O.N.E.S.” with Motörhead (and which the Ramones later cheekily covered as a bonus track).

Let’s face it, the Ramones weren’t a technically proficient band, but they did influence a lot of people just by being naively innovative. The Sex Pistols wouldn’t have existed without them, for instance. And there’s no denying that they were spitfires: look at how quickly Johnny and Marky played! Few could keep up with them!

In fact, that’s one of the most amazing things to watch in the handful of live performance bits that are scattered across the film: these guys are insane to watch. In fact, it can be exhausting. I for one can only listen to or watch them perform for short bursts. So the way they were presented here was perfect for me.

Honestly, as much of a fan as I am, I can’t imagine how I’ll get through their 2DVD ‘It’s Alive’ set.

There are tons of fun bits throughout, too, like the crappy claymation video for “Touring” (a total rip off of “Rock and Roll High School”, b-t-w), a hilarious fake TV ad for a volleyball match between the Ramones and two centerfolds and Gilbert Godfrey’s bit as Gilbert Ramone, the “fifth Ramone” who had such terrific ideas for the band.

It made you wonder just how much the band was in on the joke at times, though. Were they laughing with, or being laughed at? Or were they simply taking any damned publicity and/or gigs they could? How else does one explain their appearance on the kids’ show ‘Steampipe Alley’ in 1988? Who was their public there?

And let’s not forget the publicity that Dee Dee’s foray into rap created, with everyone poking fun at the poor schlep’s attempt at breaking away from the Ramones. Let’s face it, the video for “Funky Guy” is truly dreadful. ‘Raw’ at least treats the significance of his departure with some dignity, cutting small bits about it together.

In any case, no matter what the general public thought of these “freaks”, the Ramones were clearly loved by some of us. Adored, even. After all, how else can one explain their Grammy Lifetime Achievement Award, or the fact that a street near the CBGB’s club (which they helped put on the map) was renamed Joey Ramone Place after his death?

As many already know, I’m a devotee of the Ramones. Even though I don’t listen to them every day, I have all of their albums and continue to pick up any new material that comes my way. And I’m not alone: for all their strangeness, they managed to connect with untold numbers of people. And it’s for these people that ‘Raw’ was put together.

What’s amazing is how well-edited the montage is. Even though it jumps back and forth through time, has no narrative and seems to have no sense of direction, it flows extremely well. At least, I thought so. However, I suspect that non-fans would find all these behind-the-scenes shenanigans and their goofing off mundane.

Fans will delight in the fact that the DVD is also stocked with TONS of bonus material. For starters, there’s an audio commentary with Johnny and Marky (with director John Cafiero as mediator). It’s not especially insightful, but it’s kind of nice because it has the intimate quality of the Ramones showing you their home movies.

There are also 18 minutes’ worth of outtakes/deleted scenes of the band on tour, soundchecks, visiting, meeting with fans, …etc., that can be watched individually or all at once. The most notable of the lot is their induction in the Rock and Roll Hall of fame in 2002, and introduced by Eddie Vedder.

Then there are a bunch of TV appearances, which are all relatively short but are all amusing in their own right:

Space Ghost Coast to Coast: This is from their ‘Acid Eaters’ era and they were on the show to promote the album. Space Ghost asks them to improvise some songs, which Marky promptly does. At the end of the segment, they can be found eating Space Ghost’s birthday cake and wearing party hats. But he’s not invited. 7.75

The Howard Stern Summer Show: This mostly consists of a skit featuring Joey and Marky playing golf with “President George Bush”. He gives them pointers and then decides to commission them to write a song to enbolden the troops in Iraq. He also consistently calls them by any other name but their own. This ends with a small interview with Stern on his show. 7.5

The Uncle Floyd Show
The Ramones were frequent guests in the early days of this jokey variety show – which was a vehicle for Floyd Vivino, who would line up a bunch of corny things to say. There was a montage of many of their appearances during ‘Raw’, but they include a few full clips here.

Clip 1: À la Tops of the Pops, this is a simulated live performance of “I Just Wanna Have Something to Do”, after which Uncle Floyd (dressed as a country-western artist) jokes that they’re a great country band and proceeds to strum a few chords himself. 7.5

Clip 2: For a different appearance, the band introduced a clip from ‘Rock n Roll High School’, the glorious finale of “Do You Wanna Dance”, which was shown in its entirety. 7.5

Clip 3: This is a short interview segment from yet another show, in which Uncle Floyd asks each band member his influences and, at the end, asks the band for their advice to new musicians. It’s not especially funny or clever. 7.0

USA Up All Night

Gilbert Godfrey did these little spots during the commercial breaks for USA Up All Night (which is where the 5th Ramone skit from the main programme was culled from). These ones were during a screening of ‘A Nightmare On Elm Street’, of all things. Must have been during their “Mondo Bizarro’ days.

Clip 1: For this one, Godfrey, who wears a Ramones shirt and carries a small cup, plays the part of the monkey assistant to an accordionist. He’s complaining about getting mugged and talks about being the 5th Ramone, with inserts of he and the band driving around on top of a bus. 7.0

Clip 2: Same setting, and this time he talks about his time fishing with the Ramones, and it includes clips of them goofing off near the docks, fishing, skipping rocks, …etc. 7.5

MTV’s 120 Mins: This is a very brief interview with Joey about ‘Adios Amigos’, talking about the break-up. The interviewer is lame, not sounding prepared at all. 6.5

There’s also ‘I Ramone’, a full 27-minute programme that was recorded in Rome in 1980 for and broadcast on Radiotelevisione italiana and made available here for the first time. It shows the Ramones blitz through a blistering set of 12 songs, the first of which is at a soundcheck, hours before the nighttime outdoor concert.

What’s amusing about this programme is the short interview entirely overdubbed in Italian and the song titles that were posted as the band played: “Rock Way Beach”, “Shock Treatment”, “Sheena is Punk” and “Here Today, Gowe Tomorrow”. “Blitzkrieg Bop” was called “I Can’t Make it on Time” while the latter was called “I Wanted Everything”.

Although it got lost in translation, ‘I Ramone’ remains a terrifically fast and furious performance, showing the Ramones in top form throughout. Of note is that some of the footage was reused for ‘Raw’ (which explains the ‘Raw’ badge in the bottom of the screen, serving to mask the Radiotelevisione italiana logo).

And, if that isn’t possibly enough, there are a dozen Easter Eggs hidden across the disc, each highlighted by a numbered Ramones logo which has been adapted so that the eagle is breaking out of an egg. They’re extremely brief bits that weren’t even fit for the Deleted Scenes section of the DVD, but which might be amusing to fans.

For instructions on how to find these hidden “gems”, please consult the following site: http://www.hiddendvdeastereggs.com/films/33231.html

(Please note that two of the instructions are incorrect: The third one, for “Deleted Scenes” should say “left”, not “right”, and the fifth one, for the “Ramone Fishing” clip, should say “right”, not “left”.)

Look, ‘Ramones: Raw’ is not for everyone: the casual fan or the merely curious will likely not want to wade through over three hours of ramshackle material featuring the band members in one fashion or another. ‘Raw’ is for die-hard fans, those who simply can’t get enough; this DVD will surely satisfy their curiosity and their hunger to some degree.

To them I whole-heartedly say “Hey, Ho! Let’s go!”