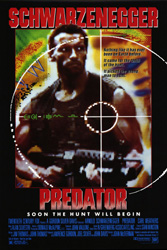 Synopsis: Arnold Schwarzenegger stars in this action-packed adventure story of fighting men pitted against an unseen enemy, a force more powerful than their fiercest weapons. Recruited by the CIA to rescue hostages held by guerrilla fighters in a Central American country, Schwarzenegger and his men encounter an enemy unimaginably more deadly than any on Earth – because the Predator is not of this Earth.

John McTiernan’s 1987 motion picture ‘Predator’ is the story an elite team sent out to retrieve an important presidential cabinet minister in a dangerous jungle terrain, but who wind up being hunted by a lethal alien warrior. It was the second-biggest grossing motion picture of that year and it finally cemented Arnold Schwarzenegger’s name as box office gold, after a few auspicious starts that only led to weak fare. It also jump-started McTiernan’s career, who would then make ‘Die Hard’.

To think that it stemmed from a joke (that the only person Rocky hadn’t fought yet was E.T.), got developed and somehow got greenlit.

I was surprised to see how much I still enjoy this film. Although I didn’t see it at the time (so nostalgia isn’t at play here), I have seen it often enough, and it continues to entertain to this day – despite its overabundance of testosterone and minimal plot development. For good or bad, ‘Predator’ is pure action, and it’s done exceptionally well: it paces itself nicely and throws in just enough mystery to keep us latched on until it finally decides to go balls out.

It works in three key steps: It begins with the initial mission, which is set up with some amount of uncertainty and distrust. This consists of a two-part rescue mission: first to ascertain what went wrong, then to find and free their targets. The second part of the picture is similar to a slasher film, in that all the character are prey to a killer they aren’t yet aware of. The third part is the stand, which consists of booby-trapping the area and trying to outdo the hunter.

What makes it fascinating is that, unlike a slasher film, these characters are survivors. They are also trained experts at combat in the toughest conditions. They have worked as unit for a long time; they are a balanced crew that trust and depend on each other. Watching them work as a team is part of the picture’s beauty: much of it is spent seeing them elaborate various schemes to surmount their difficulties together, watching each other’s back. It made you want to root for them.

However, in a way, you’re also rooting for the villain of the piece, which has been established from the first scene as an alien who has landed on Earth at an undisclosed point in time. Let’s face it: the predator is a pretty cool creature. It looks creepy, it’s got an imposing stature, it has gadgets (ex: arm blades, shoulder laser cannon, cloaking device, thermal vision, ….etc.) and, based on its behaviour, how calculating it is, it’s clearly very intelligent. What’s not to like?

Even the effects for his cloaking device remain effective to this day; they’re simple but they do the job, making him look a bit like a blur, a hologram. The thing that works the least is the suit itself because the hands are clearly made of rubber: when it tries to use its first aid kit, you can see the fingers and nails bend in a way that’s just not possible. Thankfully, we don’t see much of this, and even its exposed face looks quite cool. It’s a pretty remarkable creation.

What’s interesting is that Jean-Claude Van Damme was initially slated to play the predator. The filmmakers thought that having someone who is agile and skilled as he is would give the creature a ninja-like quality. But he apparently kept complaining about the suit and not being credited on-screen for his part in the picture. There are differing reports about whether he was fired or quit. Either way, they recast the part and the hulking Kevin Peter Hall took his place.

In some ways it made sense to pick him instead: between Arnie, Carl Weathers, Jesse Ventura and Sonny Landham, the picture was filled with massive characters – having the hunter at least match its prey would seem logical. After all, when they are in the same shot together, it would look foolish for a lean, 5’10” actor to be fighting on the same terms as muscle-bound freaks who are all over six feet tall. Hall was a full foot taller than all of them – before even putting the costume on!

I really enjoy the mixture of characters here, even if they are two-dimensional. Although none of the actors are fantastic thespians (for all his on-screen charisma, Arnie was maybe the worst of the lot!), they played off of each other well enough. The most remarkable of them all was Landham, who plays a stoic native American tracker, the bedrock of the team: he was a little on the dry side, but he had heart. And you couldn’t help but have full confidence in this guy.

My next favourite is Arnie’s Dutch, who (naturally) is the team leader: he’s smart, efficient, and thinks about his crew first. By the film’s end, when the picture turns into Arnie vs Predator, as one might expect (although, to be fair, the original script had Arnie alone from the get-go and he asked for rewrites so that it would instead build up to that point), you’re completely on his side and, having seen what the alien can do, you wonder how he’s going to pull out of this one alive.

And there’s Carl Weathers, as George Dillon, an old military friend of Dutch’s who now works for the CIA and has hired them for this quick and dirty mission. Although he’s no great actor, I’ve always like his on-screen presence. I wish that he had had more success; why he couldn’t make the leap from Apollo Creed to Dillon to stardom is beyond me. And how is it that he wasn’t in ‘The Expendables‘, having worked with both Arnie and Sly before? Seems like a shoe-in to me.

Aside for the cast and alien, another unforgettable character in this picture is the setting: trapped in this jungle (the country was never mentioned, but the map shows an area of Brazil – although most of the picture was actually shot in Puerto Vallarta, Mexico), our protagonists are sloughing their way through unknown and dangerous territory – as evidenced by the scorpions that discreetly find their way onto their clothing. One would be hard-pressed to feel safe there.

I especially enjoyed how the sounds of the jungle filled the room on the surround system. I’ve heard a clearer, more notable soundtrack many times before, but there were things going on here and there – which is pretty good considering the film’s age. And when there were action sequences, it completely exploded into the soundspace: we were there with the team, being shot at. I can only imagine how good this would sound on blu-ray, with a lossless audio track – if remastered correctly.

All this to say, that ‘Predator’, despite having been diluted over the years with a crappy sequel and two underwhelming ‘Alien vs Predator’ pictures, retains its freshness to this day. It’s set in an unknown time and place, so it doesn’t show its age much. Add to it a confident cast, an enigmatic villain and sure-handed direction and it’s as good as action films get. It’s a gripping, primal, cat-and-mouse game that gradually builds up and doesn’t let go the moment you’re in its clutches.

“There’s something out there waiting for us, and it ain’t no man. We’re all gonna die.”