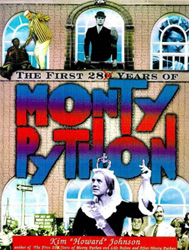 Summary: The ultimate guide for Python fans is back, newly revised for the nineties. The years since the publication of the first edition have brought a great deal of change for the Python alumni-most notably most celebrated postgraduate successes: A Fish Called Wanda, The Fisher King, 12 Monkeys, and Disney’s Mr. Toad’s Wild Ride.

When I took up the challenge of reading ‘The First 200 Years of Monty Python‘, many months ago, I was but a babe in the woods. I didn’t even know that Kim Johnson was a fan of Python turned a friend over the years. I had no idea that there were two editions of his book; I kept wondering why two copies kept coming in from the library, not noticing the subtle differences between them.

But ‘The First 280 Years of Monty Python’ is actually a very different book! It is ‘The First 200 Years of Monty Python’ new and improved! Same great taste, but half the calories! And now with 156 extra pages, to boot!!! It’s stocked with even more archival pictures from the Pythons’ collections. It’s basically the ‘Terminator 2: Judgment Day‘ to the predecessor’s ‘The Terminator‘.

What a difference 80 years make!

Well, as promised when I wrote up this book’s predecessor, I pore through ‘280 Years’ to see what distinguished it from the other. I literally sat with both books in hand and compared the two as I read along, noting where Johnson made his alterations so that you don’t have to. Thanks to my obsessiveness, you can decide which book to get without having to do the homework. Huzzah!

The group’s origins produced a story of Michael Palin being hired for ‘Now!’ with the producers hoping for a Brit version of Dick Clark. Ha! And then there’s Cleese’s experience of working on ‘The Magic Christian‘, which had major script issues and a megalomaniacal Peter Sellers cutting Ringo Starr out of scenes. Woah! There’s also a show I knew nothing about called ‘We Have Ways to Make You Laugh’ which got Gilliam started on animation. Fascinating!

Otherwise, their origin stories are recounted here, with Johnson going through the process by the which the Pythons wrote, performed and shot the shows – all very familiar stuff at this point, but it may not have been at the time of the book’s release in 1998.

Graham Chapman: It’s common knowledge that Chapman wasn’t exactly the heavy lifter when it came to writing, but that he always came up with the the transformative twist that made a sketch work and that we was the perfect sounding board for John Cleese. What was interesting was to find Cleese describe him as an embroiderer vs. an engine room person. Very appropriate.

There’s a lot more on ‘The Odd Job’, a film Chapman did and a huge section on ‘Yellowbeard’, taking us behind the scenes of the making of his pet project. There’s also a longer ending with information on ‘Jake’s Journey’, a show he was developing before his death. And then there’s Cleese’s eulogy, which is slightly different from the one making the rounds on Youtube. I wonder why…

John Cleese: This one is completely re-worked after one page in, with all of his Video Arts training material and commercial work detailed in full, as well as his solo acting work (which includes ‘Silverado’, ‘Privates on Parade‘ and ‘Clockwise‘, amongst others). All very interesting stuff, especially the less familiar material from Video Arts. A lot of time is spent on ‘A Fish Called Wanda‘, naturally, and a sizeable amount on ‘Fierce Creatures’ – the failure of which baffles all who talk about it.

Terry Gilliam: This chapter is interesting because the original one is the bones of it, with each section being fleshed out tremendously from how it used to be. In particular, Gilliam’s solo directorial work gets a larger treatment.

I especially liked reading about ‘Jabberwocky’ and was fascinated to find that they had considered pillaging from the set of ‘The Pink Panther Strikes Again‘, but that Blake Edwards had everything destroyed to prevent it; Gilliam merely wanted to save money and was going to redress everything but it wasn’t perceived that way.

I love the story of how Gilliam cast John Neville as Baron Munchausen: He wanted Neville, but he was too busy with his theatre work to do motion pictures. Gilliam happened to mention it in passing to a make-up artist who, unbeknownst to him, knew Neville. She made a call and he landed the actor. Ha.

I also loved reading his views on comedians, in particular Robin Williams, explaining how they use comedy as a defense mechanism and that Williams was especially vulnerable. Pretty insightful.

Eric Idle: There are some terrific stories about his experiences with George Harrison when they first met and collaborated on some songs, but the best are his experiences on ‘Saturday Night Live’, which he called good fun but utterly chaotic. With Python, they were used to working in a very methodical, disciplined way, but it was the complete opposite with ‘SNL’, which set the bar low. Inevitably, that left them satisfied with the end results because of this. But not him. His feelings about the show seem to echo my impression, that it’s quite over-rated and that it could be much better.

Terry Jones: This section is a bit dry, providing us with insight on his various projects since Python, but no anecdotes that I found especially riveting. Fans of ‘Labyrinth‘ will like hearing about his collaboration with Jim Henson. Fans of ‘Erik the Viking’ will likely enjoy the extended behind-the-scenes look at it (which explains the reasons for the two original cuts of the picture, something that causes much discussion to this day) and fans of ‘Ripping Yarns’ will like that this was expanded upon.

Michael Palin: As much as Palin is my favourite of the Pythons now, I didn’t find this chapter all that compelling. We covered his solo movies more, such as ‘The Missionary‘ and ‘A Private Function‘, but there wasn’t much anecdotal material – it was more about the process. I did enjoy his commentary on the BBC travel shows, though: that shed some light on how it came to be. Otherwise, it was an easy read, but nothing remarkable.

The book also adds a much longer section at the end, detailing what’s been happening with Python as a whole in their later years.

They also discuss the possibility of a reunion, merchandising, pythOnline (now an ex-website), and some of the highlights of their time with Python. Then there is a lengthy tribute to Graham Chapman along with an interview with him. “The Records, the Books, the Videos” has also been expanded upon to include the latest releases – like the laserdiscs (remember those?)

All told, ‘The First 280 Years of Monty Python’ is a significant improvement over its predecessor. Sure, there are editorial issues along the way (repetition, minor mistakes, minor structural flaws, …etc.), but as an overview of all things Python, it’s really hard to beat. Granted, the Pythons themselves have written various autobiographies, but I can’t fathom what more they could add.

We’ll see. And, who knows, maybe Johnson is working on ‘The First 500 Years of Monty Python’ as we speak.