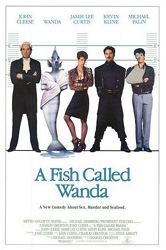 Synopsis: Four conniving jewel thieves…three Yorkshire terriers…two heaving bosoms and one proper British barrister. It all adds up to “a non-stop barrage of …outrageous plot twists and over-the top performances” when a girl called Wanda tries to deceive her Nietzche-quoting boyfriend, an animal loving hitman and an embarrassment-prone counselor out of a fortune in jewels in this hilariously funny farce!

“I was dealing with something delicate, Otto. I’m setting up a guy who’s incredibly important to us, who’s going to tell me where the loot is and if they’re going to come and arrest you. And you come loping in like Rambo without a jockstrap and you dangle him out a fifth-floor window. Now, was that smart? Was it shrewd? Was it good tactics? Or was it stupid?”

‘A Fish Called Wanda’ is a 1988 British comedy about a jewel heist and the manipulations of the co-conspirators to get their individual hands on the loot. It was co-written by and stars John Cleese and was a critical and commercial smash, landing a few awards and being for a long time the biggest-grossing British film ever in North America.

Filmed on a meager budget of 7.3 million dollars, ‘A Fish Called Wanda’ is a madcap ensemble comedy, bringing together Cleese, Jamie Lee Curtis, Michael Palin and Kevin Kline. It focuses primarily on the characters’ quirks and interactions for its humour, not on one-liners and slapstick – which exist in limited supply.

The story is simple: George, Ken, Wanda and Otto steal jewels, but Wanda and Otto have George arrested to get him out of the way. However, before they can take the money and run, George moves the money elsewhere and has Ken hide the key. Wanda and Otto must then discretely try to pry the information from George or Ken.

Enter Archie Leach, lawyer for the accused. Assuming that George would confide in his lawyer, Wanda makes advances on Archie, causing no small amount of confusion for the unhappily married Leach, and making the psychotic -and utterly moronic- Otto jealous.  Meanwhile, Ken is charged with killing the one witness to the heist.

From that point on, the film devolves into all sorts of shenanigans, culminating with an attempted murder by steamroller. Yes, steamroller.

What makes the film works so well is twofold: 1) the extremely capable cast, all relatively suited to their parts, and 2) the principal cast’s chemistry (They got along so famously that it is said that Cleese “hosted” the movie. They would also spend time playing pranks on the studio heads – like sending spoof telegrams of accidents on the set, …etc.)

“Wanda, do you have any idea what it’s like being English? Being so correct all the time, being so stifled by this dread of, of doing the wrong thing, of saying to someone “Are you married?” and hearing “My wife left me this morning,” or saying, uh, “Do you have children?” and being told they all burned to death on Wednesday.”

Archie Leach is a professional success, but he’s unhappy with his personal life: his wife is a cold, disinterested partner and his daughter (played by Cleese’s actual daughter) is a spoiled brat. He wants nothing more than to escape his life, and Wanda provides him with exactly that. But, obviously, things don’t unfold smoothly.

John Cleese plays Leach (borrowing Cary Grant’s real name, saying it would be the closest he could ever be the real thing). He’s the quartet’s straight man, and mostly gets the laughs out of the situations he’s in more so than from witticisms… or silly walks. He’s quite good, making Leach stoic and sympathetic at once.

“Aristotle was not Belgian, the principle of Buddhism is not “every man for himself”, and the London Underground is not a political movement. Those are all mistakes, Otto. I looked them up.”

Wanda is George’s con artist girlfriend, but she is sleeping with Otto on the side, taking advantage of his stupidity to eventually con him out of the money they are stealing from George. She is self-centered, manipulative and will do anyway to get her way. And even thought she has a tender side, one can never truly know if it’s on display or if she’s faking it.

Jamie-Lee Curtis plays Wanda. She is the weak link in the group because she is not as adept at comedy. Of course, the part isn’t written entirely credibly, so perhaps it’s not her fault. She hits most of the beats, though, and manages to make her character both sexy and wily at once, which is saying something.

Otto is the moronic heavy of the lot. He is a lunatic. He thinks that he’s intelligent and well-read, and makes all sorts of claims to that effect and to being a trained killer (but, really, pretentious and evidently deranged as he is, who really knows?). His jealousy clouds his already feeble mind and he goes to all ends to prevent Wanda from getting close to Archie – even if the end justifies the means.

Kevin Kline does a terrific job of playing Otto. I’m not a fan of his because I’ve often found him self-important, and a bit pretentious, but he’s marvellous here: Otto is a cartoon character, but Kline does it so well, spewing off his lines rapidly, making him quick-witted and dim-witted at once, tuning it into one outrageous performance.

“Hey, I’ve lost my stutter. It’s gone. I can speak. How much wood would a woodchuck chuck if a woodchuck could chuck wood?”

Ken is George’s right-hand man. Meek and sensitive, he is an animal lover who keeps an aquarium filled with fish (one of which is coincidentally named Wanda). He can’t bear animal cruelty, which means that Otto’s threats to his fish have significant impact. Also, in trying to kill off the witness, he accidentally ends up killing her dogs by mistake, causing him all sorts of physical and psychic pain.

Michael Palin plays Ken just right, somewhere between the caricatures he is known for and the straight-laced characters he’s also played in some of his dramedies. He make Ken extremely likeable even if, in the end, Ken is a a thief and killer. For some reason, we want to like him and we feel for him through his pain – and cheer when he gets his.

Ken is hampered by a stutter which gets worse when in conflict or under stress. Palin’s father stuttered and Palin didn’t intend to mock the condition. In fact, he later became the founder of the London Centre for Stammering Children, after he was approached by a group about the sensitivity with which he approached the subject.

Between the lot of them, they garnered many awards: Curtis was nominated for various awards for her performance (including the Golden Globes and BAFTAs), Kline won the Academy Award for Best Supporting Actor for his interpretation of Otto, and Palin won a BAFTA for his part in the picture. Cleese was nominated for an Academy Award for the screenplay.

The film is well supported by Maria Aitken as Wendy Leach, Archie’s uptight spouse, Tom Georgeson as George Thomason (no, those names are not a typos), the ring leader, and Patricia Hayes as Mrs. Coady, the dog-walking witness to the crime. They all do a superb job of fleshing out their characters and making them hilarious in their own right.

‘A Fish Called Wanda’ is the perfect example of a slightly offbeat comedy, bringing the laughs through some relatively sharp writing and situational comedy. What makes it work the most, though, is the on-screen magic of its cast, without which it would have been a good, but not exemplary film.

As it stands, though, it’s one of the more remarkable ones of the 1980s.

Post scriptum: After years of rumours and pressure, the principal cast got together again in 1997 for ‘Fierce Creatures’. Not a direct sequel, it suggested its predecessor in some areas. Sadly, it was not nearly as inspired and the film wasn’t a success. The quartet has not worked together since. 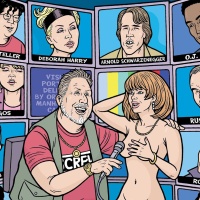 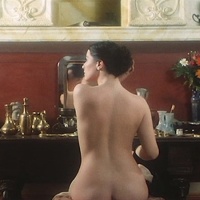 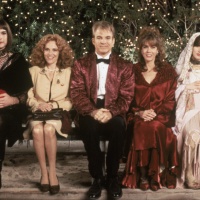 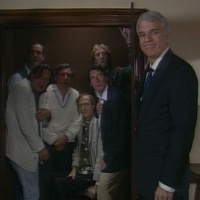