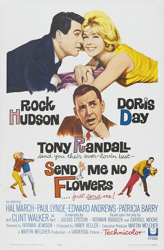 When he overhears a doctor discussing the imminent death of a patient, hypochondriac George (Hudson) believes the doc is referring to him. Convinced he’s living on borrowed time, George enlists the aid of his best friend Arnold (Randall) to find a new husband for his soon-to-be-widowed wife Judy (Day). Already alarmed by her husband’s increasingly strange behavior, Judy is even more bewildered when an old flame shows up – and George bends over backwards to encourage his advances!

The third and final on-screen teaming of Rock Hudson and Doris Day, Send Me No Flowers positively sparkles.

‘Send Me No Flowers’ is the third and final collaboration between Doris Day, Rock Hudson and Tony Randall. This time based on a play by Norman Barasch and Carroll Moore, the picture was directed by Norman Jewison in one of his first directorial efforts. He had just finished “The Thrill of it All’ (his second picture) with Doris Day and it had been a massive hit at the box office; naturally, they decided to do it again.

While I find ‘Pillow Talk‘ sexier and a very good rom-com, ‘Send Me No Flowers’ may very well be my favourite of the Day/Hudson/Randall pictures: the humour is sharper, more satirical, and with a hint of twisted, dark edge to it. Critics weren’t entirely on board at the time, but it appears that audiences felt differently: according to Wiki this one was a tremendous success, perhaps even more so than the others.

Thankfully, this time the story takes us away from the ‘Pillow Talk’ formula that “Lover Come Back‘ failed to emulate: George Kimball (Hudson) is a hypochondriac. His nightmares are filled with television adverts for pills and the latest pain relief. His medicine cabinet is a pharmaceutical treasure chest, filled with nothing but tablets. He even forgoes breakfast to limit his cholesterol intake; all he needs are his pills.

Judy (Day), his spouse, sees the folly in his ways, but keeps a cheerful outlook on the situation, poking fun at his obsession all the while trying to keep him in check. But, one day, on his all-too-frequent medical check-ups, George overhears his doctor talking about a patient with a fatal heart condition and thinks that he’s the patient in question. Thinking he only has a couple of weeks to live, he plans for Judy’s future.

Naturally, it wouldn’t be a comedy if he told Judy. Instead he decides to confide in his best friend -and neighbour- Arnold (Randall), who had been looking forward to a weekend without the wife and kids. Unfortunately, now burdened by the impending death of his friend, he grimly drinks his cares away and watches out for George, offering to write his eulogy for him in the process. George couldn’t find a more loyal friend.

Worried that Judy wouldn’t manage without him, especially after seeing how little she understands or cares about their finances, he comes to the conclusion that she will need to remarry. So he and Arnold go on a quest to find her a suitable husband – unbeknownst to her, of course. The situation gets complicated when she meets up with her college boyfriend, a hunky, wealthy oil man; George has to counter his jealousy with good will.

‘Send Me No Flowers’ is a riot.

Firstly, the trio are in top form here. Day does some great screwball comedy stuff (ex: the opening sequence when’s stuck outside in her robe), Hudson balances George’s neuroses with charm and Randall manages to make Arnold’s drinking palatable – a hard act to say the least with respect to this reviewer. Their dynamic from ‘Pillow Talk’ is even punchier; they are superb in these parts and work extremely well together.

Secondly, I love the dialogues, which are perked up with irony and social commentary: the zingers not only fly fast, but on top of talking about the parasitical nature of the medical profession and the impact it has, a point is made of addressing the superficiality of the middle class, particularly when Judy begins to gossip about the neighbours, or when George’s bachelor friend, Bert, explains to him how he preys on widows.

There’s also this terrific scene featuring Paul Lynde as a funeral home manager who is incredibly enthusiastic about his work. That sequence alone highlights the absurdity of using large chunks of land to build scenic cemeteries (a concept not far removed from that of golf courses), questions social mores (seeing as George intends for Judy to remarry, so he buys three side-by-side plots) and the morosity of funeral arrangements.

It’s a highlight of the picture for me. Another terrific sequence is when, after an argument with Judy, George shacks up with Arnold, who has finally finished his first draft of the eulogy he’s preparing – and is eager to share. Initially full of praise, he gradually scratches off one compliment after another from his text as he becomes more and more disappointed with George’s attitude. By the end, he even delights in picking it apart.

Granted, the story is slightly convoluted and there are moments that are too contrived for my taste. But ‘Send Me No Flowers’ does it remarkably well, all told. The ending (after the truth about George’s health is discovered) is stretched beyond all reason, unfortunately, but it nonetheless works better than the one from ‘Lover Come Back’, which was absolutely dreadful; at least this picture is pretty consistent from start to finish.

Although I would recommend starting with ‘Pillow Talk’ to get a taste of the Day/Hudson/Randall magic at its full potency, I think that ‘Send Me No Flowers’ has the most longevity; it can easily be transposed to this day and age without much effort. And, while it’s not nearly as idealistic, it’s inspired in ways that few comedies are. As far as swan songs go, one would be hard-pressed to find a better one than this. 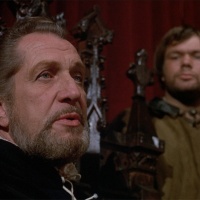