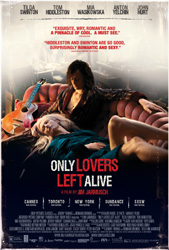 Synopsis: Jim Jarmusch’s ONLY LOVERS LEFT ALIVE tells the tale of two fragile and sensitive vampires, Adam (Tom Hiddleston) and Eve (Tilda Swinton), who have been lovers for centuries. Both are cultured intellectuals with an all-embracing passion for music, literature and science, who have evolved to a level where they no longer kill for sustenance, but still retain their innate wildness.

Adam and Eve’s precarious footing is further threatened by the uninvited arrival of Eve’s carefree and uncontrollable little sister Ava (Mia Wasikowska). Unlike Adam and Eve, Ava hasn’t yet learned to tame her wilder instincts, and her recklessness concerns Adam.

Driven by sensual photography, trance-like music, and droll humor, Jim Jarmusch’s ONLY LOVERS LEFT ALIVE is a meditation on art, science, memory, and the mysteries of everlasting love.

“I just feel like all the sand is at the bottom of the hour glass or something.”

‘Only Lovers Left Alive’ is a 2013 Jim Jarmush vampire love story. It’s the tale of Adam and Eve, a man and a woman who have been lovers for centuries. Now living on different continents, he in Detroit and she in Tangiers, they are casually living out their lives, but Even feels compelled to return to Adam when she becomes concerned about his mental health.

Adam is a reclusive musician who has profited from his recordings. He is rich enough to hire the help of Ian, a well-connected young man, to locate and get the things he needs, paying him generously for his services. But he is desperately unhappy. His most recent purchase: a bullet with a wooden tip. One. Single. Bullet. Eve’s video call came at exactly the right time.

The reason for Adam’s depression is that he simply cannot stand human beings – or “zombies”, as he calls them. He constantly muses on the way that they’ve destroyed the world, how the oil and water wars are just the tip of the iceberg. He laments the fact that their blood is contaminated now and that he has to seek out pure stock at the local hospital’s blood bank.

In his estimation, the world is no longer worth knowing.

Eve, on the other hand, is enjoying life, even though the blood supply is thinning, making it harder for her to subsist. She is friends with Christopher Marlowe, who is alive (if not so well) to this day, and who still reels the fact that Shakespeare got all the credit for his work. He has contacts and provides Eve with the most delicious type O negative refreshments.

However, Eve longs to be reunited with Adam. Once in Detroit, they visit the disintegrating cityscape and he tells her all about some of its history, its former glory days and its currently ghostly self. Their contentment in each other’s company is apparent. But this will all be thrown into a tailspin when Eva, Eve’s younger, unfathomably irresponsible, sister comes to visit.

When I saw the trailer to ‘Only Lovers Left Alive’ (before ‘Jodorowsky’s Dune‘), I wasn’t exactly impressed by it; it felt slow, unexciting. But it has atmosphere, and I liked that these vampires seemed a bit different from the glamourous or scary ones we usually on film. Plus I thought the seemingly ageless Tilda Swinton would make an excellent vampire.

So it stuck in my mind and, when a friend an I were looking for a movie to watch one Saturday night, it was my first choice (fact is, the box office options weren’t exactly stellar at that point in time). Thankfully, we were on the same page: she had been at ‘Dune’ and was very curious to see this. And thus we went out to the local art house cinema.

All I can say about it is that it’s one of those all-too-rare examples where the trailer defines the movie perfectly: ‘Only Lovers Left Alive’ had atmosphere, intriguing vampires, and Tilda Swinton was superb (as she frequently is, let’s face it). But it’s so dreadfully uneventful: it’s a slow, meandering affair that could easily be reduced by half.

Admittedly, this perfectly captures these vampire lovers’ lives: they aren’t up to much and merely hang out, putter away, letting time just slide by. It’s entirely in keeping with the perspective that one might have if one were immortal and if one had to hide away from humanity: time is surely not of essence. Except that I don’t need to watch every moment of it.

Apparently, Jim Jarmush had put a little bit of action (of some sort) in the picture, but was being pressured to add more. His response: he removed all of it instead. I respect that, I really do. I love that he wouldn’t bow down to pressure or let his creativity get bastardized by money men. But a moody vampire film defies perhaps too much a genre defined by sex and thrills.

I love the atmosphere, it must be said. I thoroughly enjoyed the drives around Detroit and the walks around Tangiers, juxtaposing the dramatic contrasts between the two cities. I enjoyed how breathy it was. But it was a difficult pairing with Adam’s misery, which was nearly incessant; I would have needed some excitement to make up for his mopiness and weighty talks.

I agreed with all that he had to say, and understood his dispiritedness, actually: How can one remain optimistic in the face of worldwide environmental devastation, mindboggling self-pollution and gross negligence? In fact, on the way to the movie, my friend and I had actually just discussed some of those very same issues nearly as hopelessly. But it was too much.

I also found that “Only Lovers Left Alive’ was predictable. Even though it took its sweet time to develop its plot, you could see most it come a mile away. Mention the sister in passing. Cue the sister’s visit. Cue the tensions. Cue her recklessness. Cue the horrible turn of events. The only thing that surprised me was how Jarmush decided to end the film.

I wasn’t alone: one person in the cinema bursted out “That’s it?”. Personally, I thought it was a natural extension and a bold move. In some way, it made sense because we were only in on one part of the couple’s journey together, and this ended at their crossroad. But it ended where other films would have begun, almost begging for a sequel (see it if you want to know more).

I was also a bit annoyed with Eve. She was extremely self-centered for someone who claimed to love her partner. She didn’t protect him from Eva, and even seemed to relish her irrational behaviour, even though it caused Adam much grief. She also fed first and would only consider him as an afterthought – almost forgetting him. She even bought him a gift with his money. Yuck.

As may be apparent, I wasn’t exactly enamoured with the characters, which is unfortunate, as they are the driving force of such a slow-building affair. But I enjoyed the aspect that they had amassed much knowledge and known many important people in their lifetimes. They had had influence but remained out of the limelight to protect themselves from the “zombies”.

And I really enjoyed the atmosphere and scenic aspects of the picture; they made up for its slowness to some degree. What I will always remember are those visuals. And I was rather impressed with Jarmush for breaking from the recent ‘Twilight‘ trend that pervades Hollywood these days; it would have been so easy to cash in. Instead, he forged his own path.

‘Only Lovers left Alive’ deserves respect if only for that.