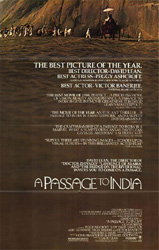 eyelights: the impressive recreation of 1920s British Raj. the landscapes/scenery/architecture. the atmosphere.
eyesores: Victor Banerjee’s acting style. the few artificial dialogues. the inscrutability of Adela’s motivations for the trial.

“He was dressed in his Sunday best, and his back collar stud was out. And there you have the Indian all over.”

‘A Passage to India’ is a motion picture set in India during the 1920s, at the time of the British Raj. Based on the E.M. Forster literary classic, this 1984 adaptation was David Lean’s first film in 14 years and his swan song, landing him rave reviews and a host of awards.

Inspired by Forster’s own journeys to India, ‘A Passage to India’ is an unflinching condemnation of colonialism and the sense of entitlement, condescension and racism that it engendered in the British who were there. Published in 1926 it must have been quite potent at the time.

The film version retains its potency. Although decades have passed since India regained its independence, the subject remains topical: anytime that a country is taken over by a superpower the dance starts anew; the empires change names, but the attitudes remain the same – in 1984 and even now.

Frankly, I wasn’t at all surprised or shocked to watch the Brits look down upon the Indians the way that they did in the movie (it’s not a new concept), but I struggled with it nonetheless: they considered the Indians savage, unclean, and incapable of upholding British standards – something that I found unpalatable.

And yet, in ‘A Passage to India’, the most likeable of the four protagonists that we are introduced to is an Indian doctor who looks up to the British way of life with unfettered optimism. Aziz is probably the kindest, most gentle and congenial character in the whole story. He truly means well.

Meanwhile, the Brits are framed in a subtly derisive light. Their attitude is considered unconscionable by the filmmakers but they are never portrayed as mean-spirited. If anything, we get the impression that the filmmakers are shaking their heads with dismay at the colonialists’ behaviour.

One scene that best portrays the gulf between the Brits and the Indians is a short scene in which Ms. Turton, the spouse of the British city collector of Chandrapore, decides to speak to the locals to show how gracious she is, but her knowledge of the language is such that it elicits chuckles.

Naturally, she does not translates this as an affront: she can’t even fathom that her inability to grasp Hindi is the cause of such laughter. If anything, she looks down on these Indian women to such a degree that she merely dismisses them as simple and ignorant. How ironic.

‘A Passage to India’ submerges us in this atmosphere through the eyes of Adela Quested and Mrs. Moore, who are there to visit Ronny Heaslop, the city’s magistrate, who is also Adela’s fiancé and Mrs. Moore’s son. Both have a respect for the Indians that the colonialists don’t and they are slightly bemused by what they’re seeing.

However, to give us perspective, we are soon privy to an exchange between some of the locals, discussing how all the new British arrivals are more receptive at first, but that they fall into the same patterns as the others over time. Thankfully, we will never get a chance to see Adela and Mrs. Moore stumble.

The story takes place over only a few days. Its focus are the interactions between Adela, Mrs. Moore, Dr. Aziz and Richard Fielding, the school superintendent, and a friend of the good doctor. Misunderstandings and misplaced expectations will have profound effects on all the participants.

I loved how slowly David Lean dragged us through the story. He took the necessary time to establish the characters, the context, the social conflicts, before taking us to the penultimate drama. It was just right, if slightly long at times. But this also contextualized the lifestyle there.

The cast is fabulous:

The biggest bone of contention, casting-wise, would have to be the fact that Alec Guinness plays Professor Godbole, and Indian man. In 1984, certainly there must have been an Indian actor perfect for the part. I don’t know that this was remotely controversial, however (perhaps because it’s merely a secondary part, whereas Dr. Aziz is a lead).

Personally, I have to give him a pass for it if only because he has a history of immersing himself in make-up, and in fact built a reputation on it earlier in his career. And since some of those roles were in David Lean films, it was only natural that they continued their collaboration in the same way as they always did.

Anyway, he is absolutely terrific, even if his make-up seemed slightly pasty, off-colour. He is so good that I watched it with a friend of Indian origin and she actually couldn’t tell that he wasn’t Indian – she didn’t recognize Guinness at all. Not bad. And he was the only exception in the whole film, so I’d say it’s acceptable.

I really enjoyed watching ‘A Passage to India’. I wasn’t blown away with it, but I found the pace just right, the story engrossing through and through, the performances excellent and the photography superb. It’s really a terrific motion picture. I’m a bit surprised that it was nominated 11 Academy Awards (it seems like a lot), but it’s not undeserved either.

I just wish that the picture had been shot in a 2.35:1 ratio, instead of 1.66:1; it seems to me that the grandeur of the locations and scenery richly deserved it. India is gorgeous. I also wish that ‘A Passage to India’ had moved me more. Somehow, for all the emotional content, I felt no significant highs or lows throughout.

But I would nonetheless strongly recommend this modern classic to anyone who loves drama and/or foreign films. David Lean is hard to beat in any context (c’mon, ‘The Bridge on the River Kwai’, Doctor Zhivago’, ‘Great Expectations’, ‘Lawrence of Arabia’, ‘Oliver Twist’, …etc.), but he truly delivered on all counts with ‘A Passage to India’.