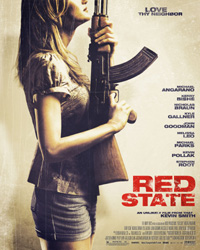 Three teenaged boys are lured to the town of Cooper’s Dell with the promise of a party. But instead of enjoying the night of their dreams, the teens are plunged into the nightmarish world of Pastor Abin Cooper and the Five Points Trinity, a fundamentalist group with a stockpile of weaponry and a deadly moral agenda. When word of the teens’ disappearance reaches the authorities, a military task force is mobilized. With Cooper’s Dell teetering between salvation and damnation, the ATF braces for a furious gun battle with Cooper and his heavily armed followers in this fever-pitched action thriller from writer-director Kevin Smith.

“You’re already dead sinner. You destroyed your spirit in a waste of shame.”

‘Red State’ is the story of three teenagers who go out on a potential booty call, but hook up with a bunch of religious fanatics instead. While trying to escape their clutches, the teenagers will get caught up in a storm – as the authorities come head-to-head with the believers’ unflinching leader. Very few characters come out of this unscathed.

In some ways, this made me think of ‘Jesus Camp‘, the critically acclaimed documentary about the indoctrination of American children in a right-wing Christian group. Having heard about such groups all my life, but having seen it for real in the doc, ‘Red State’ seemed very realistic to me; I could see how things could unfold the ay that they do here.

Surprisingly, this is a Kevin Smith film. Unlike all of his previous pictures, it’s not a comedy. It’s most importantly not a toilet humour picture. What it is is a terrifying look at religious zealotry in North America, as based on incidents that have taken place in the last couple of decades, and taken to an extreme that can chill audiences.

To say that this is Smith’s most intense picture yet is an understatement. To say that he’s turned the page and finally proven himself as a filmmaker wouldn’t be – he has finally shown true skill at constructing a picture. Say what you will about his comedies (of which I am a major fan), but they aren’t exactly crafty from a directorial standpoint.

If one had no idea that Smith made ‘Red State’, one could easily be forgiven. A low-budget picture (his lowest since ‘Chasing Amy‘), it was cobbled together by investors and was distributed independently, where it got a minor amount of exposure in cinemas. Its success comes from having been marketed directly to its intended audience.

But it fell off the radar of public consciousness, if ever it was truly on it. ‘Red State’ is mostly known, if not notorious, for the way that Smith sold the picture: he set up an auction for distributors and shocked everyone by ignoring them all and buying it from himself for 20$. Essentially, he did a bait-and-switch in exchange for the publicity.

The media reaction was extremely negative, with most people lambasting Smith’s move and writing him off as washed up. He got a lot of coverage, and one can always argue that no publicity is bad publicity, but one has to wonder if his tactic will have in fact burned the bridges that some people claims he’s torched. Will it prove detrimental in the future?

Whatever the case may be, ‘Red State’ was worth the attention and time. Even if it proved to be Smith’s final film, a claim he’s made few times (and which he consistently contradicts himself on), it would be a terrific way to wrap up a solid, if inconsistent, career: ‘Red State’ is as good as it was intended to be, and it works on many levels.

Part of the reason why it succeeds is because Smith obviously had a message to convey, something he was passionate about (which he confirmed with a small closing sequence that had Goodman and his colleagues discussing the aftermath of the story). He was able to tap into an inner fire not seen in a long, long time, and put it all in his screenplay.

Of course, it would all be for naught if he hadn’t made a coherent picture. Fact is, not only is it coherent, this may very well be Smith’s best picture as far as directing and editing goes: most of his choices are absolutely perfect, setting up each moment and creating tension like a total pro. It’s intense enough that I even got goosebumps at one point.

Heck, even the soundfield was used to great effect, with creepy soundscapes (but not traditional motion picture score music) adding to the tension, or gunfire blazing around the room. No other Smith film matches this in any capacity – his films are notoriously no-frills, with little attention being given to the set-ups, framing or the audio.

He also made great casting decisions:

What’s astounding is that, in ‘Red State’, even the good guys are bad, making unethical choices simply to bury their mistakes. The most laudable of the bunch are caught in the machine, trying their best to survive (from a professional or reputation standpoint – or, at times, quite literally) all the while doing what is asked of them. Smith clearly doesn’t wear rose-coloured glasses.

If I had a gripe about the picture, it would be with the ending. By the time that I found out that it was Smith’s second choice, I already felt that it wasn’t as strong as it could have been; I felt that Smith had sold himself short just to wedge an even more direct message into the picture. I would have preferred something more chilling.

Of course, it’s very likely that part of the reason why this didn’t happen is that this was made on a damning budget.  Smith likely wouldn’t have been able to go with his original ending on the money he had on hand (ex: the special effects budget for the whole picture was a mere 5000$!). So I’ll give him the benefit of the doubt here, and hope that the next time he’ll be able to go all out, not cop out.

‘Red State’ starts off as a scary thriller that makes one expect something gruesome in the ‘Saw’ or ‘The Hills Have Eyes’ vein, but then turns into a suspense piece that recalls the Waco incident. It’s not as relatable as most of Smith’s previous pictures, but it’s very well-conceived – there’s no sloppiness or poor production on hand.

And while it’s likely no one’s idea of a masterpiece, Smith has pushed himself well beyond his previous limits. He has broken the rules by which he’s played for almost two decades. And it’s a welcome change. If Smith continues to deliver on this promise, he will leave some of us rapturous with delight. Even if it means the end of Jay and Silent Bob. 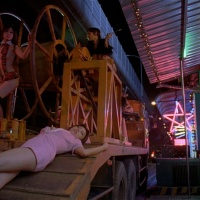