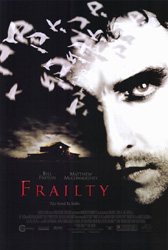 Synopsis: No Soul Is Safe.

I’m not a Bill Paxton fan. There’s just something about this onscreen presence that doesn’t work with me. Is it because he acts in an unrealistic fashion, a tad cartoon-like? Is it because he usually plays unpleasant sorts that I can’t stand? Or is it just that I hate his stupid face (not that he is literally stupid-looking or that I actually hate his face… I’m just trying to make a point)?

I don’t know for sure, quite frankly.

But one thing I can confirm is that his turn as director and star of the waaaaaay under-rated ‘Frailty’ is nothing short of brilliant – so much so, in fact, that this film (with the help of Sam Raimi’s ‘A Simple Plan’) has pretty much redeemed him in my eyes. In fact, I actually want to give him a chance (or two!) before I ever write him off again – something I wouldn’t have believed a decade ago!

In ‘Frailty’, Paxton plays the devoted single father of two young boys. They lead a pretty conventional small town life and everything is good. One night, however, he wakes his sons up to tell them that he was visited by an angel, and that he was told that he and his family would hereforth become demon slayers – hunting down demons hidden in their midst. From that point onward their lives change radically, as a path of destruction carves itself before them.

Despite Paxton’s star status, the story is almost always developed from Fenton (the eldest son)’s perspective. He’s the rational one, the disbeliever, and he sees the situation with much of the same incredulity that the viewers presumably does. Thus, we sympathize with him, thrown into one disquieting situation after the next, as he watches his father tumble into madness, sees his family get torn apart and as he is subjected to torments no child should have to endure.

The casting of that role was nothing short of marvellous: Matt O’Leary brings intelligence and emotional honesty to the Fenton character in a way that one rarely sees on screen at such a young age. I had no trouble believing every scene and every little moment that involved him, even if the other cast members (notably the boy playing his younger brother) were sometimes hamming their way through their dialogue. He’s convincing enough for two, and it made a dramatic difference in this film. I would love to see what else he’s done.

Meanwhile, Bill Paxton holds up fairly well for once. I believe that it’s because he plays a well-meaning, but tortured, person this time – as opposed to playing his traditional “bad ass” role. As noted above, he did some great work in ‘A Simple Plan’ and I think that he was enjoyable for largely for the same reason. Meanwhile, Matthew McConaughey shows up in a more minor role and he annoyed the heck out of me with his numb face and monotonous delivery; what was probably meant to be gravitas was more off-putting than anything else.

One of the key strengths of this film is the amazing script, full of minor twists and deceptions – enough to keep the viewer constantly uncertain about what is actually going on. I love that we’re unsure which side to take and whether to believe what we see or not; it makes for a multi-layered experience and it means that repeat viewings are possible, and are enjoyable. As well, the film was written on the principle that the scariest films hardly ever show violence (or gore) onscreen – they leave everything to the viewer’s imagination instead. Hitchcock knew this, and these filmmakers do too.

‘Frailty’ is not for the faint of heart: it is twisted, sombre, and darkly funny. It not only pokes fun at, but takes an axe to, religious faith in ways that defy convention – it floats between the lines and isn’t always overt in its intentions. By questioning religious beliefs and providing very few solid clues or answers along the way, the film essentially mirrors the dangers of zealotry – and, by doing so, it could be argued that the filmmakers were being irresponsible (for instance, if this film were watched by someone with unsure footing, it wouldn’t be surprising for its content to send them down a slippery slope).

But, to me, that’s also part of its brilliance: it takes a very sensitive issue and shines a bright light on its pock marks and scars for all to see. It will certainly offend, trouble, and shake some. Yet it will even entertain and amuse others. But, most notably, it is great discussion-fodder: What is the nature of faith? What would you do if faced with the same situations as depicted in this film? Who do you relate to the most in that story? What were the filmmakers trying to say? Is this film (ir)responsible? …etc.

In my mind, and from many perspectives I might add, this film is one of the best offerings of the last decade. I rank it up there with ‘Memento’, ‘Bin-jip’, ‘Unbreakable’ and ‘Eternal Sunshine of the Spotless Mind’ as some of the best cinema I’ve seen in recent memory. It may not be for all tastes, but ‘Frailty’ is anything but a weakling. To those who can handle it, I’d highly recommend tuning the lights down low and delving deep into the heart of darkness. 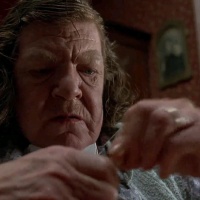