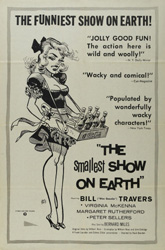 Synopsis: When their long-lost great uncle dies, newlyweds Matt and Jean Spencer (Bill Travers and Virginia McKenna of Born Free fame) inherit a small-town fleapit cinema along with the theater’s eccentric and inept staff: Drunken projectionist Percy Quill (Peter Sellers), dotty cashier Mrs.Fazackalee (Margaret Rutherford of Blithe Spirit) and ancient usher/janitor Old Tom (Bernard Miles of Heaven’s Above! and The Man Who Knew Too Much). But once the struggling couple is forced to renovate and operate the decrepit Bijou, they learn some uproarious lessons about life, love, big business and the enduring magic of the movies.

The Smallest Show on Earth 7.5

eyelights: the plot. the Bijou. The Bijou’s permanent staff.
eyesores: the quick wrap-up.

‘The Smallest Show on Earth’ is the story of Matt and Jean, a couple of dreamers who inherit a cinema and then plan to sell it and live off the earnings – not knowing that the Bijou is a decrepit old building that has been losing money for years. To make matters worse, their only prospective buyer is a competitor who insists on playing hardball with them – in response to which they see no other choice but to call his bluff, starting a series of events they can’t seem to get a control of.

Nicknamed “the flea pit”, the Bijou is held together by three aging, long-standing employees: an usher, a cashier and a projectionist – played respectively by Bernard Miles, Margaret Rutherford and Peter Sellers. For all intents and purposes, they are the heart of the cinema, and the picture: all three actors are outstanding in their roles, making it easy for us to empathize with their respective characters. Rutherford was a brilliant stage actress, of course, and Miles an accomplished screen actor, but even Peter Sellers (who sometimes overacts) infuses life to his part.

But, in many ways, the charm of the film is dictated by the Bijou itself. It’s the mark of a bygone era: an old theatre that was later transformed into a picture house, it has overarching balconies at the back and sides, an old organ to accompany silent pictures with, and an aisle right down the middle. It has such a classic, vintage vibe to it that it immediately has an allure that other cinemas don’t. Even the exterior architecture speaks of a different era, with its domed roof and columns. It really is a unique building by today’s standards.

The key problem with the Bijou, aside from the sad condition that it’s in, is its location: it is wedged right next to a passenger train track. This track was built only a few decades prior and it has been the downfall of the cinema: with its regular shuttles running back and forth right along the Bijou, there’s enough noise to drown out the movies playing on the screen, not to mention the shockwaves sent through the cinema – vibrations strong enough to rattle the patrons and staff in their seats. This situation is obviously really not good for business.

However, this also makes for quite a number of comical situations. These impediments may be a terrible attraction with everyday crowds, but it plays well to some, especially when combined with the right movie – in this case Westerns involving train robberies and cavalries. The crowds that gather at the Bijou seem to appreciate the violent shakes and play along with it as though it were a feature of the motion picture. They also get a kick out of hearing the real train station’s announcements playing discrepantly over their film, providing amusing twists to its dialogues.

Thankfully, while moments like these were slightly exaggerated for comic effect, it wasn’t more so than can be expected in one’s standard comedy. Granted, the film presentations were a little offbeat, and by today’s standards particularly vibrant, but it all fell within the margins of credibility – one could imagine these things happening in real life. This may be the film’s greatest asset: a sense of reserve that played out in the situations, the characters’ interactions and even in most of the performances. If not for this, the film might have been too wacky to be enjoyed.

If it has any flaw, ‘The Smallest Show on Earth’ ended far too swiftly. To me, it was as though the filmmakers were suddenly in a hurry to wrap it all up, to get it over and done with. While the intention may simply have been to leave the audience on a frenetic high, to me it feels as if they served dessert and only gave us 30 seconds to enjoy it before they pulled it from under our noses. Personally, I would have liked a slightly longer ending, perhaps by a minute or minute and a half, just to ease out of it, to savour the turn of events and say farewell to the characters.

Otherwise, ‘The Smallest Show on Earth’ is a cute little film with a fitting tittle. It may not be the greatest picture show on earth but it’s clever enough, droll, well-conceived and, above all else, it’s a jolly ol’ time. Plus which it doesn’t overstay its welcome; it breezes by at the correct pace, developing its core story and its characters in a way that feels right given the circumstances. It’s a terrific picture for a Sunday, holiday or any other lazy day and I’d highly recommend it to fans of British humour and oldies; it may be a small show, but it’s a classic for a reason.

One response to “The Smallest Show on Earth” 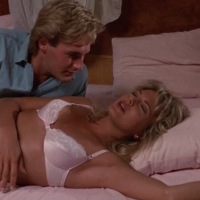