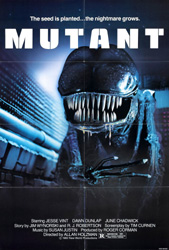 ‘Mutant’ is the unedited version of ‘Forbidden World‘; it’s the film that director Allan Holzman had intended to make. However, he and Roger Corman, who financed the picture, had differing views about the humour in the original cut and Corman decided to remove most of it, thinking that the film should play more seriously (he also had the name changed because no one, at the time, knew what a “mutant” was).

Unfortunately, in doing so, he made the picture funny for entirely different reasons: it morphed into something laughably bad.

The original version of the film isn’t dramatically different. In fact, I had to consult Movie-Censorship.com to be 100% sure of the changes that were made. Because, as I watched the movie, it occurred to me that the footage being re-inserted was just a few bits here and there – enough to change the tone, but not the substance of the scenes.

If anything, it just proves the power an editor can hold over a picture – how missing a beat, using different shots, or even moving the footage around can give a film a complete make-over. As I watched ‘Mutant’, I was surprised by the fact that it didn’t seem incompetent like ‘Forbidden World’ was. I wasn’t moved by it more, nor did I get all of the humour, but at least I didn’t hate what I was seeing.

(As a side-note, there is a fascinating documentary on film editing called ‘The Cutting Edge: The Magic Of Movie Editing‘ that is available on the Special Edition DVD, and in high definition on the Blu-ray, of ‘Bullitt’. It is a must-see for anyone who wants to get a sense of how motion pictures are made. I loved it, and I don’t usually like technical stuff – it’s that good.)

One could argue that I was simply immune to it the second time around, but from all accounts I don’t seem to be the only one who prefers this version over the ‘Forbidden’ one. It also helped that I subsequently watched the film with the audio commentary, which grew my appreciation of it slightly: Holzman discusses the making of ‘Mutant’ at length, including the reasons why he made the movie and why it turned out the way that it did. It was candid, informative, but not judgmental.

Unfortunately, ‘Mutant’ is only available in this crummy DVD copy that looks like it was mastered from a VHS tape: it’s pan and scan, all fuzzy, and I think I recall seeing some tape damage at one point. Of course, it was also only released as a bonus feature with the ‘Forbidden World’ Blu-ray, so it’s hardly surprising – a remastering job probably wasn’t ever a consideration when it was dug up from whatever abyss it was tossed in thirty years ago.

But I wish it had been. While I had immediately dismissed ‘Forbidden World’ as a picture I would likely part with soon after, I know that a part of me will want to watch ‘Mutant’ again someday – so I would have loved to have a decent copy of it.  Admittedly, it’s not like it would make a huge difference, given the low quality of the production, but I’d much prefer to have ‘Mutant’ in high resolution (or at least uncropped) than ‘Forbidden World’. Still, I’m glad to have it.

‘Mutant’ may only be longer than ‘Forbidden World’ by slightly less than 5 minutes, but the minor adjustments made here and there actually improve the picture substantially. That’s not to say that it’s grandiose filmmaking, but it’s a decent enough b-movie – for a rip-off of ‘Alien’ and ‘The Thing’, that is.  Anyone who loves b-movies, especially in the horror and sci-fi genres, would be well-served by ‘Mutant’. The general public, however, should steer clear of it and go with the real thing instead.

One response to “Mutant”