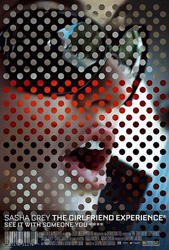 While I’ve always adored ‘Sex, Lies and Videotape’, and I recognize not only the box office mojo but indie cred of Steven Soderbergh, I can’t say that I’m a fan. I’ve only seen a few of his films and, quite frankly, ‘Erin Brockovich’ and ‘Out of Sight’ really didn’t do anything for me. In fact, I’ve simply just tuned out anything he’s done since; I’m aware of it, but I don’t care. I don’t really know why, but I’m totally dispassionate about his projects.

So I was curious to see is Grey would rise to the occasion and I picked up the film – which, unsurprisingly, was not available at the library.

My assessment is that, at first, one gets the feeling that she’s just a total drone – that she can’t act, therefore she doesn’t. In fact, one sometimes gets the sense that Soderbergh purposely masked her limited performance by hiding her behind large sunglasses, by blurring the picture, or by using angles that conceal her behind props. Frankly, no regular actor would accept this, seeing as they would want their performance to be there for all to see – so it was easy to dismiss her performance as non-acting.

But, then I started seeing veritably real moments emerge from her. When her character was speaking with friends, or her boyfriend (as opposed to when she was with her clients), she seemed to wake up from her stupor and almost became another person altogether. There may actually be some talent behind the jaded exterior after all, and it has made me even more curious to see what else she will be doing as a ‘legit’ actress (for the record, she has also made ‘Smash Cut’ with Lee Demarbre and has just been confirmed for the next season of ’Entourage’. A part of me also wonders if Soderbergh purposely toyed with us in this way in order to highlight what talent she does have – that his little ‘masks’ were just a subterfuge. I guess that I will now have to listen to the audio commentary to find out if there’s any hints or answers hidden in there – at this point, I’m really curious…

B-t-w, I know that I’ve omitted any mention of the story. Well, that because the story is pretty plain: it’s about a couple and how they manage to develop and merge their professional and personal lives – she, as a call-girl, and he, as a fitness instructor. It’s slow, and it’s shot in a reality TV sort of way, so it feels like you’re not watching a scripted film – which, of course, you are. But, aside from this, it’s nothing extraordinary or particularly memorable.

Having said this, ‘The Girlfriend Experience’ is still a good cinematic experience. It probably won’t be remembered decades from now, but it’s certainly worth the mere 78-mins it requests of one’s time.