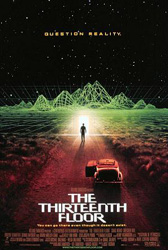 Synopsis: You Can Go There Even Though It Doesn’t Exist

The barriers that separate fantasy from reality are shattered in this stylish, mind-jarring thriller, where two parallel worlds collide in a paroxysm of deception, madness and murder.

On the thirteenth floor of a corporate tower, high-tech visionary Douglas Hall and his high-strung colleague Whitney have opened the door to an amazing virtual world – circa 1937 Los Angeles. But when the powerful leader of their secret project is discovered slashed to death, Hall himself becomes the prime suspect. Arriving from Paris is the beautiful and mysterious Jane Fuller claiming to be the murdered victim’s daughter. Her instant, magnetic attraction to Hall only further blurs the lines of what is real. Is he the killer? Is the inscrutable Jane somehow connected? To find the answers, Hall must cross the boundaries into the simulating reality he has helped create – and confront the astonishing truth of his own existence.
***********************************************************************

One of the most under-rated sci-fi films in the last couple of decades, ‘The Thirteenth Floor’ is ‘The Matrix’’s less aggressive (or dystopic!) sibling. ‘The Thirteenth Floor’, which is based on the novel ‘Simulacron 3’ by Daniel Galouye, also delves relatively deep into our sense of reality, but it wraps it all up in a murder mystery that unfolds at a leisurely, but gripping, pace.

It’s a low-budget affair, so don’t expect any great eye-candy aside from very interesting locale and truly impressive architecture – the few special effects that are on hand are completely dated. But the performances are solid, the story is engaging and the movie should be worth a few moments of intriguing dialogue with the right crowd.

(ironically, ‘The Thirteenth Floor’ and ‘The Matrix’ came out at about the same time, but this one faltered at the box-office, over-shadowed by the other’s tremendous success. As well, it was frequently derided by Matrix “fanboys” as a rip-off, when it really is a dramatically different tale – and one that should have become, if not a financial success, a recognized classic in its genre).