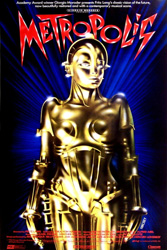 Synopsis: In 1984, Academy Award®-winning composer Giorgio Moroder (Midnight Express, Flashdance), introduced Fritz Lang’s science fiction epic METROPOLIS to a new generation of moviegoers. Working in collaboration with film archives around the world, he supervised a special reconstruction of the film, with color tinting, fewer inter-titles, and newly restored footage. A pioneer in the field of digital music, Moroder backed this special edition with a throbbing new score, punctuated with pop songs from some of the biggest stars of the early MTV era: Freddie Mercury, Pat Benatar, Adam Ant, Bonnie Tyler, Loverboy, and others.

eyelights: its visuals. its plot. its scope. its set design. its performances.
eyesores: its discrepant score and soundtrack.

“Why do we treat the workers so badly?”

It’s hard to imagine, but, there was a time when the science-fiction classic ‘Metropolis’ had been relegated to near-obscurity. Though it was considered a classic by many, through the years much of the footage had been lost – amounting to nearly a quarter of the original.

For years, most people only got to see a truncated version of it.

In the early ’80s, legendary music producer Giorgio Moroder, a huge fan of the film, took it upon himself to track down as much of the footage in order to revitalize the picture. He drew on as many sources as he could find around the world in order to cobble it together.

Inspired by an Australian copy of the film, which was tinted in the techniques of the time, he decided to add colour to his version of ‘Metropolis’. Further to the tinting, he added touches of colour to about four minutes of the film and replaced some intertitles with subtitles.

Controversially, Moroder also created a completely new soundtrack. Though ‘Metropolis’ was a silent film, back in the day silent films were often presented with live music. So he took it upon himself to create a synth score and even added a few pop songs to the mix.

This was the very first version of ‘Metropolis’ that I saw.

Frankly, it was a mess: the plot was slightly incoherent, the action a bit manic and the soundtrack made me want to tear my ears off and feed them to the VCR. I just couldn’t believe that this was supposed to be a classic; to me, it was campy drivel. I never saw it again.

Something like 15 years later, I got the chance to see the 2002 “Restored Authorized Edition” on DVD. After discovering that Moroder’s version was incomplete, something I didn’t know then, and that his score wouldn’t be on this one, I decided to give it another chance.

I was blown away.

I was so blown away with it, in fact, that despite having a good DVD copy of it, I splurged on 2010’s “The Complete Metropolis” blu-ray, which boasted footage that had recently been found in an Argentinian Museum. The picture was finally almost complete (though damaged).

It was stunning, a masterpiece.

I was so thrilled with it that I then decided that it might well be worth going back to revisit and reassess Giorgio Moroder’s version of the film. Perhaps the more complete and accurate version would increase my appreciation of his efforts. Perhaps I might even enjoy it.

It had been a few years since I’d seen “The Complete Metropolis” when I watched the Giorgio Moroder version for the second time. Though it wasn’t intentional, this distance was probably essential for me to appreciate this 1984 version, which was heavily truncated.

Despite being more complete than most versions released before it, one thing that reduced the runtime was Moroder’s decision to remove many of the intertitles, sometimes replacing them by subtitles – a not unreasonable step in order to present it to modern audiences.

Unfortunately, the change was inconsistent: Moroder shifted back and forth between intertitles and subtitles with seemingly no rhyme or reason. As well, some intertitles were animated while others weren’t, and some were served up in odd formations and various colours.

Perhaps it was intentional, but it feels quite random, haphazard.

In any event, by removing a large number of intertitles, Moroder cut dramatically into ‘Metropolis’ runtime, as there are fewer pauses during the action to provide narration and/or dialogues. In so doing, he released the picture of its shackles, allowing it to build to a frenzy.

I don’t remember the vibe of the “full-length” version, but this one feels frenetic: the action is quick and scenes plough into one another at a rapid pace. In fact, the only slow-going moments in Moroder’s edit are the lost scenes that were recreated with still archival images.

Naturally, since the picture was silent, the filmmakers couldn’t depend on dialogues and soundscapes to keep their audiences engaged, so that isn’t really surprising. But anyone who feels that today’s movies are hyper-kinetic need to see some older motion pictures as reference.

In this case, however, the images are bolstered by Moroder’s customized soundtrack, which, in some cases (ex: the opening title cards backed by a dance beat!) actually increases the pace. So even some of the slower moments get their momentum skewed by his choice of music cuts.

Though Moroder’s synth score is actually enjoyable, it’s a bit discrepant at times; one gets the impression that he was scoring an entirely different movie. The song selections are far worse: the pop tunes are a discrepant lot that give the movie a nearly surreal quality.

Adam Ant? Pat Benatar? Billy Squier? Bonnie Tyler? You can barely get more impotent than that. Even Loverboy have little-to-no-edge on this soundtrack. At least the score gives the picture a pseudo-futuristic (albeit anachronistic) quality. These songs are completely out of place.

Plus which they’re often abruptly abridged.

The core plot remains the same, of course, and the splendour of Fritz Lang’s vision remains a wonder to behold; the scale of the sets, the brilliant cinematography, the choreography, the maquettes, all come together to create a vision of the future as unique as it was original.

But Giorgio Moroder’s edit presents the material in a way that makes it difficult to take the picture seriously. Due to his misplaced changes, and sometimes unusual choices, he amplified the unintentionally campy qualities of a science fiction epic, a masterpiece, neutering it.

It’s interesting to watch, but it’s merely a curiosity.

Released in 1984, Moroder’s version of ‘Metropolis’ is essentially a remix: it takes the original aspects of the work and repurposes some of it, giving it a new flavour. It remains recognizable, but it’s not at all Fritz Lang’s vision; it’s the combining of disparate creative forces.

It wasn’t received especially well. Despite his noble intentions, Moroder’s efforts were considered a travesty in some circles and his new score landed him a couple of Razzie nominations. However, it did bring attention to the film and further efforts were made to restore it.

By the turn of the century, new footage had been found, and recently even more was discovered. Now, thanks to Moroder’s work, we have a nearly complete version of Fritz Lang’s ‘Metropolis’. Love it or hate it, his peculiar take on the film helped bring it back to life.

For that reason alone, it actually has historical significance.

Though its replay value is questionable.