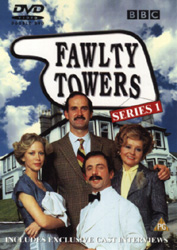 Synopsis: Basil is a much put-upon, hard-working hotel ‘manager’ whose life is plagued by dead guests, hotel inspectors and riff-raff. His biggest headache is a ‘nest of vipers’ – his nagging wife Sibyl (Prunella Scales). Together they run their hotel, Fawlty Towers, with a little help from the unflappable Polly (Connie Booth), and hardly any help at all from Manuel (Andrew Sachs), the trainee waiter from Barcelona who is as mad as his boss and the butt of all his frustration.

“I’ve never been to such a place in my life!”

I wasn’t a huge fan of Monty Python when I first discovered ‘Fawlty Towers’ in the mid-’90s. In fact, I was probably only a fan of ‘Holy Grail‘ and the “Ministry of Silly Walks” sketch at the time; I didn’t indiscriminately pick up anything at all related to Python then.

However, I did consume just about any videorecording that fell within my reach. And, at the time, the local library had a vast collection of VHS tapes and laserdiscs. After having gone through all of the standard fare, I started scratching the surface for eclectic stuff.

That’s when I caught sight of ‘Fawlty Towers’.

That’s also when I fell in love with it.

The show, which was written and stars Monty Python alum John Cleese along with his then-spouse Connie Booth, was originally broadcast on the BBC in 1975. The six-episode series is set in a small Torquay hotel, which its hapless staff hopelessly tries to keep afloat.

It’s based on a real-life experience that Cleese had in 1970, when he was on location for a Monty Python shoot, and encountered the most rude hotel manager that he’d ever met. After seeing the man in action, he returned with Booth and studied their subject further.

And then wrote a show about it.

The episodes, which run approximately 30 minutes each, all revolve around a simple scenario in which their lead, Basil Fawlty (Cleese), could manage to make a fool of himself. It’s a character-driven piece that’s a mixture of sardonic wit, absurdity and slapstick.

Naturally, it all depends on the character dynamics, the roots of which consist of the snobbish, temperamental and cowardly Basil and his demanding, lazy and irritating spouse, Sybil. They’re complemented by Manuel and Polly and a few minor side characters.

The balance that’s struck between all of them is pitch-perfect: Basil is the grossly incorrect centrepiece, Sybil’s sole existence is to trigger him, Manuel (whose English is so poor it creates confusion) is the cartoon comic relief, and Polly is the (mostly) level-headed one.

Much of the humour revolves around Basil’s antics, most of which are innocuous, but which devolve dramatically due to his miserly, selfish, uptight and negligent ways. He’s the type of person one wouldn’t want to know for real, but who’s a treat to laugh at.

Cleese is absolutely perfect in the part; he’d already made a name for himself playing stuffy, cantankerous characters in Python, and here he uses that type as a launching pad. Then he adds a touch of the absurd and some of his unique physical qualities to the mix.

The whole cast is quite brilliant at what they do: Prunella Scales is aloof just enough to make Sibyl equally condescending and entitled, Andrew Sachs is adorable and friendly enough to counter Manuel’s gross inability and Connie Booth is sharp and grounded as Polly.

The series’ six episodes wouldn’t be of the same caliber without them.

1. A Touch of Class: This first episode introduces us to the key players, beginning with Basil getting nagged by Sybil, and followed by a communication breakdown with Manuel over the breakfast trays. It follows two paths: Basil trying to put a painting up on the wall, but constantly getting interrupted, and his catering to a high class guest.

In the first part, it’s quite funny to see him frantically try to fulfill Sybil’s demands even though he’d rather focus on other things; he’s clearly terrified of her. Then he expresses his irritation with snide and sarcastic remarks like “Drive carefully, dear”. John Cleese’s manic energy comes up in hilarious spurts in this one and it’s pure delight.

In the second part, Basil is dismissive of, and excoriatingly rude to, a younger man because he thinks he’s riff-raff – but is embarrasingly sycophantic to a man who claims to be Upper Class. Naturally, neither are what they appear, which leads to a droll moment when Basil is bewildered by the contents of the Lord’s briefcase and freaks out on him.

It’s an excellent episode which is only marred by the tedious misunderstandings between Basil and Manuel (once or twice would have been enough!) and a truly poorly-executed piece of slapstick involving Manuel and Lord Melby at the end. If not for those, I think that this would be a pitch-perfect debut for the series. It’s still pretty terrific, though. 8.0

2. The Builders: While Basil and Sybil are away on holiday together, a construction crew is scheduled to come in and fix the garden wall. Sybil is sceptical it will get done and, naturally, Basil hired the cheapest contractor that he could. He returns to find the kitchen and dining area closed up. Now he has to get the damage undone before Sybil finds out…

This one’s fun for two reasons: 1) other characters (Polly, Manuel, the permanent guests) start getting fleshed out, and 2) Cleese gets to unload Basil’s fury: he has an outrageous argument with Polly, which devolves and gets physical, and he and Manuel have a terrific slapsticky bit together. It’s all very contrived, sure, but there are tons of laughs to be had. 8.0

3. The Wedding Party: Ever the snob, Basil won’t give a flirty couple a room together – not knowing that they’re Polly’s friends and that they’re here for their own wedding. This leads to a bevy of embarrassing misunderstandings. Meanwhile, a French tourist has her eye on Basil, putting him in compromising positions.

The joy of this one is seeing just how unrealistically uptight Basil is, how everything turns into a double entendre with him. Clearly, he‘s the only one with a dirty mind there. He also reacts to some of the situations like a total lunatic, which is a gas. And then there’s Manuel’s hangover from his birthday bash, leaving him all slomo and limp.

Again, it’s all very contrived, but amusing; there are terrific lines and performances here. 8.0

4. The Hotel Inspectors: When Sybil tells Basil that there’s a rumour of hotel inspectors doing the rounds, he begins to believe that a very neurotic and demanding guest who keeps interrupting him may be one of them. Naturally, Basil bends over backwards for him, despite his extreme rudeness, which causes chaos at the hotel.

This one has a few prize moments like the hilarious bickering between Basil and Sybil (he’s blisteringly sarcastic, moody, and dismissive), and Basil’s final meltdown, which is outrageous, but totally appropriate. It’s not really a plot-driven episode; it’s all in the dialogues and slapstick. But that’s what makes it so delicious. 8.25

5. Gourmet Night: Sybil has hired a new chef, and Basil decides to have a Gourmet Night on Thursdays to attract a higher class of clientele. It’s a black tie affair but, naturally, it all goes to Hell: the chef gets drunk over Manuel, and Basil’s back-up plan falls apart due to his insistence on personally fixing his own car; his vehicular misadventures leave Polly and Manuel trying to entertain the bemused guests.

It’s a decent episode but it’s a bit substandard compared to the others. It’s fun for the panic at the end and it was enjoyable to see André Maranne (a.k.a. François from the original ‘Pink Panther‘ series) in a bit part as the head chef of a local restaurant that Basil pays to help him out of his predicament. But it’s predictable and not entirely realistic. 7.5

6. The Germans: Unlike the other episodes, this one begins at the hospital; even the outside shot of Fawlty Towers is replaced by a shot of the hospital. It turns out that Sybil’s spending three days there for a hangnail. Naturally, her absence means that Basil is going to make a mess of things – especially once he gets a bump on the head.

This one’s a classic because it broaches prejudice, spotlighting Basil’s xenophobic tendencies: he backs away from a black doctor, he and the Major discuss an Indian football match in terms that wouldn’t pass muster today, and a group of Germans check in – leading Basil to perhaps the most outrageous display of impropriety in TV history.

Further to that, his putdowns of Sybil are delightfully incisive and there’s a silly bit in which the Major thinks a moosehead is talking to him because Manuel is behind the counter, hidden. But it’s Cleese’s performance, making Basil demented as only he could do, that takes the cake; it’s utterly ridiculous, culminating with goosesteps and a chase. 8.5

‘Fawlty Towers’ is shot both in a studio and on location (for its few outdoor bits) and it plays out very much like theatre, being as character-driven as it is. It would surely translate well to the stage, and I wouldn’t be surprised to find out that someone has adapted it at some point.

That’s what I like about it: the humour is rooted in the dialogues and performances, not in artifice. Yes, there are contrivances along the way, but Cleese is above all an intellectual and a wordsmith, so the scripts he and Booth wrote were honed for maximum impact; they’re sharp.

It doesn’t prevent the show from indulging in some physical comedy from time to time, of course, and what little there is is quite good – at least where the main cast is concerned. It all boils down to the talent; Cleese and company were undoubtedly the best picks for their parts.

Interestingly, the show wasn’t entirely well-received at the time. It grew over the course of its six week-run, however, and is now recognized as one of the greatest British comedies ever produced. And Basil Fawlty has become Cleese’s most recognized and popular role worldwide.

And yet, despite this, it would take four years for a second series to see the light of day…