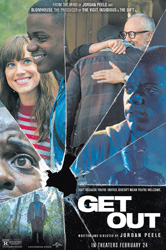 Synopsis: When Chris (Daniel Kaluuya), a young African-American man, visits his white girlfriend’s (Allison Williams) family estate, he becomes ensnared in the more sinister, real reason for the invitation. At first, Chris reads the family’s overly accommodating behavior as nervous attempts to deal with their daughter’s interracial relationship, but as the weekend progresses, a series of increasingly disturbing discoveries lead him to a truth that he could have never imagined. This speculative thriller from Blumhouse (producers of The Visit, Insidious series and The Gift) and the mind of Jordan Peele (Key & Peele) is equal parts gripping thriller and provocative commentary.

“If I could, I would have voted for Obama for a third term.”

Being a white male, I obviously know very little about the experience of being non-white in a largely white society. All I know is how my non-white friends feel when they’re persistently asked where they’re from, even if they were born here. Or how they feel being judged for their names and losing opportunities before even being met.

I only know what I see around me – with my Caucasian eyes, biased by a Caucasian experience. I can get what it’s like being non-white no more than I can get being a woman or being gay. I can only try to listen and assimilate what is related to me by the victims of prejudice and try to affect my (and others’) behaviour as best as possible.

But it’s not easy, even if your heart’s in the right place; sometimes prejudice creeps due to circumstance, societal mores, politics and/or even the media. It can become very hard to filter all the noise out and keep your mind open (and, when your mind closes, so does your heart). Plus which, prejudice can run both ways, making it even harder.

All you can do is try in earnest.

My first recollection of prejudice was a fight that I saw at a local mall when I was probably three years old. As my parents and I walked out to our car, two young men, one black, one white, got into a fight. I don’t know the context one bit, having forgotten many details, but I vividly remember how appalled I was by seeing pure hatred.

…coming from the Caucasian guy.

I don’t think I’d experienced such intense hatred before because it’s left a stain on my heart: though I’ve forgotten many things, I remember this incident to this day – and will to my dying day. Again, I have no sense of the context, but I somehow recall it as having had a strong racist component (maybe he blurted out the N-word…?).

I don’t know what it’s like being on the receiving end of that. But being a bystander is enough for me. Having to experience this kind of !@#$ regularly will pollute a person’s view of the world – it must bring your guard up permanently, build walls around your heart, maybe seed some paranoia, and skew your perception of yourself.

In Obama’s America, progressives dared to hope that electing an African-American president was the first step in a reconciliation between black and white. Sadly, in some areas, it seemed to have done the opposite, pushing the divisiveness to a level unseen in decades; any criticism of him tended to be, or was perceived as, racially-biased.

It’s not surprising, then, that Jordan Peele’s ‘Get Out’ was released in the aftermath of Obama: It’s a movie that expresses the suspicion of, and anxiety borne from, an era promoted as being more equal, more pro-African-American, but which veiled a harsher reality. It dares to suggest that both black and white wear masks of tolerance.

The picture revolves around Rose bringing Chris home to meet her parents for the first time. He’s a little bit anxious about the encounter, as one might expect. Except that there’s more to it than just wanting to make a good first impression: Rose hasn’t told her parents that Chris is black; he worries that it might factor in their acceptance.

He’s in for quite the surprise.

Warning: If you haven’t yet seen ‘Get Out’, stop reading now. Find it and see it first – there’s no way to discuss this picture without spoiling some surprises. Avoid articles about it, ads and trailers: this is a movie you’ll want to see cold, if you’re able to. Let it surprise you. Let it shock you. Let it scare you. Then let it sit for a little while longer.

See you on the other side.

Though, on a surface level, ‘Get Out’ is a horror film, on a deeper level it’s about political correctness: it accuses the PC movement of hypocrisy, of being trendy. In fact, Chris’ best friend, Rod, strongly supports -and reinforces- the notion that racism surrounds them. In his mind, everything that Chris experiences serves as a warning.

As someone who isn’t on the receiving end of any significant racism, I have no idea if this speaks to a truth of not. It feels true, however: I’m sure that some amount of racism is deeply ingrained and that a certain amount of political correctness is for show. Having said that, I also believe that much of it is earnest and well-intentioned.

So the picture is horrifying to me on two levels: 1) because I empathize with Chris, who’s stuck in a creepy and dire situation, and 2) because the notion that some sort of insidious placation of black people could hold some truth to it. Chills. Add to this its ‘Invasion of the Body Snatchers‘ quality and it’s a genuinely troubling picture to me.

The idea that people would hide deeply-seated prejudice below the surface, invisible to the naked eye, working to further those views, chills me to the bone. Almost nothing makes me feel more ill-at-ease than racial and/or religious intolerance. In ‘Get Out’, it’s not so much hatred as it is envy, but it still manifests itself as prejudice.

I’ve long said that I’m chiefly intolerant to intolerance (including my own); I can’t bear the ignorance and hatred that are usually the roots of isms. It scares me to think that we’ve been dumbing ourselves down and closing our hearts; but, based on recent events, it’s clear that we have. That’s why this picture punched me in the gut.

Honestly, when I first heard En Vogue’s powerful “Free Your Mind”, I never imagined that, 25 years later, prejudice would be alive and well.

‘Get Out’ has another layer buried beneath this: it’s also about the masks that we wear to function in society. We’re conditioned from a very young age to behave “appropriately” in various social contexts; this varies depending on the circumstances and the people we’re interacting with. It’s not how we are or might wish to behave.

In this picture, almost everyone wears masks: Chris wears a (relatively transparent) mask of politeness when he’s faced with the ignorance of his hosts and their friends, the Armitages and co. wear masks to hide their insidiousness (though Jeremy can barely keep his on), and the subjects are quite literally wearing masks, inhabiting others.

Though masks can be very useful in society, for us to get along despite our many differences, I sometimes wonder if they don’t also hinder our ability to interact. If we approached each other with honesty and transparency, perhaps a lot of miscommunications would be avoided. Then, again, perhaps a lot of feelings would get hurt.

In ‘Get Out’, the only main character who’s fully transparent is Rod; he tells it like he sees it.

Interestingly, though he doesn’t wear a mask, he’s also prejudiced; he’s convinced that there’s a white conspiracy against blacks (I’d say “persons of colour”, but it’s very much a black and white dynamic here). I’m not saying that he’s right or wrong, I’m just pointing out that his views are tainted by his beliefs, making him prejudiced as well.

What’s interesting is that Jordan Peel used Rod as the comic relief: a paranoid, conspiracy-minded, animated cartoon character who’s initially dismissed but eventually vindicated. I imagine that what we’re supposed to take from this is that similar warnings should be taken more seriously, even if they seem a bit ludicrous to us initially.

My concern is that elevating an irrationally conspiracy-minded character (he was right in this instance, but he frequently illustrates how close to derailing he is) only serves to fuel paranoia. I’m genuinely concerned about the impact a picture like this one can have if it means that black and white start regarding each other with suspicion.

And then on it goes…

On a personal note, the more the pressure builds, the more I feel frozen in my tracks, unable to connect with anyone different from me because I worry that I will say or do something inappropriate. My awkward behaviour will likely be misread as an ism, but it’s really just concern that I’ll upset or hurt someone without meaning to.

It’s digging me a bigger moat.

I feel this way with everyone, irrespective of gender, colour or sexual orientation: I don’t want to be insensitive. I truly want to understand and overcome our differences. However, the concern that is fueled by our pop culture and by our politics (especially in the last year), makes me super self-conscious about my own behaviour.

So does a movie like this one help or harm? I’m really not sure…

Either way, I think that ‘Get Out’ is a near-masterpiece of the horror genre. It truly is an excellent film. Successful horror films tap into our fears and anxieties, giving them a voice. The best of the bunch are also built or layered in such a way as to make you reflect upon it or some of the themes it broaches. ‘Get Out’ does both very well.

Frankly, my only real beefs are in Daniel Kaluuya’s performance, as Chris, and in the characters’ bizarre behaviour.

Don’t get me wrong: Kaluuya certainly does a good job as Chris. But at no point did I believe that Chris was real; it always seemed to me that Kaluuya was performing, going through the motions, not inhabiting the character. Perhaps it’s because Chris is performing, wearing a mask, being a guest, but I saw few -if any- moments of veracity.

As for the behaviour, some of the characters did things that were completely nonsensical and couldn’t be explained away – not even by the big “reveal”. For instance, why in the world did the “gardener” run right at Chris that night? He claimed that he was exercising, but that doesn’t make any sense whatsoever. And yet… Chris just accepts it.

But, those caveats aside, ‘Get Out’ is a remarkable directorial debut by Peele. It’s the nightmarish counterpart to ‘Guess Who’s Coming to Dinner’, crossed as it is with elements of ‘Invasion of the Body Snatchers’ (or ‘The Stepford Wives‘, which was Peele’s inspiration). It’s potent, topical, and generally well-crafted. It’s a must-see.

It’s the defining horror film of our horrifying era.