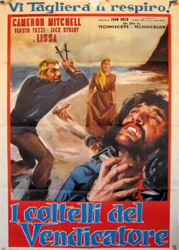 Synopsis: In their third and final collaboration, Cameron Mitchell stars for Mario Bava as a Viking drifter torn between guilt, vengeance and his love for a peasant woman and her young son. Co-written by Bava (as John Hold), the film delivers robust raping and pillaging yet proffers a uniquely humanist approach that virtually re-imagines SHANE as a Viking drama. The result transcends its typically chest thumping genre to emerge as one of Bava’s most emotionally complex and visually compelling films.

eyelights: its cinematography. its basic, but well-conceived plot. its score.
eyesores: its unlikable lead actor.

“I will stay with this strong and noble woman.”

Mario Bava was a miracle worker. A cinematographer and special effects guru, he eventually rose to the top because he saved the day on many productions, anonymously filling in for directors when productions were in trouble.

Released in 1966, the film was falling apart when Bava was brought in to fix it. Legend has it that, in a mere six days, he was able to re-write and shoot it entirely. This time, however, he got the credit that he richly deserved.

It’s not to say that ‘I coltelli del vendicatore’ is a brilliant motion picture; it’s a fairly run-of-the-mill action-adventure picture of the “sword and sandal” variety. But, given its origins, it’s a remarkably accomplished effort.

The story is simple: The villainous Hagen is planning to return with his gang to the village that they were once banished from. His intention is to lay claim to its leadership, given that King Arald has been missing at sea for years.

He also wants to lay claim on his woman, Karin.

But a mysterious drifter named Rurik enters Karin (and her son, Moki)’s life at just the right time: a master knife thrower, he’s able to protect them from any attempt on their dignity and lives. Soon, they function as a family.

However, Rurik keeps a deep, dark secret: he was once the dreaded Helmut, a rival of Arald’s, a man who ransacked their village and even raped Karin. Contrite, he wants to undo the harm he’s done. But he never expected Arald’s return…

What’s really interesting about ‘I coltelli del vendicatore’ is how much it feels like a Western, even though it’s supposed to be a Viking picture. This is largely due to Marcello Giombini’s score, who injects it with cadence and adventure.

Unfortunately, its protagonist isn’t nearly as enticing as classic Western heroes: Cameron Mitchell is gruff and bland, looking like he crawled from under a rock with his ratty facial hair and crap blonde dye job. He inspires indifference.

For all intents and purposes, his performance is perfectly adequate, so it’s unusual how dull he is given the complexity of the character. You’d think that a tortured person like Rurik would generate some sort of strong reaction.

The only time, really, is at the end: you can’t help but feel a bit sad for the guy when he realizes that, though he won both Karin and Moki over, and has redeemed himself, they immediately return their allegiances to Arald when he arrives.

Rurik saves the day but leaves empty-handed, alone, to journey off on his horse.

Karma is a bitch, ain’t it?

Aside for its melodramatic love triangle and backstory, the picture revolves around its frequent fight sequences. Thankfully, the choreography is superior to ‘Ercole al centro della terra‘ and is, in fact, actually pretty darned good.

Of course, one has to overlook the fact that Rurik is superhuman in his prowess, being able to throw a dagger at 100 feet with the utmost accuracy and from an endless supply of knives – but that’s pretty much a cherry on the sundae here.

After all, this is a common trope in cowboy and cop movies.

My only true complaint about the picture is with respect to Luciano Pollentin’s performance as Moki – it’s unbelievably bad, with Pollentin overacting every single scene, line and emotion. Thankfully, he’s only a secondary player here.

But, otherwise, ‘I coltelli del vendicatore’ is a pretty solid effort, and is all the more remarkable given that it was put together in a week. Had it benefited from a more charismatic lead, it might actually have risen in the ranks.

It could have been a minor genre classic.