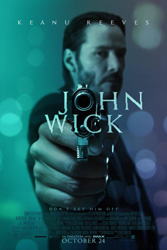 Synopsis: When sadistic young thugs senselessly attack John Wick – a brilliantly lethal ex-assassin – they have no idea that they’ve just awakened the boogeyman. With New York City as his bullet-riddled playground, Wick embarks on a merciless rampage, hunting down his adversaries with the skill and ruthlessness that made him an underworld legend.

eyelights: its stylishness.
eyesores: its vacuousness.

“You stole my car. You killed my dog.”

I dislike Keanu Reeves intensely. I’ve never much liked him as an actor, but his woodenness (I got into the habit of calling him “canoe”) has ruined too many movies for me to tolerate him. I think his performances in ‘Much Ado About Nothing’ was the last straw for me – and that was over two decades ago!

As one of my most reviled performers ever, it goes without saying that I steer clear of any movie he’s in (nothing against the man, actually, as he seems nice and genuine; it’s his skill that I can’t endure). So there was no chance in hell I’d watch an action vehicle called ‘John Wick’ when it came out.

But, ever since its release in 2014, I didn’t stop hearing only good things about it. The fact that it got a sequel, despite being only a mild success, speaks to the enthusiasm of its fans and it suggested that it might actually be worth seeing. So I took it upon myself to request it from my local library.

I almost didn’t complete it.

‘John Wick’ isn’t a bad movie, per se, not for what it is: a nearly-plotless action film. It follows its titular character, a former hitman, as he seeks revenge on a few Russian hoods who beat him up, stole his car and murdered his dog. Over the course of a few days, he litters the streets with bodies.

Make no mistake: he gets revenge.

The reason I almost didn’t complete it is because it felt all too familiar and there really wasn’t much that was fresh here. Plus which it was utterly insipid, focused as it was on style over substance: See Wick’s large, sterile, ordered mansion. Look at his fancy clothes. Watch Wick drive his vintage Mustang.

Then watch him run reckless on a tarmac with his puppy. Forget the fact that the poor puppy must have been whipped about the car and gotten hurt: Wick is cool driving like a stupid @$$.

Forget the fact that Wick gets beaten to a pulp by the hoods with an aluminum baseball bat; he’s made of steel and a bash to the noggin’ or to the ribs doesn’t break anything. In fact, it tickles.

But everyone in this movie suffers serious injuries and keeps ticking. A torn muscle can be shrugged off. A broken bone can be ignored. Pain is easily winced away. They regenerate quickly.

They’re like video game characters – all that’s missing is a life meter: I could almost see the meter refill at the end of each combat. Oh, a new level, everything is peachy keen again! Fight, fight!

The picture is really just a string of fight scenes tied together in a semi-seamless fashion. They’re well-choreographed, and they’re not boring, though they’re not original either. There are plenty of targets, plenty of bullets, lots of blood and mounds of bodies. It’s everything you could ask for.

But it left me wondering… where are the cops?

I understand that Wick has enough of a reputation that local cops cut him some slack. I understand that his opponents are an extremely wealthy and powerful crime syndicate. But ceaseless gunfights will draw attention – especially in public and in broad daily. Surely someone would call the cops, right?

For a movie with so little plot, it makes very little sense. And that’s why I almost quit it. But then I had already written a bunch of notes and I figured that they’d go to waste if I cancelled the viewing. I decided that it might be worth blogging about it. And it sort of is, if only to offer words of caution.

If you want a movie to check out on, to not think through, ‘John Wick’ will do the trick.

If you want a movie that’s unrelentless, that’s paced to dull the senses, ‘John Wick’ will do.

If you want something loud to keep you awake, and annoy the neighbours, ‘John Wick will do.

But that’s about all that ‘John Wick’ can offer. Beyond that are the silliest character motivations, uninspiring dialogues, and a lack of depth. Non-stop violence may excite some but it doesn’t stimulate me. And if I want to see a good revenge movie, I can watch ‘The Crow‘ or even ‘Darkman‘.

If I want a gritty action picture that’s set in the criminal underworld, I can always watch ‘Payback‘; now that‘s satisfying. John Wick brings nothing to the table that others haven’t already, and better. Okay, the picture looks great, what with its nice photography, flashy vehicles and lavish locations.

But it’s not called ‘John Slick’, is it?