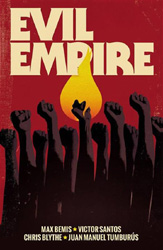 Summary: How could we actually end up in a jacked up dystopian future…starting from exactly where you are, right now?

The country is torn apart in a debate over the meaning of right and wrong, and Reese Greenwood is not about to stand by as the American people support the rantings of a mad man. But how far will people go to take a stand for what they believe in? Told through the perspective of an underground rapper with a political bone to pick, Max Bemis’ gripping story explores a scenario in which we watch modern society gradually evolve into an evil empire.

Volume one of ‘Evil Empire’ left me skeptical due to its political views. Volume two left me infuriated due to its irresponsible content. The third and final volume, however, is just a big mishmash of nonsense that mostly left me indifferent.

Though it continues and concludes the battle between Sam Dugging and Reese Greenwood, its opening salvo is the story of a musical artist who did everything to buck trends, only to end up being at the forefront of them each time.

Bored with his success and the excesses that come with it, he winds up slaughtering his band members in front of a worldwide live audience the night of Sam’s electoral win. Then he decides that his next move will be to write a comic.

It’s such masturbatory BS, in light of the fact that Bemis is also a musical artist, so it’s easy to imagine parallels. And what does it add to the series’ story arc, anyway? Nothing. It literally gives us nothing aside for a decadent fantasy.

Well, at least it’s not as vile as the opening issue of volume two.

The rest of the book finds Reese on the run, the resistance reduced to her and three mates. Somehow, the Evil Empire has swept the globe. Yep. Just like that. There is no voice of reason other than Reese and company. People dig EE.

Let’s be honest: unless you’re a teenager or a rolling stone, the whole Evil Empire credo is too destabilizing – anyone who cares about anyone else would feel deeply insecure (ex: parents would constantly worry about their children, ..etc.).

It’s a model that just doesn’t work as a long-term vision.

So, yeah, the Evil Empire couldn’t possibly sweep the planet. It could only be a by-product of a frustrated culture – which, though it may very well be a reality in some countries (like the United States), is certainly not a universal sentiment.

And the whole resolution is pure BS, dumbed down crap that’s absolutely not credible in any way. If anything, it looked more like a last-minute effort to wrap things up (was this supposed to a longer series that was unexpectedly abbreviated)?

Seriously, I already had an issue (!) with the fact that Reese had Sam in her grasp and let him go in the previous volume. Here, his demise is mishandled completely, with Theo giving him way too much leeway instead of just finishing him off.

And then they let his sister, partner and co-conspirator, Julia free to carry on!!!

And then we fast forward 25 years where Reese and co. make a deal with her to finally end it?

It’s as easy as that? Really?

Bemis’ rationalizations and political views were naïve to me; I just couldn’t wrap my mind around his hopelessly simplistic views of human nature. So there was no way I would buy his justifications for wrapping the story so abruptly.

On top of that, the art is actually worse – a far cry from the already imperfect work of the first few issues. Not only does it lack precision now, but the storytelling is utterly inadequate. Combined with a rushed finale, it was nearly incoherent.

And, ultimately, Bemis never explains why it’s our fault, as he stated so forcefully right at the onset of the series. You can’t tell readers that this dystopian future is their fault and then not articulate why that is. That’s rude and ignorant.

It just is. Because Bemis says so.

Sheesh… to think that finding out why was the only reason to carry on.

What a downward end to this series, which already was off to a rocky start with its lack of depth and garbled motivations. It just kept digging itself a deeper hole as it carried on, leaving us no other choice than to pour the dirt over it.