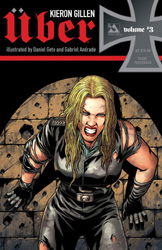 Synopsis: The horrors of enhanced soldier war have taken a dire turn for the Allies.  Their attempts to develop a counter to the German Battleship Ubers have led to a crossroads in development.  But the discovery that the Nazis have not only discovered the same weapons but have improved upon them leaves a terrible hole in their ability to mount a defense.  With both sides suffering herculean losses and the devastation of world war decimating every nation, the escalation of super human combat is making the Allies desperate for foothold.  Kieron Gillen (Journey into Mystery) has created a unique and terrifying mix of the fantastic and the horrible that will leave you speechless in the blood soaked pages of Uber.  The horrors of super human warfare are immeasurable.  This volume collects issues #12 – 17 of the ongoing Uber comic book series.

Über is turning into a bit of a soap opera. Though on a surface level it’s supposed to explore the impact that superbeings would have had on the Second World War, it goes on so many tangents that it’s hard to keep up with all of the characters.

I can’t imagine being the type of comic book fan who buys individual issues; the story shifts dramatically from one book to the next, often ignoring past cliffhangers for more than one issue before getting back to it. It must be frustrating as hell.

For instance, the death of Hitler at the hand of Siegmund is only resolved three issues later. Three. Issues. Later. This is Hitler that we’re talking about: obviously readers are going to want to know what happens next after that stunning twist.

Instead, we explore Stephanie’s backstory, discovering that much of it might be fabricated (so what’s the point?) and we follow a Russian Über who stumbles into the care of a Siberian couple – and how she helps and defends the couple when soldiers arrive.

We do touch base with Sieglinde, to see how she gets back after attacking London, but Gillen introduces yet another character in Vernon, the first African-American Über. It’s only towards the end that he resumes the war with a couple of battles.

Now, I’m not a great fan of war strategy and combat, but I’m more interested in seeing how the events will unfold than about exploring the characters – especially new ones. I’m hoping that there’s some literary relevance to Gillen’s exercise in the end.

It just doesn’t fulfill my needs as a reader.

On the positive front, Caanan White has been jettisoned in favour of Gabriel Andrade for the first half and Daniel Gete for the second half. Though they’re hardly brilliant, it’s a refreshing change from White’s frustratingly inaccurate penciling.

Ultimately, though ‘Über’ hardly appeals to me in a significant way, my curiosity remains; I’m slightly curious to know where it’ll go next. I can’t explain it. Maybe its soap opera quality got its hooks in me. But my patience wears ever thinner, and may wear out.

We’ll see how things go after the next issue.