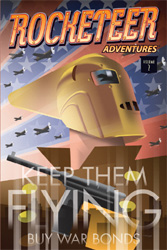 This second volume of ‘Rocketeer Adventures’, which is based on Dave Stevens’ creation, was published by IDW in 2012 and collects issues 5 through 8 of the short stories anthology. It is again written and drawn by a variety of different comic book notables, including Kyle Baker, J Bone and John Byrne.

As with the first volume, the results are a bit mixed. This may be due to the format’s limitation (eight pages per story!), the period (which is pre-WWII) or perhaps even the talent that’s involved. Or it could just be my lack of enthusiasm for the character itself, whom I find okay, but slightly unremarkable.

I any event, I was left indifferent by many of the shorts.

An interesting one is “The Ducketeer”, because it spoofs the Merry Melodies/Looney Tunes of the era, suggesting that Warner Bros. (here Murray Bros.) would have made a silly cartoon duck comedy out of the Rocketeer’s exploits. Sadly, the art is sketchy at best, not really doing justice to the concept.

“Coulda Been…” is another notable one, in that it shows Cliff and Betty visiting a home that he considers getting for them. What great about it, once it gets past their usual shtick, is that it finds them discussing their future together, their dreams, and the sacrifices that they’re willing to make for each other.

The most fun, though, is “Cliff Secord Warlord of Blargon”, which finds the Rocketeer transported to another dimension and defending the weak. Except that this is only his interpretation: we discover early on (via their commentary) that the aliens’ version of the events are completely contrary.

I found it rather funny to see how discrepant his perspective was from their reality, being unable to communicate with them. It makes you look at similar heroic fiction and non-fiction in a different light. And it brings to mind Peter Ustinov’s “Terrorism is the war of the poor, and war is the terrorism of the rich.”

Perception and context can be everything.

With the notable exception of Darwyn Cooke’s covers (in lieu of the near-irreplaceable Alex Ross), the art is often a mild misfire, of variable quality. For instance, in “The Good Guys”, the action is delivered awkwardly, as though the artist (who otherwise was tremendous at detail) didn’t know how to put it on the page.

And it’s not the only instance of this here.

So, ultimately, ‘Rocketeer Adventures, vol. 2’ doesn’t truly take to the sky in the same way that its protagonist does. It also doesn’t quite crash and burn, but it could have been better. I realize that it’s a fairly limiting format, but some of the shorts proved that it is possible to succeed within that framework.

If only there were more of them.