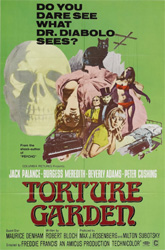 Synopsis: A special sideshow torture exhibit has the power, according to showman Dr. Diablo, to warn people of evil in their futures. As skeptical customers are shown the greed and violence they’re hiding, oneof them snaps and kills Diablo. When they run off, we see the murder to be staged as part of the show. One of the customers has hung around to see this, and wants to make a deal with Diablo, aka the Devil.

Torture Garden. The title alone made me averse to watching it, let alone picking it up. But when I discovered Robert Bloch’s involvement, I decided that it might be worth a look – I am, after all, a huge fan of ‘Psycho‘ and his work on ‘Star Trek’.  So, when I discovered that ‘The House That Dripped Blood‘ was also written by him, I decided that ‘Torture Garden’ was next.

Released in 1967, the 93-minute portmenteau (or anthology) film features four short stories and a wraparound story. It is one of handful of similar films that Amicus Productions released between 1965 and 1975, including the afore-mentioned ‘The House That Dripped Blood’ as well as the EC Comics-inspired ‘Tales from the Crypt‘ and ‘Vault of Horror‘, amongst others.

The wrap-around story is a simple concept: set at a fairground, it finds a small group of people visiting Torture Garden, a sideshow that features morbid displays. Then the barker, who calls himself Dr. Diabolo, leads the curious to a man sitting in an electric chair. Naturally, he proceeds to pulling the switch, leaving most of the onlookers aghast. Most, but not all.

Some are discreetly delighted by the display.

After revealing the trickery behind the electric chair, Diabolo offers to take them behind the curtains to the “real” torture garden – for an extra fee, but with a money back guarantee. Many join him and  he reveals to them a wax statue of Atropos, whom he claims can tap into the evil inside them. All they have to do is to focus their gaze on Atropos’ shears of fate.

1. A middle-aged man arrives at his ailing uncle’s place, hoping to score some money, maybe even a part of his inheritance. His uncle claims that he has nothing, though it’s understood that he’s been paying everything with gold coins. In a vain attempt to coerce his uncle to reveal his secret, he prevents him from taking his heart medicine – which inevitably kills the old man.

After the authorities have taken care of the matter, the man goes through the whole house looking for the money. He eventually finds a trap under the bed. Beyond it: a hidden basement. In it he finds a casket with a skeleton and a live black cat. The cat telepathically tells him that he’s now its servant, that he will have to murder to feed it. His reward: a small chest of gold coins.

And so he begins to kill, driven by the cat’s psychic torture.

This one was effective because his conversations with the cat actually made sense – he wasn’t just thinking out loud. And then the rest took place in his mind. It’s not especially scary, but it’s probably on par with some of Poe’s creations. 7.5

2. A jealous American actress ruins her roommate’s dress to prevent her from meeting with an important producer – then takes her place. They go to a fancy restaurant, and meet with two other producers. After
her date leaves in anger over a deal gone wrong, she lands a part with the other two producers.

But she begins to notice some strange behaviour, such as ominous glances between the two men, or the fact that neither eat. Then comes an incident, in which one of them is shot in the head, but is miraculously saved in a special sanitarium. And so she does research and discovers the terrible truth about the two!

This one was a terrific story, but it wasn’t at all scary – it was merely creepy. And it was marred by a cheap-@$$ production that made the effects look cheap. 7.25

3. The actress’ cousin goes to interview a concert pianist. He shows her his beloved piano Euterpe, named after the Greek Muse of music. They hit it off and start going out. Though he claims to being happy for the first time in his life, this has a terrible impact on the man, who no longer practices as much as he once did – to the dismay of his manager.

I like the idea that a person might be intrinsically connected to an object, like a haunted house, and that this object may react to its owner’s fate or even try to control him/her. But a piano? I found that a bit hoaky, and it left me incredulous. It probably looked good on paper, given that it’s more psychological, but it didn’t work well on the screen. 7.0

4. After one of the patrons eschews the shears, an eager one steps forward, saying that he always wanted to try. In his vision, he’s looking to purchase some of Edgar Allen Poe’s works from a collector, but the latter won’t part with it. Still, the collector invites the man to the United States, to his home, to see his complete collection.

During his visit, the two men geek out over Poe and, after a few drinks, the collector shows the other man his secret collection. Hidden in a secret room lays untold Edgar Allen Poe treasures – and the mystery of Poe’s death. Naturally, the man is ever more intent on buying this collection… but it won’t turn out how he’d hoped.

This is probably the best story of the lot, if only because of its twist, but it’s marred by an appalling performance by Jack Palance as the buyer, basically stinking up the screen the whole time. At least he’s countered by Peter Cushing as the collector, but even his presence can’t overcome Palance’s cartoonish turn. 7.5

Though I find the premise of “shears of fate” a bit silly (one has to be familiar with Greek mythology to appreciate/accept this concept), I found Burgess Meredith a total hoot in the part of Dr. Diabolo. With his constant costume changes and superb performance, he made that part work – despite a cheap finale. To me, Meredith was the best part of the picture.

And while the shorts themselves were a mixed bag, anthologies usually always suffer from this problem – so it’s easily forgiven. I’d defy those who feel that this is the weakest of the Amicus productions to find a comparably memorable master of ceremonies in the other entries. Personally, I had fun watching this. It could be better, but the same can be said for all of them.

Watching this was hardly torture.