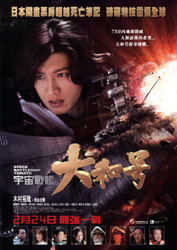 Synopsis: A cult classic from the glory days of anime blazes to life on the big screen in this feature-length Sci-Fi epic starring Takuya Kimura (Redline, Howl’s Moving Castle)~ The year is 2199. Mankind teeters on the brink of extinction as the Gamilas, a heinous race of alien invaders, wage an endless war for the right to inhabit the Earth. The last hope for humanity lies on the distant planet of Iskandar, and the only battleship capable of attempting the journey is the legendary Yamato. Armed with the devastatingly powerful Wave Motion Gun, grizzled Captain Okita and the Yamato’s crew venture boldly into the darkest depths of space. The Gamilas attack at every turn, but fallen hero Susumu Kodai and ace pilot Yuki Mori fight side by side for the future of their world. Together, these young lovers unlock the secrets of Iskandar – only to face a harrowing voyage home that will change their world forever!

eyelight: its zeal. its score.
eyesores: its trite script. its low-budget CGI.

I’ve never watched ‘Uchu Senkan Yamato’, the 1974 anime that ‘Space Battleship Yamato’ is based on. In fact, I don’t recall having ever heard of it before, despite its popularity (there are countless series, spin-offs and motion pictures!). But I had seen this 2010 live-action film around in local stores.

…and promptly dismissed it; it just seemed like run-of-the-mill, B-grade, stuff.

But two of my closest friends had other ideas in mind: both bought it for me at for my 2015 birthday. One found it cool-looking, being a Japanese sci-fi movie based on an anime, and the other gave it to me with a bit of a wink, maybe in jest. Clearly, there was no escaping ‘Space Battleship Yamato’.

The picture is set in the late 21st century. Earth is devastated by radioactivity and humanity lives underground. Under constant attack from an alien race called the Gamilas, humanity is on the brink of extinction. And so they send Space Battleship Yamato, their last hope, to Iskandar for help.

Naturally, there will be many hurdles along the way, no thanks to the Gamilas.

The picture started off on a really bad note, with a starship battle near Earth: given the budget, the picture was made with as few practical effects and real sets as possible, so the combat was all CGI. But cheap CGI looks like crap, and so it looked like we were watching a video game with actors in it.

The next awesome scene of badness was when Susumu, who we would discover is our lead, goes above ground to scavenge for anything valuable. Given the radiation level, he’s wearing a respirator. But an enemy projectile conveniently lands right near him and actually blows the mask right off his face!!!

Unharmed by the radiation or the impact of the missile, he takes the shell back to a military base somewhere, somehow, where he is allowed entry despite his high radiation level – levels high enough that the medical officer won’t let him wander about the halls, for fear that he might make everyone else sick.

Naturally, he still comes and goes as he pleases.

This shell sets in motion humanity’s last attempt at survival, and Susumu applies for a position on the Yamato. Of course, he gets in (of course!), becomes their main navigator, as well as their gunner – even though he has no training and there would surely be some capable and proven pilots on hand for the job.

The picture is just a string of ridiculous and clichéd moments, as though the filmmakers had watched all the junk Hollywood action films that they could get their hands on, put to paper all of their common elements, tossed them in a blender and hit frappé. It’s all familiar, and it’s devoid of any soul.

The whole picture devolves into a ludicrous combat on Iskandar, the kind of large-scale stupidity that you get from watching ‘Aliens‘ and all its derivatives far too often and not understanding their subtleties. Watching two of the crew shooting at their aggressors double-handed, with no cover whatsoever hurt.

Heck, even the dialogues were moronic, trite, telegraphed – all garbage that’s been done before, but better, like bad paint-by-numbers. Did we need to hear a pretentious and cheesy ‘Independence Day’-style speech by Susumu before the crew went on their mission on Iskandar? Um, no.

Was it purposely ironic, or just dumb?

The only things that I thought stood out from anything else were the Yamato itself, which looks like a cross of a WWII battleship and a spaceship, the crew’s leatherette biker-style jackets, and the motion picture score, which was epic, and earnest – so much so that it almost lent the picture credibility.

Look, ‘Space Battleship Yamato’ isn’t boring, it’s not unentertaining. But it’s junk food: it’s akin to one of those puny, thin McDonald’s cheeseburgers versus a gourmet burger that was freshly-made. You know, it fills a hunger gap, but it lacks all substance – and you’d be hard-pressed to call it quality stuff.

Switch off your brain to enjoy!