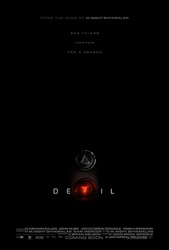 Trapped in an elevator high above Philadelphia, five people discover that the Devil is among them – and no one can escape their fate. This chilling, supernatural thriller from M. Night Shyamalan (The Sixth Sense, Signs) will keep you on the edge of your seat all the way to a heart-stopping ending with a truly wicked twist.

“You must consider that one of these people might be the Devil.”

It’s called ‘Devil’. It’s set in an elevator, of all places. And it’s from a story by executive producer M. Night Shyamalan. Though I’m a fan of his, I was extremely skeptical about the quality of such a movie – especially since Shyamalan was on a cold streak in 2010 that lasted for a few years more.

But the reviews I read were generally pretty decent. Not great, but decent.

So I eventually relented – largely because of ‘The Visit‘.

There’s really not much to ‘Devil’: Five people take an elevator together in a Philadelphia high-rise. Halfway up, the elevator stalls. It’s not and out-of-the-ordinary experience, but its passengers are soon at odds. And they start to die, one by one – ghastly deaths that are mighty suspicious.

Meanwhile, a police officer has been called to the scene of an accident a couple of blocks away: A man has fallen from an inexplicable height, which he traces back to the same tower as the elevator. There he finds a suicide note, and a jittery security crew, who have been monitoring the elevator by CCTV.

And they know something’s not quite right.

The reason why the picture is called ‘Devil’ is due to the fact that it’s rooted in an old legend that says that the Devil walks amongst the living to tempt us. Due to a growing number of unusual occurrences, including the strange death in the elevator, one of the guards is convinced that the Devil is present.

The picture is also loosely inspired by Agatha Christie’s 1939 novel ‘And Then There Were None’, which has been adapted on screen very successfully in the past. Though it traps its victims in an elevator, limiting its options, “Devil’ makes things interesting by following the characters outside the elevator too.

It’s what makes ‘Devil’ work; it helps change things up.

So the picture spends half of its time with the people trapped in the elevator, building up tension between them, and then it  follows the cop’s investigation, the security guards’ panicked observations, and also the building’s handyman, as he tries to figure out how to unjam the elevator. It’s a fairly dynamic mix.

The cast is pretty good, though it’s unremarkable; some may be familiar to the more cinephiliac audiences, but, for the most part, they’re unrecognizable. There’s also no true stand out performances, which may be the film’s biggest weak spot; what we get is fairly typical of the genre – no more, no less.

There are some pretty neat moments along the way, which should remain unrevealed as the film has only a few tricks up its sleeve – but the opening shot of the city, which is all upside down, was a nice touch. And I really liked the way they constructed the suicide, as well as the cop’s deconstruction.

Ultimately, ‘Devil’ isn’t a sophisticated or especially original supernatural suspense film. But, in a middling genre, it’s a  fairly decent mass market entry. Granted, none of the characters are engaging, and it’s a one-trick pony, but it packs enough punch for its limited run time that it’s well worth seeing.

But I’d avoid elevators for a few days afterwards.