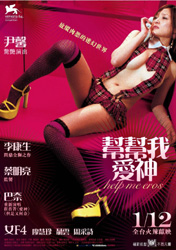 Ah Jie lost everything in the stock due to a severe economic crisis. He spends his days in his sealed apartment, smoking joints and looking after the marijuana plants that he secretly grows in his wardrobe. In desperation, he calls a suicide helpline and gets to know Chyi, whose sweet and gentle voice causes him to fall in love with his fantasized image of her. He tries to ask her out but is repeatedly rejected. He begins projecting his fantasy of Chyi on Shin, the new girl working at the betel nut stall downstairs. Shin is always sexily dressed in order to lure male customers. He becomes closer to her and soon the two of them sink into a world of erotic and psychedelic pleasures… At the same time, Ahe Jie begins to stalk Chyi…

eyelights: the betel nut beauties. the sexy bits. the quirky humour. the cinematography,
eyesores: the script’s many assumptions.

‘Bang bang wo ai shen’ is a Taiwanese motion picture from 2007 and it follows Jie, a depressed man who spends his days watching cooking shows, smoking his home-grown weed, and calling the suicide helpline. It concurrently follows Shin, who has come to Kaohsiung for work and winds up a betel nut beauty, and Chyi, the suicide hotline worker that Jie calls daily.

While it deals with a down-and-out protagonist, the picture is an appealing mix of drama, quirky humour, eroticism and psychedelic haze. It is surprisingly entertaining even though the core of the picture is that Jie is struggling not just to make ends meet (he’s slowly selling everything to pay his bills and his utilities get shut down) but to even stay alive.

What helps is the fact that the picture also spent time with other characters, because it lifts the pall surrounding Jie. While Chyi’s life isn’t especially uplifting, it was peculiar enough that it peppered the proceedings. As for Shin, well, her life is nothing exciting or glamourous, but the conspicuous sexiness of the betel nut beauties was pure delight.

Eventually, Jie and Shin’s lives cross paths when he helps her unjam her scooter from a row of other bikes and he asks her to give him a lift in return. He proceeds to steal his old vehicle back from a used car lot and takes her with him for a joyride, during which she hangs out of the sunroof and prods him to drive down the neoned Kaohsiung streets at high speeds.

They later go back to his home and have sex. Lots of sex. Acrobatic sex.

This last fantasy was particularly tantalizing because it found Jie blowing marijuana smoke through the phone to his fantasy Chyi and the two of them losing themselves in a haze. He then conflated Chyi and Shin, by imagining her fantasy self joining the other betel nut beauties in parading for his mind’s eye. It was far sexier than the more graphic sex scenes.

Which I also enjoyed, I must add.

In any event, Chyi’s life is nothing like the one that Jie imagines. She’s a dumpy, unhappy girl who is married to a television cooking show host who ignores her to spend time with his buddy – a buddy who stays for days and with whom he plays pool. Without pants on. It’s pretty suspicious. But she ignores his unusual behaviour, like filling their bathtub with eels.

I really liked this sort of absurdist quality of the picture, which was best expressed in Chyi’s life; it added a layer of humour that played well in contrast with the dourness of the characters’ existence. I also liked the film’s inspired cinematography and direction, which added a layer of artistry and showmanship to the film which I felt was rather compelling at times.

Still, despite the opacity of the script, ‘Bang bang wo ai shen’ is fairly enjoyable foray into a Taiwanese (sub)culture that isn’t especially well-known here in North America. The picture’s creative vision combined with its quirky and sexy bits make for a mildly compelling watch, even as it tackles personal hardships that one wouldn’t typically find entertaining.

It’s worth a look. Maybe even two.