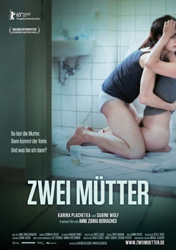 Synopsis: Brazen, timely and heart-wrenching, Two Mothers is an intense exploration of the trials and tribulations a same sex couple encounters in their desire to become loving parents. Katja and Isabella are happily married and feel the time is right to have a child. As the weeks and months pass by, it becomes clear that the process will be far more fraught than either were prepared for- and even threaten their relationship in unexpected ways. Brilliantly honest and surprisingly stirring, Two Mothers is unmissable drama.

eyelights: the performances. its documentary quality. the sexy bits.
eyesores: its grim realism.

Getting pregnant is often taken for granted. Even though it’s not 100% guaranteed (something the accidental pregnancy rate in teenagers seems to belie), it’s often assumed that heterosexual couples will one day want and try to have children.

In fact, it’s often viewed as “the next step”, or even the raison d’être of a couple – and not trying is frequently frowned upon or looked down on with condescension. So there’s a lot of pressure for couples to just go ahead and do it.

But it’s not always that easy. I’ve known heterosexual couples who’ve wanted children and couldn’t or had the worst time even managing to get pregnant. It can be a real strain on their relationship, between the drawn out efforts and stress.

And yet they’re the minority.

A majority of gay couples who want children have trouble getting pregnant. The fact that they can’t do it by themselves is already a major hurdle psychically, but they often have to overcome societal barriers from their community and governments.

It can be a journey full of emotional hardship.

Anne Zohra Berrached’s ‘Zwei Mütter’ recounts one such journey: Katja and Isabelle are ready to discuss having children, considering babies’ names, talking about a lesbian friend of theirs who was once married, and even wondering about sperm donors.

But it won’t be as easy as that.

Based on true-life experiences, this 2013 German film shows all the troubles that German lesbians can have trying to get pregnant: after making dozens of phone calls, Isabella discovers that the laws are inconsistent from region to region.

The couple persists and find two doctors that would work with them. But, first they have to meet with their lawyers to prove that they’re financially capable of raising children – something that hetero couples would never have to do.

When they finally find a doctor who will work with them, they realize that it’s not a simple matter: 9 months later, after 11 failed inseminations, they are financially strained: Katja has to work extra hours at the video store to make ends meet.

Isabella decides to try to find alternative ways: first with a syringe, then using a pregnancy kit designed by a sketchy entrepreneur who works from home yet claims thousands of successes. Katja wants to take a break, but Isabella won’t quit.

Endless rendez-vous with sperm donors, many failed inseminations and many months later, they finally get pregnant.

Unfortunately, by then the couple has been pulled apart by Isabella’s one-track mind, never minding Katja’s feelings and concerns. Even worse, she has allowed the donor to be involved in the process; Katja feels cast aside, a third wheel.

Can they survive this?

Frankly, I found ‘Zwei Mütter’ extremely realistic, thanks to the solid performances by Karina Plachetka and Sabine Wolf, but also by the script, which lays it all out unvarnished. The fact that it’s shot handheld, documentary-style also helped.

I really felt for Katja, who we saw gradually pull away, shut out by Isabella, yet trying to hang on. Wolf showed the concern, disappointment and then disconnect in her eyes so well; it was sad to see their once-close bond being frayed before our eyes.

Their closeness had been so well established by Berrached, what with their loving embraces (during and post-lovemaking) and in their general interactions, as they went through their daily travails; watching them grow apart made me wonder if it was worth it.

For some, it really is: Sometimes these relationships repair themselves with time, especially after the fruits of their labours become self-evident. But it’s not always the case. Sometimes there’s no going back; the price that was paid is too high.

‘Zwei Mütter’ gives us a sober look at the difficulties with getting pregnant when biology isn’t on your side. It’s true for hetero and homosexual couples alike, but the picture makes its point that there’s no reason to make it more complicated.

And based only on sexual orientation.

Thankfully, things are changing. If ever slowly.