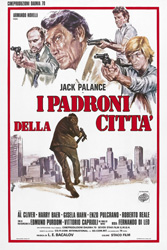 Synopsis: Tony, a mob loan collector, is dissatisfied with his station in life. Though he dreams of one day being rich, he is stuck with the dead-end job of beating up borrowers who fall behind in their payments. After meeting up with Napoli, another mob enr who’s just been fired from his job, the two hatch a plan. Together, they will con mob boss Manzariout of a fortune, after which they can retire and live in luxury. Manzari, however, is not about to let them go so easily.

‘I padroni della città’ is a 1976 motion picture by famed poliziottesco director Fernando Di Leo. It follows an eager young loan collector for the mob as he attempt to devise schemes to make more money – and the dire consequences of one such scheme.

Interestingly, this picture is included in the boxed set for Di Leo’s so-called ‘Milieu trilogy’, even though it has no connection with them, and even though Di Leo made five movies since 1973’s ‘Il boss‘, the final part of that trilogy (yes, FIVE movies in four years!).

I’m not sure why it was selected (perhaps due to Jack Palance’s contribution as one of the mob bosses?), but it wasn’t exactly my favourite of the lot: the criminals here are more low level street thugs than the seasoned mob criminals we’re used to seeing.

Our protagonist, Tony, for instance, is just some pretty young thing in jeans and a t-shirt, driving around in his sports car and desperately looking for an opportunity to strike it rich. Sure, he’s quite the pugilist, and even does a little bit of martial arts. But… so what?

Basically, the first part of the picture consists of watching him make collections for Luigi, a local crime boss, and then hanging out at pool halls and gambling joints in the hope of making a connection. Like Tony, it feels a bit listless, even as it sets things up.

The picture heats up when a crime boss nicknamed Scarface walks into Luigi’s gambling hall for a quick game. Scarface loses 3 million liras, and pays with a cheque, a serious affront. But no one dares to confront him – except Tony, who  volunteers to go collect.

He comes up with a scheme for he and his buddy Ric to portray themselves as tax collectors. He takes 10 million and keeps 7. Tony thinks he’ll be able to repeat this scam at a few other places, but reprisals are immediate as Luigi and his crew are blamed for the heist.

After Luigi is murdered, Scarface’s hoods make a list of all of Tony’s friends, threatening to get all of them. So Ric plans a fake drug deal with Scarface and sets up the exchange at a deserted old slaughterhouse, with the intention of taking him out in the process.

The finale is the most disappointing part of the picture: Firstly, it made no sense that Scarface would have made the deal himself. Secondly, our protagonists are only three and they never got hit, no matter how little cover they had. Thirdly, it felt anticlimactic in that setting.

There are a few things that I did like about the picture, however:

Ultimately, though, even though those are the only truly notable aspects of the picture for me, I thought that ‘I padroni della città’ was enjoyable enough; it passes he time well. But it didn’t “wow” me like ‘La mala ordina‘ did, and it’s my least favourite so far.

Still it’s good, and I would certainly like to see more Di Leo in the future.