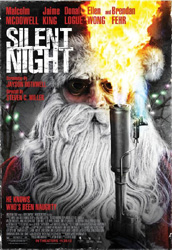 Synopsis: He knows who’s been naughty

In 1984, the slasher classic Silent Night, Deadly Night stunned audiences, was banned across America, and remains the most notorious Christmas movie in history. Now, Santa is back, and he’s got a brand new bag of tricks. As their small Midwestern town prepares for its annual Christmas Eve parade, Sheriff (Malcolm McDowell of Halloween) and his deputy (Jaime King of My Bloody Valentine 3D and Hart Of Dixie) discover that a maniac in a Santa suit is murdering those he judges as “naughty.” Their sins? Porn, adultery, greed… And he will make sure they rest in heavenly pieces. Donal Logue (Shark Night 3D), Ellen Wong (Scott Pilgram Vs. The World), Lisa Marie (The Lords Of Salem), and Brendan Fehr (CSI: Miami) co-star in this brutal and darkly humorous tale of Christmas gone bad.

It’s 2012, and you want to make a movie. Christoncrutches, everything’s been done before! So what can you do? If you try anything at all it will be compared to something else – in all likelihood unfavourably. Heck, you might even be sued for copyright infringement. !@#$ that. But you really want to make a movie.

The answer: remake/reboot/rehash/revive/reimagine a previous property.

You can’t touch the classics without getting your @$$ handed to you in a hat (remaking ‘Memento’…? F-ing stupid idea!), but redoing a non-classic is an exercise in futility – no one’s going to care, especially not the financiers. So you might as well look for a genre classic that no else has already given a facelift to. So you start digging…

And come up with ‘Silent Night, Deadly Night‘, the non-classic that keeps ticking and keeps on giving! After all, the damned series has five installments, a couple of which are notorious (the first for its basic conceit, the other for being hilarious horrible). And it’s set at Christmas, so it has a modicum of replay value! Score!

Thus we have ‘Silent Night’, a new take on an old non-classic.

This version of the festive treat is a very different beast than its predecessor: it takes the basic conceit of a psychotic killer dressed in a Santa Claus costume and ramps it up for modern audiences. It’s grittier, gorier, and more intense. People like that. Throw in a few actors whose names and/or faces are familiar and you’ve got a remake.

This time, our protagonist isn’t the villain. Instead of trying to sympathize with poor Billy, this time the picture follows Aubrey, a small-time cop who’s been called in to work on Christmas Eve when one of her colleagues skips town with a lady friend. Despite her request to stay put due to some past history, the Police Chief drags her in.

Soon she finds herself on the trail of a psychotic killer who is butchering some of the town’s folk. In a Santa costume. On the day of the town’s Christmas parade. Her day is spent following one lead after the next, one trail of blood after the other, in the hope that she can stop the mysterious killer dead in his tracks.

Frankly, I thought that ‘Silent Night’ was better than all of its predecessors. While the original had some interesting elements, it certainly wasn’t a good movie by any standard. ‘Silent Night’, in comparison, is a better movie. It’s not a great one (it’s really just a slasher-type film wrapped up in tinsel), but it’s certainly better.

For starters, I enjoyed the main cast: Jaime King was credible as Aubrey, Malcolm MacDowell was the perfect prick as her boss, Ellen Wong was ever-so-delightful, and Donal Logue was excellent as one of the suspects. It even features the delicious Lisa Marie (once Tim Burton’s partner and muse) in a small role. Oh joy!

Secondly, I liked that it took itself somewhat seriously, without being too serious. It wasn’t a spoof or camp, but it wasn’t grim like a Rob Zombie movie either. The kills themselves were indicative of this balance in that they used a number of slightly unusual -if not somewhat discrepant- methods to off Santa’s victims.

Including a rehash of the infamous antlers scene.

I rather liked that all of the worst performances in the picture also guaranteed that those characters would be victims. I don’t know if it was intentional or not, but it was certainly fitting. And satisfying. I just sat there watching these people ham it up, wishing they would die to relieve me of my agony – and they did.

But the film feels like a paint-by-numbers slasher in many ways and that was sort of boring. As is the case in those films, the killer just appears and disappears at will and it’s impossible to track him/her/it down. So, basically, although we’re watching Aubrey try to piece it together, we know it’s just filler until the killer kills again.

There were also a few bits of nonsense:

Still, ‘Silent Night’ has its moments, including some rather memorable ones: Santa dispatching a nasty spoiled brat (kids, better be good!), spares a bystander after taking care of his intended target, and the nod to ‘Silent Night, Deadly Night 2’s “garbage day”. It’s hardly a masterpiece, but it does what it intends to do relatively well.

Santa Claus is comin’ to town!