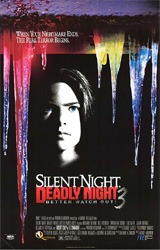 Synopsis: Ricky Caldwell, the notorious ‘Killer Santa Claus,’ awakens from a six year coma after being kept alive on life-support by a slightly crazed doctor experimenting with ESP and other special abilities. Ricky targets a young, clairvoyant blind woman, named Laura, whom is traveling with her brother Chris, and his girlfriend Jerri to their grandmother’s house for Christmas Eve, and Ricky decides to go after her, leaving a trail of dead bodies in his wake.

eyelights: the cute girls.
eyesores: its contrived attempt at continuing the first two films. the pointlessness and unlikelihood of the script.

Well, how do you follow in the footsteps of ‘Silent Night, Night Deadly‘ and ‘Silent Night, Deadly Night Part 2‘, movies that both kill off their very human villains (sorry for the spoiler, but, seriously, if you’re reading this before having watched the first films, what in the heck were you thinking? :P). How do you continue a franchise of such pedigree?

Simple: bring one of the villains back.

And so it is that ‘Silent Night, Deadly Night 3: Better Watch Out!’ brings Ricky back from the first sequel, leaving him in a coma (and with his brain exposed – after having being pieced back together by doctors). Eric Freeman didn’t return in the part, however (likely because being in a coma is too subtle for his brand of “acting”) so it’s Ricky in name only.

The rest of the characters and the setting are not just unrecognizable, they’re wholly unfamiliar: Laura is a blind girl with developing psychic powers who is being experimented upon by Dr. Newbury. In the process, she unknowingly develops a bond with Ricky, tapping into his horrific childhood memories. Unfortunately, this awakens the Kraken (so to speak).

And so it is that a nearly-catatonic Ricky wanders out of the hospital on a quest to find Laura, who has gone to her grandmother’s for Christmas dinner with her brother and his girlfriend. Along the way, Ricky will kill pretty much everyone he encounters, leaving enough clues for Dr. Newbury and Lt. Connely to eventually find their way to him.

Honestly, ‘Silent Night, Deadly Night 3’ has very little to recommend it. It’s too far from the original formula to satisfy fans of the series, too close to the original formula to make sense, and it doesn’t deliver any of it especially well. Even its attempts at subtly building suspense (instead of relying on gore and violence) are too obvious to succeed.

The worst of it is that most of the supposedly scary bits are merely Laura’s visions, creating a sense of remove as we know that the threat isn’t real. And when it’s not in Laura’s mind, then the sequences are so unrealistic that we can’t buy into them – like having Ricky grab a character by punching his arms through the front door (made of paper, was it?).

It also doesn’t make any sense most of the time:

Look, the cast does its best with the material at hand, but there’s simply not much to be done with it. This was likely a paycheque gig for all of them. What was surprising was to find Robert Culp slumming it here and two ‘Twin Peaks’ alumni in the same picture (Richard Beymer as Dr. Newbury and Eric Da Re as Chris, Laura’s brother). How did this happen?

Clearly, this was a low-budget movie made in a hurry: Monte Hellman (of cult classic ‘Two-Lane Blacktop’ fame, and who also did work on Roger Corman’s ‘The Terror’ and Paul Verhoeven’s ‘Robocop‘) reportedly rewrote, shot and edited this picture in just over two months. From that perspective, it’s impressive. But it doesn’t add to one’s enjoyment.

When the producers subtitled the film “Better watch out!”, they weren’t kidding.