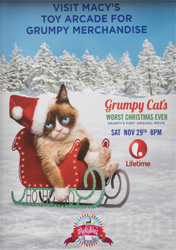 “Just sit there and look bored.”

I’ve been dismissive of Grumpy Cat of late. After discovering Grumpy Cat through ‘A Grumpy Book‘, which had delighted me with its sardonic humour and made such an impression on my friends, I wound up being overexposed to the terminally displeased feline. It all culminated with the ‘The Grumpy Guide to Life‘, which was so pathetically uninspired that I switched off.

But a friend of mine remains a big Grumpy Cat fan and, for Christmas 2014, I bought him the DVD of ‘Grumpy Cat’s Worst Christmas Ever’ along with the accompanying soundtrack. I had heard mixed things about it, but I figured that it was worth the gamble and -at the very least- the novelty would be worth the price I’d paid. It turns out that he really loved the picture.

So I decided to give it a try.

The made-for-TV movie, which was produced for the Lifetime Network in 2014, follows the misadventures of Grumpy Cat (playing herself) after she becomes psychically bonded to Chrystal, a young employee of her pet store. The pair find themselves trying to prevent the theft of JoJo, a rare million-dollar dog, the sale of which is the only thing preventing the store’s bankruptcy.

Naturally, there are villains, in the form of two rockers who are planning on stealing JoJo so that they may use the money to go on tour. They’re silly and inept, as one might expect in this type family of programming, and they spend the large part of the picture chasing after Chrystal and Grumpy through the empty mall, trying to prevent them from preventing their misdeed.

Will Chrystal and Grumpy succeed? Ahem… we’ll leave you to guess.

The plot is rail thin, run-of-the-mill and nothing too far removed from popular films like ‘Home Alone‘, but it’s merely a vehicle for Grumpy, whose views on the characters, events and life in general are the source of most of the humour. Voiced sullenly by Aubrey Plaza, Grumpy is frequently poorly-inserted into the picture to make snarky pop-up comments.

This is the highlight of the picture.

The whole film is about the presentation. The comments are amusing, but not nearly as sharp as the original memes were, so what really drives this TV movie is how it’s delivered – with Grumpy constantly breaking the fourth wall, changing the events to suit her needs, setting up funny commercial transitions and, in a failed attempt at irony, peddling Grumpy wares.

It’s all very predictable, down to the car chase at the end (yes, Grumpy can drive!), and the performances are typical television fodder, but it’s nevertheless a pleasing slice of ironic and self-consciously quirky humour that might appeal to some degree not only to fans of Grumpy Cat, but also of such pop culture savvy shows as ‘Mystery Science Theatre 3000‘.

Bottom line: I watched ‘Grumpy Cat’s Worst Christmas Ever’ once. It wasn’t awful.

It might even be the best worst Christmas ever!