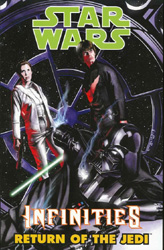 Summary: When the plan to rescue Han Solo from Jabba the Hutt falls apart, Princess Leia, Lando Calrissian, and Chewbacca embark on another rescue mission that puts them into direct conflict with Boba Fett. Meanwhile, Luke’s late arrival on Dagobah ends with him being captured by Darth Vader and the Emperor, just as the second Death Star is about to go on-line! Will the return of the Jedi become the end of the Jedi? The surprising climax is as exciting as that of the film on which it is based, but different from anything Star Wars fans have seen before!

I don’t know anyone who doesn’t think that ‘Return of the Jedi‘ is the weakest entry in the original ‘Star Wars’ trilogy. Even the die-hard fans, those who think that even ‘ROTJ’ can do no wrong, would usually put ‘Star Wars‘ or ‘Empire‘ above the series’ concluding chapter.

And so the ground is fertile for a re-imagining of the story, a tweaking or even a grand tinkering that takes it in a new direction, that improves on some already fairly imaginative material. All the more reason for this final volume in the ‘Star Wars: Infinities’ comic book series.

Unfortunately, as with its cinematic forbear, the impression one gets with this version of ‘Return of the Jedi’ is that it was conceived merely to wrap things up, to get the whole thing out of the way; it doesn’t feel inspired in a significant way; the twist is forgettable.

In the first volume (which I refuse to call it ‘A New Hope’), the Death Star wasn’t destroyed, Leia was captured and turned to the dark side. Slap in the face. In ‘The Empire Strikes Back‘, Han’s tauntaun dies earlier, leaving Luke to die from his injuries and frostbite. Punch in the gut!

In ‘Return of the Jedi’, the biggest twist is that Leia’s attempt to get Han back from Jabba goes awry, and Boba Fett escapes with the carbonited smuggler. Naturally, this changes the plan, as Luke and Leia look for Han and the rebel forces have to attack without him on Endor.

Look, it’s not really a terrible twist in the tale, but it’s also not particularly compelling: The rebels have to contend with aggressive Ewoks, Leia is captured and finds herself in the throne room with Luke, Vader and the Emperor at the end, and everything ends well for the Rebellion.

Except that much of it feels false, contrived as though the writers couldn’t find a natural way to make the events unfold the way that they wanted. So I wound up reading through with a certain level of incredulity and couldn’t at all immerse myself in the story unfolding before me.

(Answer: so that Lando would recognize her and prevent Boba from shooting her. Sigh…)

And, if so, if the detonator provided enough time to take Han off the wall, and carry him out… again, then why not just toss the thermal detonator out of the window?

And, anyway, why was Yoda concerned about Luke being late, when he should easily have been able to see the reason for his tardiness through the Force?

Then again, that’s not the case in the prequels, is it?

Secondly, it’s absolutely ridiculous that Leia would go to rescue Luke on her own. Even if she were the hot-headed type, which she isn’t, she would know better. Alone against a Death Star? Hmph! Further to that, her capture is quick and unclear: okay, she got zapped, but by whom? And how?

Thirdly, Darth Vader is turned too damned easily: the moment that he discovers that he has children, he weakens and become a big pile of drooling crap. Then Luke and Leia carry him back with them (he only got his robot arm cut off, but he can’t walk by himself anymore) to the rebellion.

He becomes a good guy. And changes his armor to white. No joke.

Look, I’ll admit that Vader so-called redemption, was poorly sketched out in the original movie, but there’s no reason to make the same mistake twice. The guy has done unspeakable things in his time. He is ruled by fear and anger. He is hardened by experience. And yet he simply switches over.

Pull the other one.

Finally, with respect to Han… the book seemed to suggest that Leia’s shooting of his carbonite prison would have the most dramatic consequences, that this was the turning point. But it “only” rendered Han blind. And he still managed to help the rebellion fight. Yes, blind. So… whoopteedooh!

Honestly, there are more significant changes than this. The story doesn’t turn on this misfire.

Meanwhile, the art is merely serviceable, with the characters sometimes barely recognizable. You want a laugh? Check out the goofy-looking Stormtroopers or the clayfaced Mon Mothma. What the hey? The locations, ships and props looked perfectly fine, but the characters…? Ouch!

All this to say that this final chapter in the ‘Star Wars: Infinities’ was the least satisfactory of the lot. That seems fitting, obviously, but it’s a damned shame: it’s a lost opportunity – a once-in-a-lifetime occasion; there won’t be another chance to make this right.