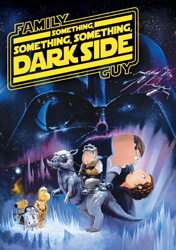 Synopsis: Holy ship! The Family Guy empire strikes back with another hilarious parody of your favorite sci-fi saga! May the laughs be with you as (Chris) Skywalker joins forces with (Peter) Solo and Princess (Lois) Leia to battle (Stewie) Vader and his Imperial minions. A host of new characters come along for the wild ride, including Mort Goldman as Lando Calrissian, Chris’ boss Carl as Yoda, and the Giant Chicken as the nefarious Boba Fett. It’s an outrageous, out-of-this-world experience you’ll “saber” for light-years to come!

eyelights: its fantastic animation.
eyesores: its limp retelling of the same exact story. its bland jokes. its soul-destroying product placement.

Well, they did it again: the crew of ‘Family Guy’ did an homage to a ‘Star Wars’ movie. This time its ‘The Empire Strikes Back‘ that gets the treatment and, like its predecessor, it’s a carbon copy of the original, but condensed into a 50-minute episode (which was aired on May 23, 2010). Hence why we call it an homage, not a spoof.

In fact, the ‘Family Guy’ crew have their tongues so far up George Lucas’ backside that they barely skewer a movie that deserves a good spanking – if only to take it off its pedestal a little bit. Instead, they are extremely reverential of the source material and merely insert a few side gags and some cynical product placements.

When ‘Wayne’s World’ first made fun of product placements, it was mildly funny: they were both poking fun at Hollywood’s predilection for sneaking products into their films for extra cash and making an actual product placement at the same time. In so doing, they were knowingly winking at the audience. It was fresh.

And, trust me, I’m no great fan of ‘Wayne’s World’. But give credit where credit’s due.

Twenty years later, the ‘Family Guy’ crew take it a notch further, by redoing complete commercials in animation! Seriously! Ever wanted to see that ’80s Juicy Fruit commercial that had young adults doing acrobatics with their skis on a snowy cap? Well, here you go! You’ve been served: you get the whole commercial, complete with the original jingle.

It’s not funny. And it’s not clever. Winking at the audience is one thing, but cynically inserting commercial plugs and serving them up as pop cultural references and/or humour is another thing. The ‘Family Guy’ crew could have briefly hinted at the ad, even changing the name of the product in order to spoof it, and that would have been funny.

Doing the whole over is just plain cynical.

That we, as a culture (if you can call it that), are so saturated with commercialism that we can no longer see when we’re being sold product, is disturbing and, frankly, disgusting. That we pay to wear labels, meaning that we are paying companies to advertise for them, is absurd. But that’s where we’re at: We’re walking billboards for corporations.

‘Family Guy’ sells this kind of crap as humour, but I wouldn’t even be surprised if the writers were given a list of product placements to pick from when they began their treatments and simply inserted the most lucrative ones wherever possible. Yes, this happens: novelists sometimes do that. It would also explain the Death Star mall from ‘Blue Harvest’.

(Hey, you take you victories where you can get them…)

As for the gags, they weren’t especially funny. The Hoth monster that Luke faces is the Cookie Monster, but this contributes nothing; he just looks like the Cookie Monster. Ha. Not. The tauntaun is a Don Don, and has Don Knotts’ face on it. M’kay. An AT-AT (one of the “giant camels”) stubs its knee. When Luke falls at the end, he does a Wile E. Coyote. Amusing.

A lot of the humour is yet again culturally insensitive. some people like to think that this is making fun of people who think this way, whereas I think that it only serves to ingrain such beliefs as being truth. Good satire would demean those who think this way; ‘Family Guy’ merely regurgitates the offensiveness verbatim – normalizing it, not condemning it.

Interestingly, instead of poking fun at ‘The Empire Strikes Back’, the show’s creators poked fun at other films (such as ‘Starship Troopers’, in the “Join the Empire” video, or ‘Rocky 4’ in their overly lengthy montage of Luke’s training – inserting actual footage from the movie). Their job was to spoof ‘Empire’, but they spoofed other films!

Oh, they did write in some half-hearted ribbing along the way, including a clichéd reference to the Stormtroopers’ much-derided markmanship (“Have you ever hit anyone with these guns” “I hit a bird once”) or a jab at the fact that Luke and Leia know where Han is being taken, but will only go to rescue him three years later, in ‘Return of the Jedi’.

The only two truly memorable bits for me were when, in the original, Leia tells Han that she loves him and he responds nonchalantly (here he plainly tells her off), and the closing bit that had Seth MacFarlane and Seth Green insulting each other (again, as in ‘Blue Harvest’). The problem with the latter is that it’s all an inside joke; few would get this.

If anyone were to watch ‘Something, Something, Something Darkside;’, it would have to be for the animation, which is simply fantastic. The attention to detail in these ‘Star Wars’ rehashes is phenomenal. I swear they’re just tracing. But jokes (or what passes as jokes) are bland. ‘Family Guy’ is far too reverential of the original material for its own good.

You’re better off watching the original with a RiffTrax commentary instead.