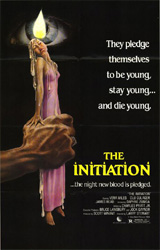 Synopsis: A long-buried family secret comes back to haunt the present, and a sorority ceremony becomes a real hell night for Kelly Fairchild (Daphne Zuniga of One Tree Hill and Melrose Place). But when Kelly and her three girlfriends play one final prank by breaking into the department store owned by Kelly’s stepfather, an initiation into a real nightmare of terror begins! Clu Gulager (Return Of The Living Dead) and Vera Miles (Psycho) co-star in this ’80s horror favorite.

‘The Initiation’ is a 1982 slasher film starring Daphne Zuniga (‘The Sure Thing’, ‘Spaceballs’, ‘Melrose Place’), in her first lead role, and featuring a guest appearance by none other than Vera Miles (‘Psycho‘, ‘Psycho II‘).

I first stumbled upon it at a pawn shop, at a time when a buddy of mine and I used to dig up rare and unusual films on VHS tapes to give as birthday and Christmas gifts – both to delight and challenge one another.

And, sometimes, we drew each other’s dismay, if not ire.

In any event, I got a good deal on these tapes, something along the lines of 5 for 10$ and eagerly looked forward to giving them to him. We usually watched the movies before giving them away, and I proceeded to do just that.

I immediately loved ‘The Initiation’.

It’s a bit of a guilty pleasure of mine. While I recognize that it’s not a masterpiece, it appeals to me late at night, when I’m looking for cheap thrills and something that isn’t too demanding of me. To me, it’s mindless good fun.

‘The Initiation’ takes us to the final days of Delta Ro Kai’s initiation of some new pledges into the sorority. Having now dwindled their numbers down to four candidates, their leader, Meaghan, has one last challenge for the girls.

Knowing that Kelly (Zuniga)’s father is the wealthy owner of a high end mall, she hatches a plan for the new recruits to break into the mall and steal the security guard’s uniform. Although she’s reticent at first, Kelly eventually agrees.

What they don’t know is that there is a psycho on the loose, and that he/she is after Kelly. And it so happens that this individual is well-known to her parents, and had been interred in a mental facility up until the night before.

All of this is rooted in an awkward expository prologue that finds a 9-year-old Kelly waking in the middle of the night to sounds of lovemaking. Curious, she goes to her parents’ bedroom and catches her mother and a man in the heat of passion.

It’s not clear who the man is, but I immediately assumed he wasn’t the father since we rarely see parents this passionate on screen; their sex lives are usually neutered. Anyway, she winds up stabbing him for some unknown reason.

Immediately following that, another man, dressed in a business suit (which also suggests he lives there and was coming home), arrives and the two men fight. The scene ends with the latter being burned to a crisp near the fireplace.

It’s not clear if this is a memory or just a figment of Kelly’s subconscious as this is a recurring nightmare that she’s been having since the age of nine (before which her memory is a blank slate). It could very well be a bit of both.

But it’s suggested that the psycho killer that’s on the loose was in that room, either the father or the other man. However, a few dozen patients have been let out of the institution at once and we don’t know which one is after Kelly.

And what his/her/their relation to her is.

Further to that, the institution’s gardener is a severely burn-scarred middle-aged man, who could easily be the man from Kelly’s nightmares. He has a limited role in the picture, but he’s one of the many potential red herrings strewn about.

Pointing in the general direction of the gardener is the killer’s modus operandi, which frequently consists of killing with a gardening tool. But not always: a machete is also used, as is a knife, an axe, a bow and arrow and a spear-gun.

They are in a mall, after all, and it has a sporting goods store.

Since it’s set late at night, the mall is closed, but the picture still has plenty of potential victims – not just in the four pledges, but in the supporting cast, which includes a few boys who were sent to scare the girls whilst on their quest.

The picture does take its time (48 mins!) setting up the cat and mouse mall sequence, which is something I like. Sadly, the exposition is clunky and there’s a subplot of Kelly falling for her psychology prof, then subjecting herself to his dream tests.

At least this introduces an interesting character in Heidi, the teacher’s assistant. While Deborah Moreheart (now known as Hunter Tylo) delivers a poor performance, Heidi is an unusual, quirky, and intriguing character.

The character later serves her purpose because she’s smart and starts to dig into Kelly’s family history, slowly putting the clues together. Without her, the lot of them would remain clueless to the end – which, for many, is relatively soon indeed.

This is a slasher film and it’s quite apparent in the deaths themselves. While not especially gory, the violence gratuitous – as is the nudity, which isn’t ample (full-frontal changing and showers), but is nonetheless exploitative of its nubile young cast.

Which is my general feeling about ‘The Initiation’. It’s quite akin to the cravings one gets for a particular type of junk food: you know it’s complete crap that won’t nourish you in any way shape or form, but sometimes you allow yourself to indulge.

I always regretted having to give that one and only known copy of the tape to my buddy, because I hadn’t backed it up first for future viewing – especially when I discovered that he didn’t get the same satisfaction out of it that I did.

So imagine my enthusiasm when I discovered that it had been released on DVD! I just had to pick it up! I’ve only watched it twice since then (too many movies, too little time), but it’s very likely I’ll give it a few more spin during its lifetime.

What surprises me is that it hasn’t been remade. In an era when even the lowest order cult classic is being modernized for the masses, you’d half-expect this baby to get a facelift. It not only needs it, but I firmly believe that it deserves it.

I would certainly pay to see a new and improved version of ‘The Initiation’.