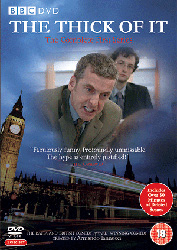 Synopsis: All three episodes from the first series of BBC4’s satirical political comedy series written and directed by Armando Iannucci. The caustic comedy, set in the corridors of power, follows the career of Hugh Abbot (Chris Langham), a put-upon MP who is continually harassed by Number 10’s foul-mouthed policy enforcer Malcolm Tucker (Peter Capaldi) and is dependent on his not-so-reliable team of civil servants.

‘The Thick of It’ is a BBC comedy series that first began in 2005 and has since run for four series, as well as two one-hour specials and a spin-off film called ‘In the Loop’. It has been widely acclaimed as a modern version of ‘Yes, Minister‘ and has been nominated for and won a number of prestigious awards, including a few BAFTAs.

I saw ‘In the Loop’ first, many years before I’d even heard of this show. I had loved the picture and it remains a very fond and vivid memory, so when I found out that there was a predecessor to it, I was naturally curious. When a work colleague raved about it and told me it was a must-see, I made a point of getting my hands on it.

I had no idea what I was in for.

Firstly, I didn’t know that it followed a similar premise as ‘Yes, Minister’; I purposely went in cold. I didn’t know that the show was focused on the dynamic between a Cabinet Minister’s office and the Prime Minister’s Director of Communications, who wields enough power and venom that he can intimidate anyone into doing his bidding.

Secondly, I had no idea that the tone would be so caustic; whereas ‘Yes, Minister’ was deeply cynical, ‘The Thick of It’ is utterly brutal: Malcolm, the Director of Communications, is a cursing, shouting bully who is extremely good at what he does, but what he does is anything but good. His ethic is The end justifies the means. Always.

The show is shot with handheld cameras in a documentary style, giving it an added sense of realism that contrasts it from ‘Yes, Minister’ with its static cameras, studio sets and laugh tracks. This makes the verbal assault even more potent because each situation becomes that much more awkward; one feels like you’re in the room.

Interestingly, the first series consist of only three episodes. I know that show creator Armando Iannucci was given a limited budget to put the series together, so perhaps he preferred to put the money to casting and production – you know, quality over quantity. But I’ve never seen a series that was so deliberately short before.

Episode 1: Our introduction to the series finds Malcolm canning a Minister after being nice to him. He’s not just two-faced, he’s brutal. Later, the newly-minted replacement Minister is trying to announce a new program and Malcolm is on his @$$ because he didn’t run it by Treasury first. Meanwhile, his staff is spreading the word as planned and the Minister has to change the content of his news conference at the last minute to reflect Malcolm’s wishes. Things totally unravel. Spectacularly.  8.5

Episode 2: The Minister is criticized in the press, so his team and Malcolm plan an attack strategy to discredit those who’ve taken him down. They’re also trying to get policy out but depend way too much on focus groups – deciding in the end to focus on a particular focus group member, whom they deem to be the everywoman. This doesn’t go at all well and they are forced into damage control mode. There’s some serious bullying and insults flying about in this one. 8.5

“Feet off the furniture you Oxbridge twat, you’re not on a punt now.”

Episode 3: The Minister is a bit envious of one of his colleagues, who’s a young up and comer. But then there’s some controversy surrounding a second property that he holds but isn’t currently living in. I didn’t really understand what the stakes were, something to do with a housing bill he was trying to pass, that it might look bad somehow. In the end, there’s panic about who will get fired and we find that they’re all cowardly and self-serving. Big surprise. 8.25

The performances are all around excellent, but without a doubt the standout is Peter Capaldi as Malcolm. The character, as written, is already unforgettable, but in Capaldi’s hands he is like an M60 shooting through a bakery. He’s psychotic. In real life, Malcolm would be impossible to like, but one can’t help but be awed by his ability and knife’s edge.

The main problem with the show, I’m sad to report, is its also its greatest strength: its deeply cynical look at backroom politics. While it’s funny to watch psychopaths, sycophants, cowards and egotists intermingle, it’s also dreary and heavy. When one considers that this is possibly what really goes on, it leaves one with a terrible aftertaste.

After just three episodes, I felt like I’d been pummeled into submission by the show’s caustic humour and the ferocity of its delivery. I loved it, but I suspect that three was enough in one go. Let’s just say that I was glad to get in ‘The Thick of It’s in small doses, even as I am looking forward to seeing the next series. It’s a knock-out.